The defender from the Netherlands has grown both on and off the field to become a key cog in Iowa’s solid back line. 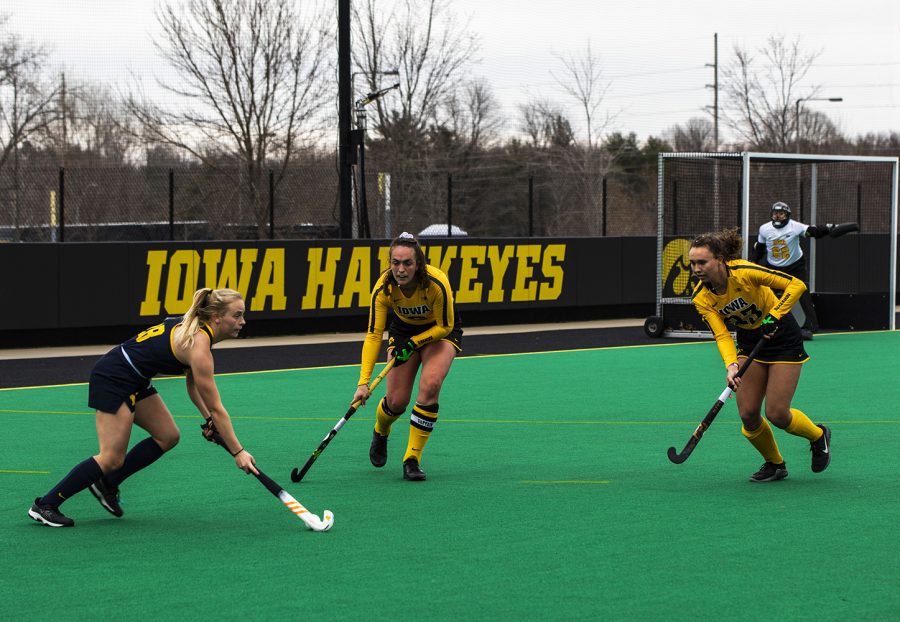 Michigan Forward Sarah Pyrtek works to move the ball around Iowa defenders Anthe Nijziel (6) and Harper Dunne (23) during a field hockey game between Iowa and Michigan at Grant Field on Saturday, March 15, 2021. “The Hawkeyes defeated the Wolverines, 2-1, in a shootout.”

This season, Iowa field hockey’s defense has been stellar under seventh-year head coach Lisa Cellucci. Thanks in large part to the efforts of junior defender Anthe Nijziel, Iowa has only surrendered four goals in its first seven games.

Since she arrived in Iowa City in 2018, Nijziel has been in Cellucci’s starting lineup.

The first game and start of Nijziel’s Hawkeye career came against then-No. 14 Wake Forest, and she did not disappoint.

Nijziel and the Hawkeye defense gave up just one goal in what amounted to a 2-1 Iowa win.

That game proved to be a tone-setter for the entirety of the Hawkeyes’ 2018 campaign, as Iowa would go on to hold its opponents to 1.10 goals per game for the remainder of the season.

The following season, Nijziel once again started in all of Iowa’s games, helping the Hawkeyes hold their opponents to 1.23 scores per game on 6.14 shots per contest.

Despite the quick start to her career in the Black and Gold, Nijziel has continued to make strides on the field throughout her career.

“Every part of her game, her tackling, her individual defense, and her distribution, has gotten better and better,” Cellucci said. “To cap that with her fitness and physical presence as she’s just gotten stronger and faster — that’s made a world of difference.”

Nominated as one of this year’s team captains, Nijziel has become a leader off the field as much as she is on the field.

“She’s a great leader on and off the field, and she has a voice,” sophomore midfielder Soffie Stribos said. “Her passing ability is amazing, and also her organization. She’s a really big strength of this team and we wouldn’t be where we are today without her.

Nijziel has been an offensive threat too — especially during penalty corners. The Eindhoven, Netherlands, native finished the 2019 season with 13 points to her name, including six goals and an assist — good for seventh-best on the Hawkeyes’ roster.

Nijziel said she developed her competitive edge at a young age, when she played field hockey against her brother.

Nijziel comes from a field hockey family. Both her parents played field hockey, and her father coached her until she was 12 years old.

“It was always very competitive because we would play field hockey in the streets and it was always really fun to play together,” Nijziel said.

Nijziel has carried her award-winning momentum into the 2020-21 season too, as she has already claimed Big Ten Player of the Week honors on one occasion.

For Nijziel, however, individual awards will never be as satisfying as team victories.