The Hawkeyes’ inexperienced back row has caused Iowa to struggle defensively this season. 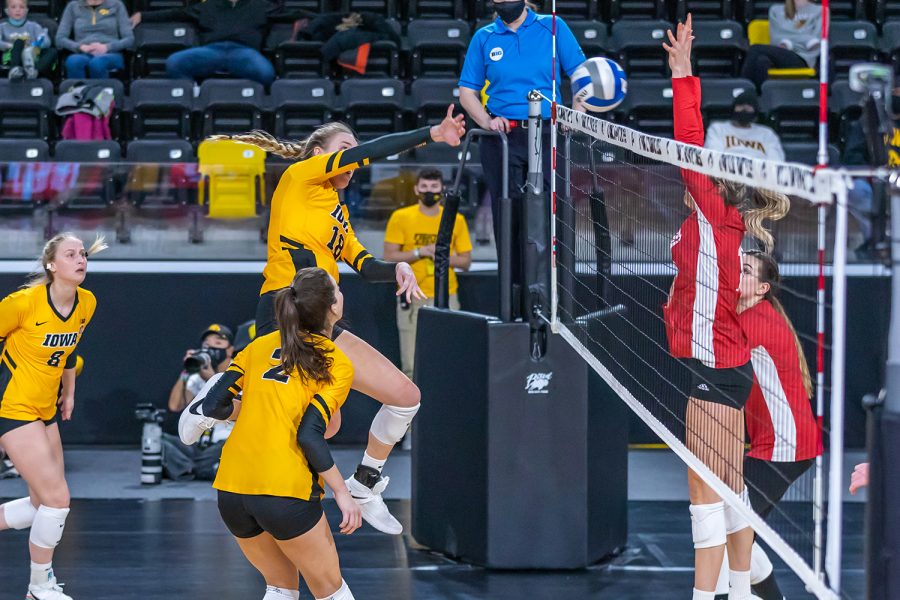 Iowa Middle Blocker Hannah Clayton hits the ball over the net during the Iowa Volleyball game against Indiana on Feb. 6, 2021 at Xtream Arena. Indiana defeated Iowa 3-2.

In 2019, Iowa volleyball ranked eighth in the Big Ten in digs per set.

This season, the 3-13 Hawkeyes have fallen to 13th in the league in digs per.

“As we go further in the season, teams are progressing,” sophomore libero Joslyn Boyer said. “Offenses are getting better as we have played more games.”

Boyer took the reins at libero after Johnston and Iowa’s two other seniors — setter Brie Orr and hitter Griere Hughes — opted out of the 2020-21 season because of COVID-19.

In Johnston’s absence, Boyer has led the Hawkeyes in digs with 214. She is also Iowa’s third-best passer, statistically, as she has recorded 44 assists so far in 2020-21.

“I have definitely seen a lot of people progress at different rates,” junior defensive specialist Maddie Slagle said. “Joslyn has stepped up as a leader.”

Slagle is Iowa’s only upper-class defensive specialist. In the early portion of the Hawkeyes’ 2020-21 schedule, Slagle split time in the starting lineup with freshman Leanne Lowry.

RELATED: Iowa volleyball gets blown out by No. 4 for second match in a row

Despite Slagle’s presence, Iowa is still the youngest team in the Big Ten, and the Hawkeyes’ inexperience is often on full display in their back row.

Three of the program’s four defensive specialists are underclassmen, and their starting setter, Bailey Ortega, is a freshman.

“We’re definitely progressing,” head coach Vicki Brown said. “Every weekend we are seeing different digs that we were not getting a week or two ago.”

Lowry was, at one point, a player that the Hawkeyes hoped would make an immediate impact on defense. Of late, however, Lowry’s playing time has drastically decreased.

After starting six matches at the beginning of the season, Lowry has now been relegated to showings like her one-set appearance in two games against Nebraska last week.

Brown has repurposed the minutes that used to belong to Lowry, as she has elected to move some of her pin hitters and middle blockers — like sophomore Blythe Rients and Edina Schmidt — to the back row.

With Rients and Schmidt playing out-of-position, the need for Boyer to play well has been amplified.

“In that situation, I’m kind of the only one back there, and I have to really take charge,” Boyer said. “[I have to] help whoever is next to me and do my best to take up as much court as I possibly can. That’s what I get put out there to do and that’s what I’m going to do.”

While the Hawkeyes have certainly struggled defensively this season, Brown still believes her team has continued to improve throughout the season.

“Any time that you can see a transfer from what you are working on in practice into the court, then that’s progression,” Brown said.

Iowa’s next two matchups will also serve as the Hawkeyes’ last at Xtream Arena this season, as Iowa welcomes the Spartans to Coralville to close the book on Xtream Arena’s inaugural volleyball season.