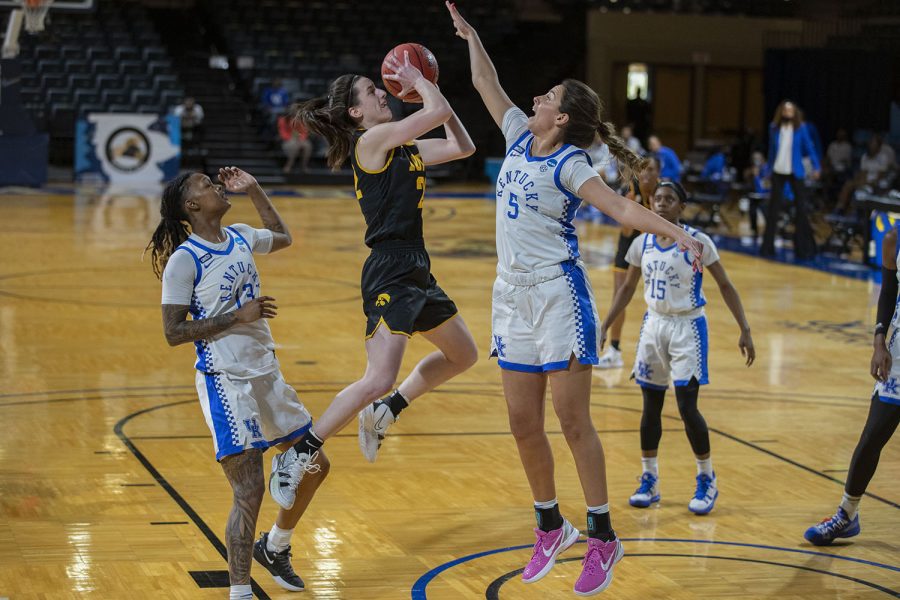 Iowa guard Caitlin Clark goes for a layup during the second round of the NCAA women's basketball championship against No. 4 Kentucky on Tuesday, March 23, 2021 at the Bill Greehey Arena at Saint Mary's University in San Antonio, Texas. The Hawkeyes defeated the Wildcats, 86-72. No. 5 Iowa will go on to play the winner of tonight's 8 p.m. game between No. 1 UConn and No. 8 Syracuse in the Sweet Sixteen starting on Saturday.

Tangela Smith previously held the record of 32 points — which she scored against UMass in 1998.

On her way to 35 points, Clark also poured in six 3-pointers — good for a program-best. Four other Hawkeyes shared the previous record of five 3-pointers in a single NCAA Tournament game.

In the first half, as an individual, Clark outscored Kentucky as a team, tallying 24 points compared to the Wildcats’ 22.

“I was feeling my shot there, really in the first half,” Clark said. “When it’s going, you just keep shooting it.”

“I liked the court, obviously,” Clark said. “It seemed almost like a high school court, in a way. The arena was very compact. It was a shooter’s gym, and I told [head coach Lisa Bluder] that in our shootaround.”

Clark’s immaculate showing on Tuesday should come as no surprise, as she has only improved as the stakes have gotten higher this season — a telltale sign of her maturity, according to Bluder.

“I am so impressed by her mental maturity,” Bluder said. “To be identified as one of the top freshmen in the country, and then second team All-American, she doesn’t let it go to her head. She’s been managing all that, and that can be a lot to manage. And she lives for these kinds of experiences, she’s best on the big stage. She has it now, she’s enjoying it, and she’s getting better all the time.”

While Clark did outscore Kentucky’s entire roster in the first half of Tuesday’s game, she still gets help from her teammates.

Clark and junior center Monika Czinano have proved to be a potent one-two punch for Iowa this season. Czinano is the only other Hawkeye averaging double-figure scoring this season at 14 points a contest. Czinano has also shot 67.2 percent from the floor this season — tops in all of NCAA Division I Women’s Basketball.

“[Czinano] plays in the shadows of Caitlin, but she leads the United States in field goal percentage,” Bluder said. “It’s not like she snuck up on anybody. Last year, she was second as a sophomore … she does such a great job with her footwork, and she has such a great release. I’m really, really happy for Monika.”

Czinano is the only member of the Hawkeye starting five to experience a Sweet 16 prior to this season. In 2019, the Watertown, Minnesota, native played behind former National Player of the Year and current WNBA player Megan Gustafson on the way to the Elite Eight.

Now, the Hawkeyes have qualified for the Sweet 16 for the second time in as many NCAA Tournaments.

“Going on to the Sweet 16 is something special,” Clark said. “They didn’t have us in the field to start the season, but this team just believed. We believed in the coaches, the coaches believed in us, and we worked hard every single day. So, that’s what we’re going to continue to do, we’re going to keep being us going into the Sweet 16. But this is an awesome feeling, something you dream of since you were a little kid.”