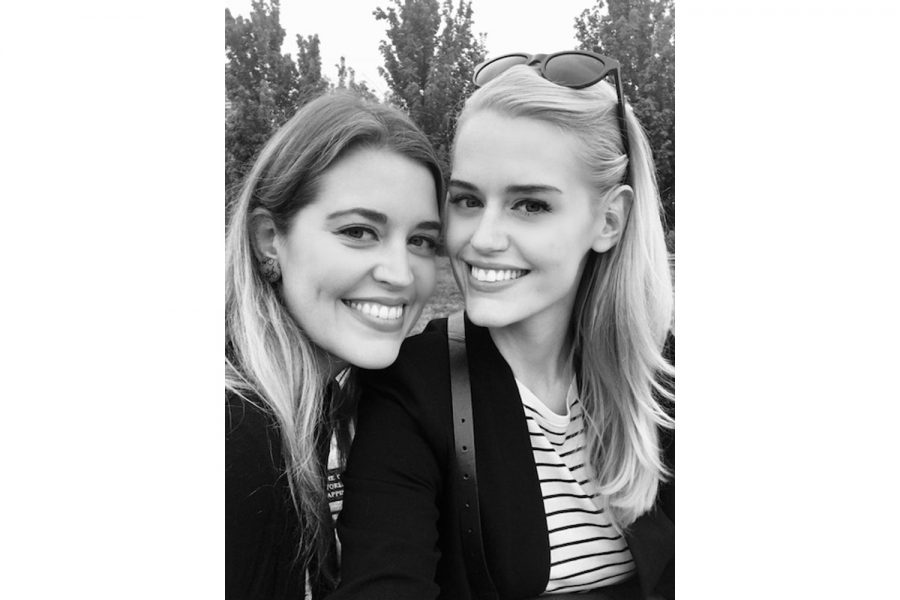 Sisters Shannon (left) and Erin (right) Huebscher host of their podcast, “Pod Across the Pond” about German culture, current events, their life stories.

With the suspension of international travel because of COVID-19, sisters Shannon and Erin Huebscher haven’t seen each other for 14 months.

Both University of Iowa alum, Erin lives in Hamburg, Germany, and Shannon lives in Minneapolis, Minnesota –– over 4,000 miles apart. Shannon said she and Erin connect daily in a virtual manner but wanted to start to record their conversations and add structure to them.

In Germany, Erin works remotely for a tech company in addition to a beauty company based in Sweden. Shannon works in experiential marketing in Minneapolis. At the UI, Shannon graduated in 2003 with a degree in English and Erin in 2006 with a degree in journalism.

On Jan. 29, Shannon and Erin released the first episode of their podcast, “Pod Across the Pond.”

“The podcast really kind of started out as just like a fun creative outlet for the two of us to connect. Since we started, we’ve had tons of fun,” Shannon said.

Erin said the idea of the podcast started when Shannon sent a detailed email with an outline of the project.

“Shannon was like the mastermind behind the podcast,” Erin said. “At first I was like, ‘I don’t know if this is something that we could do’, and then I thought about it and we just ran with it.”

In each episode, the Huebscher sisters discuss culture and world events. Shannon said knowing Erin’s unique perspective as an expat living in Germany, the duo often shares stories that compare lifestyles in Europe and in America.

“I always get asked the question like, ‘what’s it like to live in Germany?’ I lived in Sweden before for five years and I also lived in the UK, so you get a lot of questions like ‘how is it for you?’” Erin said. “I think something like this is just a good way to kind of explain that in a digestible manner.”

On an episode of “Pod Across the Pond” called “Engine Failures, Power Freezes and German Quizzes,” the sisters discussed current events including the Texas power crisis, political issues, pop-culture, traveling, and trivia about Germany.

“It is just fun to hear from our friends and family and even people now that we don’t know that are approaching us saying that they really like the dynamic between the two of us,” Erin said.

Shannon and Erin’s dynamic dates back to when they created home videos together as children, Erin said.

The majority of the podcast’s audience so far is family, friends, and acquaintances, Shannon said. But there have been some listeners from as far as Vietnam.

Because of a six-hour time difference, Shannon said she wakes up early in the morning in Minnesota, when it’s the afternoon in Germany, to record the podcast to work around their full-time job work schedules.

“We have our topics we’re going to talk through, but all of the editing and finding the music and getting it uploaded was just my own research that I did to figure out how to do it,” Shannon said. “It’s just been kind of a one-woman show trying to get us online and on the platforms.”

Chelsea Brooks, an alum of the UI who also lives in Hamburg, said she connected with Erin through social media. Brooks also has a multimedia background and created a blog centered around life in Germany and language speaking.

Brooks graduated from the UI in 2014 with a major in linguistics and moved to Germany with her partner after she graduated. She said if someone has the opportunity to live abroad during their years of studies at the UI, they should do it.

“There are a lot of opportunities outside of Iowa or outside of the U.S. So, look into it and see if it’s for you,” Brooks said.

Erin said she will have Brooks on the podcast at some point to discuss the “expat” lifestyle that they both follow.

While the podcast is currently a side project for Erin and Shannon, Erin said they would both love to see it grow.

“If we can start to do this more frequently and we can build our listener base, we could actually start considering it to be more of a true side hustle versus just like a side project,” Shannon said. “I think that would kind of be an amazing goal to have and I think we would both be game for it too.”