After Iowa's NCAA Tournament loss to Oregon on Monday, Garza's record-breaking Hawkeye career is over. 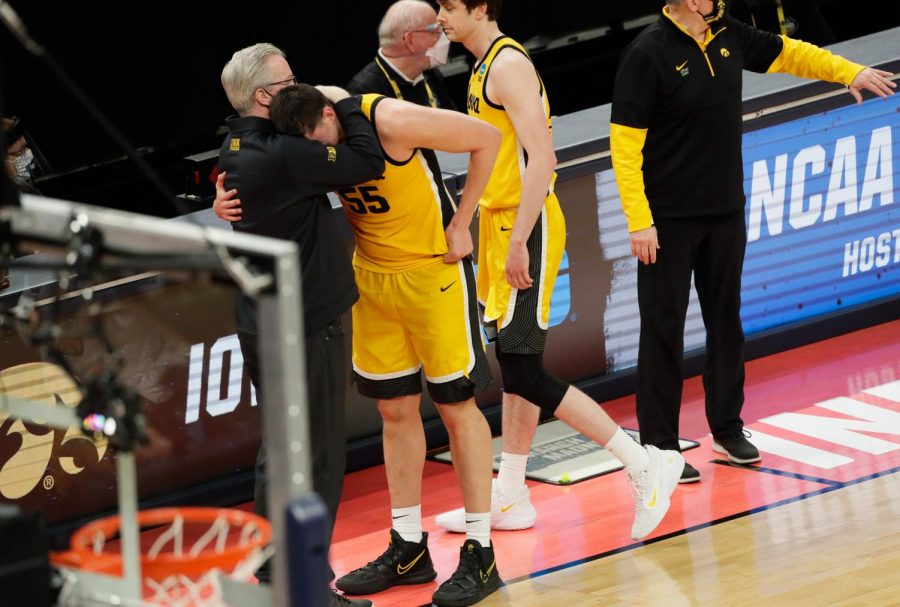 INDIANAPOLIS — In the closing seconds of his record-setting Hawkeye career, Luka Garza walked off the court and lowered his head onto his head coach’s shoulder while the Oregon players on the floor anxiously awaited their opportunity to celebrate.

The seventh-seeded Ducks upset the No. 2 seed Hawkeyes, 95-80, on Monday in the second round of the 2021 NCAA Men’s Basketball Tournament. With the game all but over, Fran McCaffery pulled Garza from the floor with 35.6 seconds left, and the senior center embraced teammates Austin Ash and Michael Baer on his way to the bench.

“MVP” and “Thank you Luka” chants rang through the Bankers Life Fieldhouse as the limited Iowa fans in attendance gave Garza a standing ovation while they watched No. 55 walk off the floor for the final time as a Hawkeye.

“It’s heartbreaking,” Garza said while holding back tears postgame. “It’s so surreal that it kind of just all hit me at once that this is the last time that I’ll put on this jersey. That hurts a lot.

“I just feel bad that I wasn’t able to lead this team to where it needs to go, and we did a lot of really, really good things this year, and it just hurts that we weren’t able to do it when it mattered most, and that’s something that’s going to haunt me forever.”

Garza scored 36 points (14-of-20 shooting) against the Ducks to tie the most a Hawkeye has ever scored in a tournament game. In the process, the Washington, D.C., native and two-time Big Ten Player of the Year broke his own program record for the most points scored in a single season.

But it wasn’t enough.

After a Garza basket with 2:10 remaining in the first half tied the game at 46-46, Oregon went on a 10-0 run to end the half. The Ducks, who shot 56 percent from the floor (44 percent from 3-point range), led by as many as 21 points in the second half before eventually winning by 15.

The Hawkeyes entered the season as the No. 5 team in the nation, and stayed in the top-10 for nearly the entire season. The team’s No. 2 seed in the tournament was the program’s highest since 1987. After an All-American junior season, Garza returned for his senior season at Iowa rather than turning pro so he could lead Iowa on a deep postseason run this year.

Instead, the Hawkeyes, who end the season 22-9, have been bounced from the tournament in the second round.

Luka Garza on walking off the court for the last time as a Hawkeye: “I’ve been so blessed and so lucky to be able to play here at the University of Iowa, and it changed my life.”

“I really wanted to take this team and lead this team to where we could be,” Garza said. “I felt like this was a team where our season wasn’t supposed to be over today.”

Garza is the Iowa men’s basketball program’s all-time leading scorer and the program’s only two-time consensus All-American. He is the only player in program history to ever be named the national player of the year — an honor Garza has received from outlets both of the last two seasons.

“I couldn’t be more thankful to play with a guy like that,” said junior guard Joe Wieskamp, who declined to address his future at Iowa after the game. “His leadership throughout this whole pandemic, all the ups and downs, it’s been a privilege to play with him.”

One day, Garza’s No. 55 jersey will hang in the rafters at Carver-Hawkeye Arena.

Garza’s time as a Hawkeye may be over, but his legacy will last for years to come.

“I have been truly blessed to have had the opportunity to have Luka be on our basketball team for the last four years,” McCaffery said. “His leadership, his work ethic, his determination, his example for the young players, his consistency of effort and performance —  we may never see another one like him.

“Certainly we’ve had some great ones that have worn the Black and Gold, and he’s right there at the top. I think that’s the legacy that he will leave, and that’s why I think everybody in Hawkeye Nation just so appreciates who he is.”

Garza came to Iowa as the No. 100 recruit in the nation. Many of the traditionally elite programs around the country weren’t interested in him. Garza was called too slow, he wasn’t athletic enough.

The 6-foot-11 center worked his way into a starting role as a freshman. He overcame a life-threatening surgery as a sophomore to lead Iowa to a postseason berth after a 14-19 season the year before. He became one of the nation’s elite players as a junior. And as a senior, he cemented his place in Hawkeye history.

The pain of not making it to the second weekend of the tournament is going to stay with Garza.

He knows it will. But Garza also knows he gave everything he had to the Black and Gold until the very end of his historic career.