A study of UI health care worker reactions to the COVID-19 vaccine found respondents experienced mild symptoms after both doses. 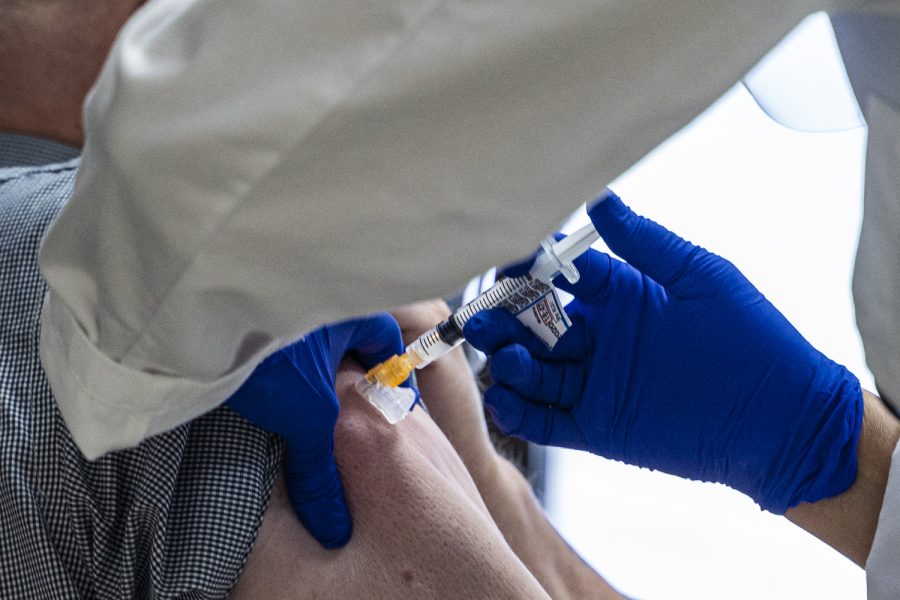 Patients are injected with the COVID-19 vaccine at the VA Medical Center in Iowa City on Tuesday, Dec. 22, 2020. The center received the Modern vaccine for its employees.

In an effort to provide further information on the side effects of the COVID-19 vaccine, University of Iowa Hospitals and Clinics has released a study that showed common side effects  experienced by health care workers after their first and second shots were mostly mild.

More than 461,000 Iowans have received both doses of the COVID-19 vaccine, and over 321,000 people have gotten their first shot — good for the middle of the pack compared to other states. As more Iowans roll up their sleeves, hospital officials say they hope people are reassured by the results that show adverse side effects are rare.

UIHC Assistant Director for Support Services Jennifer Miller said health care workers received a survey in their emails after receiving their first and second doses of the COVID-19 vaccine, in which they could report any side effects they were experiencing.

Of the 3,500 health care workers surveyed after their first vaccination, 80 percent categorized their symptoms as mild, meaning they did not limit the respondents’ activity.

The most common side effect following the first dose was pain at the injection site, with 77 percent of respondents reporting that they experienced this symptom, according to the study.

“The data is actually very positive,” UI Student Health Chief of Staff Rebecca Chackalackal said. “Sixteen percent of people with the first shot had no symptoms whatsoever. On average, the most common [symptoms] were mild. That should make people feel more comfortable.”

The study found that respondents experienced an increase in symptoms following their second shot. After their second dose of the vaccine, 52.9 percent of health care workers still reported mild symptoms.

There was also an increase in reports of fatigue, muscle aches, and headaches. Chackalackal said those who experience these symptoms following their vaccinations should pay attention to their body.

“If you’re tired, don’t try to push through. Take a nap. Take it easy,” she said. “The most common side effect is pain at the injection site, so depending on how uncomfortable it is, you can take Tylenol or Advil unless you have contraindications to those things. You can put a warm compress if you’re sore at the site. That really takes care of most of the issues people have.”

Although this study was initially meant to inform UI health care workers, Miller said she hopes this information can help people who are feeling worried about the vaccine.

“We’ve vaccinated thousands of our own staff and collected this great information and what we’re seeing is in line with what the trials found,” Miller said. “Our data helps dispel the myths and shows that the risk benefit-ratio really favors getting the vaccine.”

Clinical Branch Supervisor at Linn County Public Health Heather Meador added that it is important to understand why people may be hesitant about the vaccine.