The Hawkeyes sent three swimmers and a diver to Greensboro, North Carolina, for the NCAA Championships. 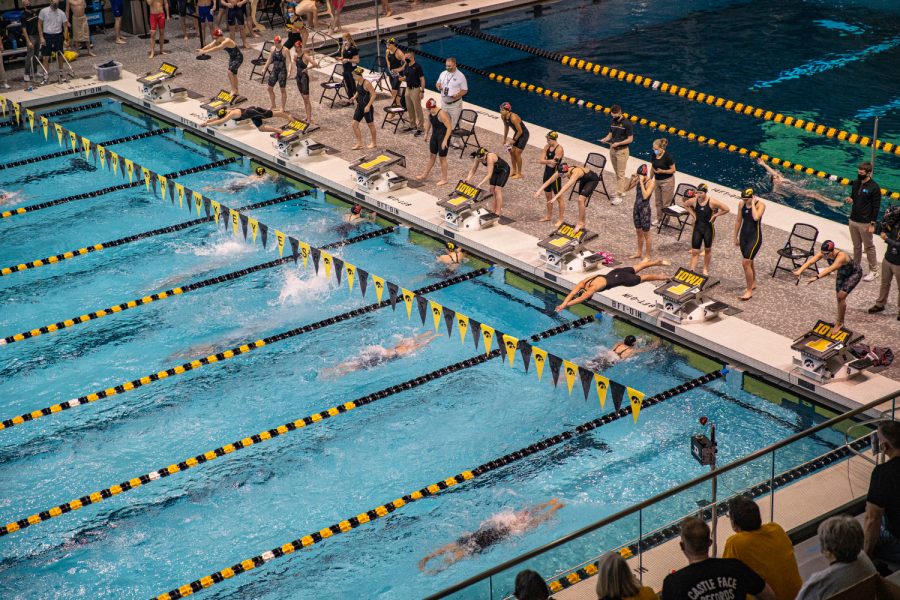 The women's medley relay is underway during a swim meet at the Campus Recreation and Wellness Center on Saturday, Jan. 16, 2021. The women's team hosted Nebraska while the men's team had an intrasquad scrimmage.

The Iowa women’s swimming and diving team officially wrapped up its season at the NCAA Championships in Greensboro, North Carolina. The meet started on Wednesday and ran through Saturday night.

The Hawkeyes had three swimmers and one diver qualify for the meet. Freshman Alyssa Graves, sophomore Mallory Jump, and senior Kelsey Drake represented the swim team, while junior Samantha Tamborski was the team’s lone diver.

This was the first time competing at the NCAA Championships for any of the swimmers. Jump and Graves received their first NCAA bids this season, while Drake qualified a year ago but couldn’t compete because of COVID-19.

Tamborski was the only member of the team who entered the week with experience at the NCAA Championships, placing 19th two seasons ago in the 3-meter dive.

Jump opened up action for the Hawkeyes on Thursday in the 200 individual medley. She recorded a time of 1:59.32 in the prelims and placed 43rd overall.

Both Jump and Drake swam in the 100 fly. Jump tied her school record of 52.30 and placed 22nd overall. Drake also saw a personal best in the event, swimming a 52.93 and taking 33rd place. The duo now holds the three fastest times in program history for the event.

In diving, Tamborski took 28th place on the 3-meter dive with a score of 274.65. The College Swimming & Diving Coaches Association of America All-American finished 10th at last week’s qualifier and posted a score of 317.90.

Will Myhre will represent the men’s swimming and diving team at the NCAA Championships later this week, which is also held in Greensboro.