Demolished Seashore Hall to be new green space by September 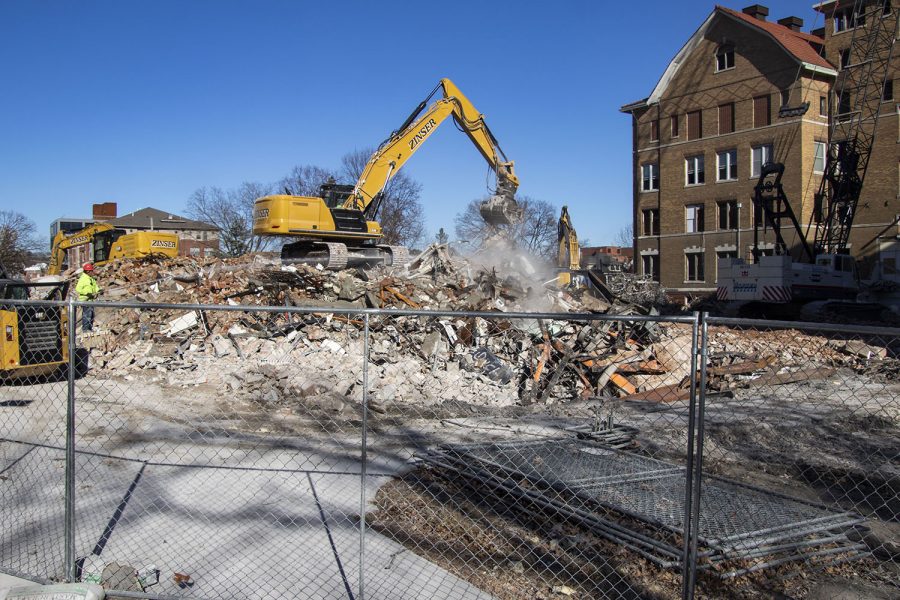 Construction equipment began the removal of the original U of I hospital, on Tuesday, Dec.1, 2020. The hospital became Seashore hall in 1929.A worker sprays down the rubble that was once the hall, to help control dust..

The University of Iowa is trading bricks for plants, reimagining a space that has been occupied for over 100 years.

On the land Seashore Hall once resided before its demolition in 2020, the university has announced plans to create a multipurpose green space as an area that could host outdoor events and classes, and provide a leisure space for students.

As previously reported by The Daily Iowan, Seashore Hall’s demolition process has been in the works since 2016, occurring in three phases to avoid displacing programs.

“Work is ongoing and in addition to everything related to the psychological and brain sciences, moves from [Seashore Hall] included: Office of the Ombudsperson to the Jefferson Building, A. Craig Baird Debate Forum to the Jefferson Building, English as a Second Language to the University Capitol Centre, and CLAS Sociology to North Hall,” UI Director of Media Relations Anne Bassett wrote in an email to the DI.

Before its final razing in late 2020, Seashore Hall has a history of serving many different university needs.

According to University Archivist David McCartney, Seashore Hall first served as a hospital in the early 1900s before the General Hospital’s opening in 1929 on the west side of campus.

The structure eventually went on to occupy several university departments and offices, including departments of psychology, journalism, and sociology, and computing and audio-visual services.

The space Seashore Hall’s razing left behind now has the opportunity to serve university and community needs.

“We have other city activities like our farmers market, which is kind of set in its location. We also have the Chauncey Swan park that’s situated,” Iowa City Assistant City Manager Ashley Monroe said. “We’re not looking to expand those necessarily, but if the university is opting to expand green space downtown and, and would like to provide that as a community asset, all the better.”

Monroe added that she hopes the green space offers the community more opportunities to gather effectively and provides an inclusive and safe space for its members.

“I think it’s a good idea because students could be outside and get some sun while studying or even being in class,” Able said. “It can be easy to get cooped up inside, so [the green space] could give students more space to do their studies outside and meet friends.”