Two current and two former DI staffers weigh in on the postponement and cancelation of staple U.S. sports events a little over a year ago. 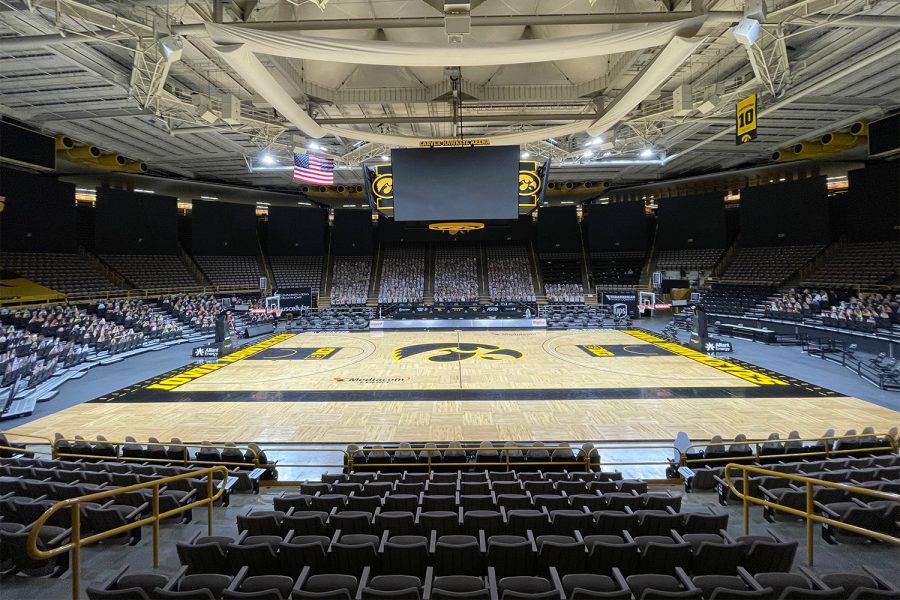 Carver-Hawkeye Arena is seen empty after a men’s basketball game on Dec. 22, 2020.

When sports shut down in March of 2020, The Daily Iowan staffers witnessed it first-hand.

Then-Sports Editor Robert Read and Pregame Editor Pete Ruden were in Indianapolis to cover the Big Ten Men’s Basketball Tournament before it was canceled. Austin Hanson and Kayli Reese, then the Assistant Sports Editor and Managing Editor, respectively, were both in the DI newsroom trying to make sense of what was happening.

Here’s what they recall from sports shutting down on March 12 of last year.

March Madness was taken a bit too literally last year.

I sat in the press area at the Rutgers Athletic Center shortly after the Iowa wrestling team had clinched the 2020 Big Ten title when my editor told me there were positive COVID-19 tests recorded in Johnson County.

I didn’t realize that three days later while sitting at a restaurant in Indianapolis that a cascade of news events would crash around our ears. The NBA would shut down, Tom Hanks would test positive for the virus, and the Big Ten Men’s Basketball Tournament I was in town to cover would be up in the air. I never been as glued to Twitter or been as fixated on the updates scrolling across the bottom ticker on ESPN.

The next morning, I sat in a hotel room with Pete Ruden and two other DI staffers as the tournament and all other sports around the country were called off. Pete lunging toward his laptop as the tournament was canceled remains a clear memory from that unforgettable day.

Pete sat shotgun as I drove back to Iowa City that day, trying to put into words what was happening to Hawkeye athletics.

One year later, I covered the 2021 Big Ten wrestling meet (which Iowa won again) in an empty venue in State College and made it back to Indianapolis to cover the conference’s men’s basketball tournament (which actually happened this time).

Sports certainly aren’t back to normal. But March Madness happening this year is a start.

It’s impossible to forget the scene when sports shut down.

A little squad of us Daily Iowan reporters were in a restaurant in downtown Indianapolis for the Big Ten Tournament when I received a Twitter notification from ESPN’s Adrian Wojnarowski.

The NBA had suspended its season.

Meanwhile, on the TVs around the restaurant, Nebraska head coach Fred Hoiberg was on the bench looking sicker than someone who started chugging Fireball at 6 a.m. before an 11 a.m. Iowa football game.

Even if Hoiberg didn’t have COVID-19 — he didn’t — every other team in the Big Ten Tournament had to use the same locker rooms and same facilities.

That’s when we figured there wouldn’t be a tournament.

The next morning, after watching SportsCenter all night and getting ready to head to the arena, it happened. The Big Ten canceled its conference tournament. Then, Duke opted out of the NCAA Tournament. Then, the NCAA canceled March Madness in full. And soon enough, sports were gone for the foreseeable future.

Seniors had played their last game. I had covered my last game for the *DI*. It was such an unexpected way for things to end.

But luckily, I got to see the Peyton Manning statue in front of Lucas Oil Stadium, so the trip wasn’t a total waste. And now, sports are back, and life is good.

After having to watch Czechoslovakian table tennis to get my fix last April, I will never take sports for granted.

I may have been helping manage things at the time, but I still believe Austin Hanson deserves a medal for what he did last year when the sports world came to a stop.

The first day sports-related events were canceled, things seemed to be announced in shifts — no fans at the NCAA tournament, no fans at any spring sports, etc. I have a fond memory of hearing Austin’s exclamation of frustration from across the room as another press release was issued, asking him if he needed any help from me, and him telling me in the world’s most polite voice that he had things covered.

When all spring sports and tournaments were canceled the next day, I told him to lock himself in an editing bay and write a project-length story. I stress-ate Buffalo Wild Wings while I waited for him to finish so I could copy edit the piece. While I like to think Austin and I were able to plan and get out the news quickly, I know we both breathed a sigh of relief when Robert Read came back to lead us.

I also remember feeling nervous about what lay ahead for the sports section; I didn’t know how sports-related stories could be written while sports weren’t being played. But I shouldn’t have worried about it for a second. I remain impressed with the amazing content the team continued to put out the rest of the semester, even under the hardest circumstances imaginable.

When the sports world stopped spinning a little over a year ago, my tenure at The Daily Iowan had barely begun, as I started at the DI just six months earlier as a sports reporter.

In January 2020, I was promoted from Sports Reporter to Assistant Sports Editor.

I had been trained up and had some time to acclimate to my new position, but nothing could’ve prepared me for my night in the newsroom on March 12, 2020.

Obviously, the Big Ten had already determined that its men’s basketball tournament would be held without fans.

With that context in the back of my mind, I began to work on the regular sports stories we were slated to run. When I arrived at a gymnastics preview we had budgeted, I noticed our reporter had yet to submit the story to me.

At that time, I received a message from the reporter that explained the gymnastics meet and other upcoming Big Ten events could be canceled or postponed because of COVID-19.

I tried to shrug off what I read, secretly hoping it had no weight to it.

I was wrong, my worst fears were realized just hours later. Emails began pouring into my inbox. Canceled. Postponed, they read.

With then-Sports Editor Robert Read and then-Pregame Editor Pete Ruden hundreds of miles away in Indianapolis, Indiana, for the eventually canceled Big Ten Tournament, I had no backup.

So, I began plugging away, writing a 1,000-word story on the biggest sports news in the last century in an hour’s time with less than 10 nights of experience on the sports desk under my belt.

I also give all the credit in the world to Kayli Reese. Not only did she help me get my thoughts straight, but she also edited the jumbled combination of letters and words I turned in.

While the night was horrifying at the time, it made me the writer and editor I am today. In a way, that adversity helped me prove to myself that I had the chops for the job — even if I might not have felt like I was entirely up to snuff at the time.