After they were denied a storybook finish to the 2019-20 season, the Hawkeyes hope to make history at the 2021 NCAA Championships. 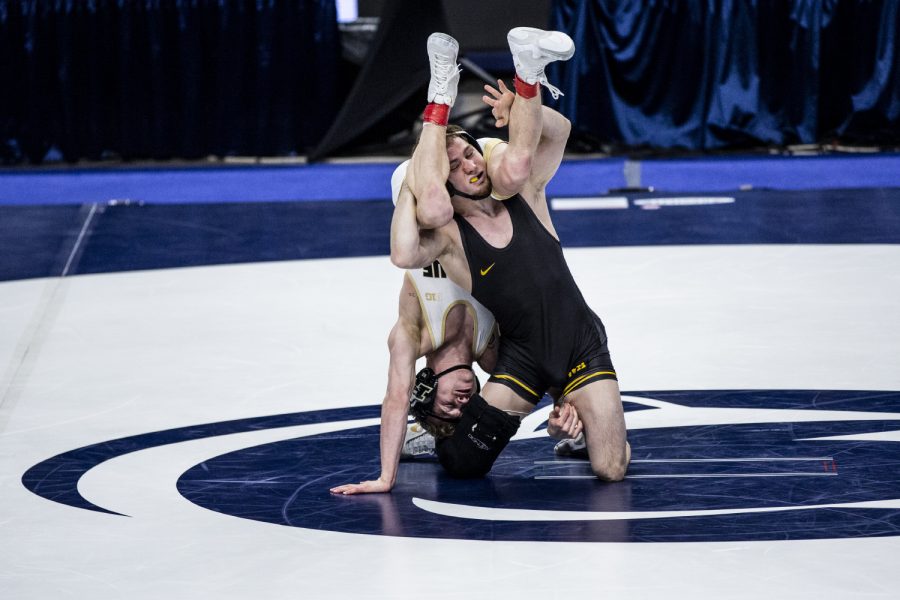 Iowa’s Spencer Lee attempts a takedown against Purdue’s Devin Schroder during the finals of the Big Ten Wrestling Tournament at the Bryce Jordan Center in State College, PA on Sunday, March 8, 2021. Lee won the match with a tech fall 21-3.

On March 12, 2020, Iowa wrestling was robbed of its chance at history.

The Hawkeyes were just five days removed from a first-place team finish at the 2020 Big Ten Championships in Piscataway, New Jersey, and preparing for a run at the NCAA Division I Wrestling Championship in Minneapolis, Minnesota.

Now-senior 157-pounder Kaleb Young earned an at-large bid for the 2020 NCAA Championships, ensuring all 10 wrestlers in Iowa’s primary rotation qualified for the event.

All 10 of Iowa’s starting wrestlers were seeded in the top 11 of their respective weight classes. Seed-based projections suggested the Hawkeyes could win the 2020 NCAA team title 50 points clear of any challengers.

Then, just seven days before the national tournament was set to begin, Marinelli’s wife Moriah walked into the wrestling room while the Hawkeyes were practicing with an email update, according to 174-pound senior Michael Kemerer.

The electronic letter was sent to notify Iowa that the 2020 NCAA Wrestling Championships were canceled because of COVID-19.

Iowa is now just one day away from the start of the 2021 NCAA Championships in St. Louis, Missouri, and once again, all 10 wrestlers in the Hawkeyes’ starting lineup have qualified for the national tournament.

“Yeah, it’s awesome,” Kemerer said at a Friday Zoom meeting with reporters. “I mean, thinking about the circumstances a year ago, obviously a lot has changed. We’re really happy that we can compete. I guess we’re thankful that we get this opportunity. Now, we gotta go and make the most of it. We can’t just squander, we gotta be ready to go.”

Had Iowa won a national championship in 2020, it would’ve been the program’s first since 2010. With history within their grasp, the Hawkeyes aim to cash in on the opportunity they have in front of them this year before it can get away or be taken from them like it was in 2019-20.

“I’m just glad the NCAA is doing everything they can to allow us to have an NCAA Championship,” Lee said. “Last year was very hard on every sport that didn’t get to compete, not just us. We’re ready to go, and we’re excited, and we’re looking forward to finally getting it done — getting ready to win a national title as a team and as individuals.”

Like Lee, Brands is just thankful that the Big Ten Conference and NCAA provided Iowa with an opportunity to compete safely this season with daily testing procedures, safety protocols, and return-to-competition guidelines.