A year after its best season, Iowa men’s tennis opts out of Hawkeye uniforms to protest the program’s end

The Iowa men’s tennis team has opted to compete in shirts with non-UI affiliated logos, colors, or images this season to protest one of the permanent pandemic-induced decisions from Iowa Athletics — cutting the tennis team. 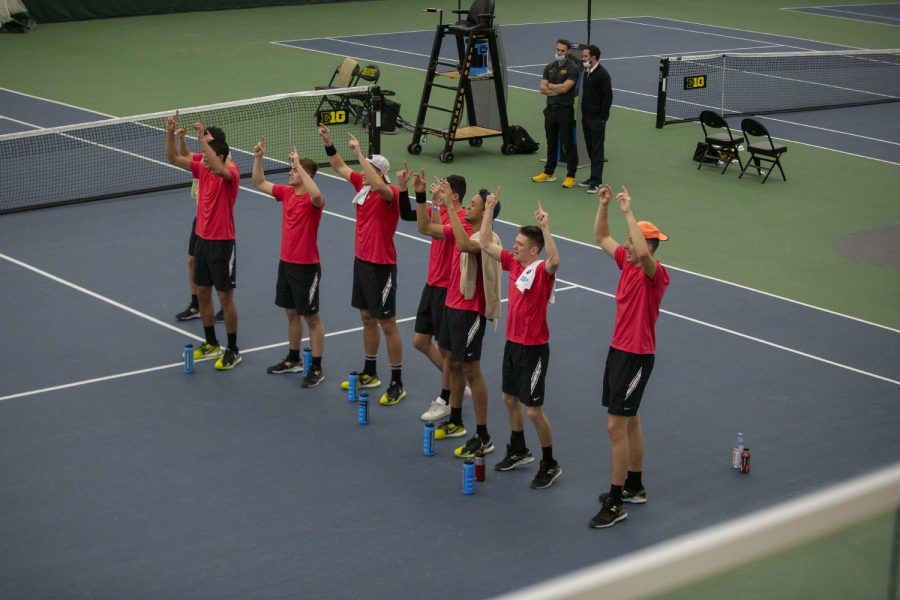 Iowa players chant and cheer on Will Davies during his singles match at the Iowa Men’s tennis meet v. Wisconsin in the Hawkeye Tennis and Recreation Complex on Friday, March. 12, 2021. The Hawkeyes defeated the Badgers 5-2.

A little over a year ago today, Iowa men’s tennis picked up one of the biggest wins in the program’s history and achieved its highest national ranking.

The Hawkeyes downed then-No. 16 Cornell at the Hawkeye Tennis and Recreation Complex on March 8, 2020. When the Intercollegiate Tennis Association’s rankings updated to account for the matchup, Iowa was ranked 20th in the nation.

Iowa appeared to be ascending to heights the program had never risen to, with a storybook NCAA Tournament appearance awaiting them at the end of the 2019-20 season.

The Hawkeyes, however, never saw the 2019-20 season all way through, as the Big Ten halted all conference athletic activities March 12, 2020, because of a rapidly spreading new virus.

Now, a little over a year later, Iowa men’s tennis is back on the court, albeit in a more somber tone and in different uniforms. Next year, the team won’t be there at all — the program becoming one of the permanent casualties of Iowa athletics’ COVID-19-wallopped finances.

In Iowa’s first home match of the 2020-21 season, the Indiana Hoosiers took the court dressed in their typical white-collared tops with “Indiana” in small red cursive lettering branded on the upper right-hand portion of the garment.

The Hawkeyes, however, did not take court in their traditional Black and Gold get-up. Nor were they even wearing white. The Hawkeyes took to the HTRC floor clad in red crew-neck shirts with a small, black Nike swoosh near the left shoulder.

The Hawkeyes have worn those same shirts — which the student-athletes paid for out-of-pocket — at every match since their home-opener on with Indiana Feb. 21.

Senior Kareem Allaf — the 39th-ranked singles player in the nation — said the team’s choice to wear non-Iowa shirts for this season’s matches stemmed from the University of Iowa’s decision to discontinue its men’s tennis program at the end of the 2020-21 academic year.

Head coach Ross Wilson declined to comment on the matter, instead deferring to his student-athletes.

On Aug. 21, Iowa athletics director Gary Barta announced that Iowa would cut men’s tennis, men’s gymnastics, and men’s and women’s swimming and diving at the end of the 2020-21 academic year because of financial losses from the pandemic that steamrolled Iowa Athletics.

As recently as Feb. 15, Barta has said UI Athletics is facing a $50-60 million deficit — even with the return of revenue sports that were paused during the early portion of the pandemic including football and men’s basketball.

The only Hawkeye sport that has been saved from the chopping block so far is women’s swimming and diving — which was reinstated by the UI after a months-long Title IX battle in court.

Allaf called the men’s tennis team’s decision to wear non-Iowa gear “our own statement,” meant to be a peaceful protest to the UI’s decision.

Before deciding on the solid red shirts for the first home match of the season and beyond, in the first two contests of the year at the ITA Kickoff event hosted by Ohio State, Iowa’s players wore solid black tops against Virginia and multicolored shirts versus Middle Tennessee State. Both choices were absent of any Hawkeye-specific markings.

All nine athletes agreed to ditch the Tigerhawk apparel and don their own shirts ahead of the Indiana match, Allaf said.

The decision to wear the red shirts was a way for the players — many of whom have played together for years — to show their commitment to their fellow teammates, sophomore Oliver Okonkwo said.

“I think [the decision to wear non-Iowa shirts] shows the unity and the bond we have between each other,” Okonkwo said in an interview with the DI.  “Right now, we are making the decision to keep going with it because it’s showing that we’re fighting for each other. We’re still out here battling, no matter what. It’s a way for us to identify with each other.”

Okonkwo said he believes his sport didn’t deserve to be cut, citing both on-court improvements, and the relatively small monetary commitment it takes to run the program.

“I mean, you look at it from a financial standpoint, we’re a pretty cheap team to run, compared to some of the other sports on campus,” Okonkwo said. “We’re a very diverse team. We have two Americans on the team; the rest of us come from different places. Just look at our results as well. We ended the season last year at No. 20 in the country. We had Kareem doing well in singles [ranked No. 51 nationally], me and Will were ranked No. 12 in the country. We were 12-2. We were having the best season Iowa men’s tennis has ever had. It’s just being stripped away from us.”

Okonkwo, a native of Berkshire, England, also referenced Wilson’s work to turn the team into a top contender nationally. Now, in his seventh season at the helm, Wilson has guided the Hawkeyes to four winning seasons, and almost certainly would’ve led his team to its first-ever NCAA Tournament appearance if last year’s season had been completed.

“I feel like it’s kind of unfair to stop the growth that we were showing,” Okonkwo said. “Ever since I got here, we improved every year. I’ve seen firsthand how much the team has grown. We were seriously doing some real damage, pulling some big upsets. Look at Ross, Ross has turned this program around completely, we’re a top-competing team in the country.”

Okonkwo also noted the team’s academic achievements. After the 2020 season, six of Iowa’s nine players were named Intercollegiate Tennis Association Scholar-Athletes — earning the distinction for a 3.5 or higher GPA at the end of the academic year.

Iowa men’s tennis was honored as an ITA All-Academic Team after registering a team grade-point average of 3.84 during the spring of 2020.

Other Hawkeye players expressed similar frustrations shortly after the UI’s decision to cut the team.

Barta and UI President Bruce Harreld wrote in the open letter announcing the cuts that the decision to cut men’s tennis, gymnastics, and swimming, specifically, was made after considering factors such as sponsorship at the NCAA Division I level, impact on gender equity and Title IX compliance, expense savings, history of the sport at Iowa, and engagement level.

Okonkwo said that he has seen support for the team’s decision to wear non-Iowa shirts on the court this year, both from people affiliated with the UI and other college tennis programs.

Although the UI has dealt the men’s tennis program the hardest blow imaginable, the Hawkeyes have won 13 of their last 14 matches in Iowa City dating back to last season.

Iowa will continue its farewell season in red Friday at noon as they take on Michigan at the HTRC.