Stage to studio: How the Englert and other Iowa City venues have adapted their spaces during COVID-19

Iowa City theaters are utilizing their spaces in unique ways when they can't welcome live audiences. From production studios, to classrooms, to operating without a space at all, theaters are still producing new content and supporting local artists in the community. 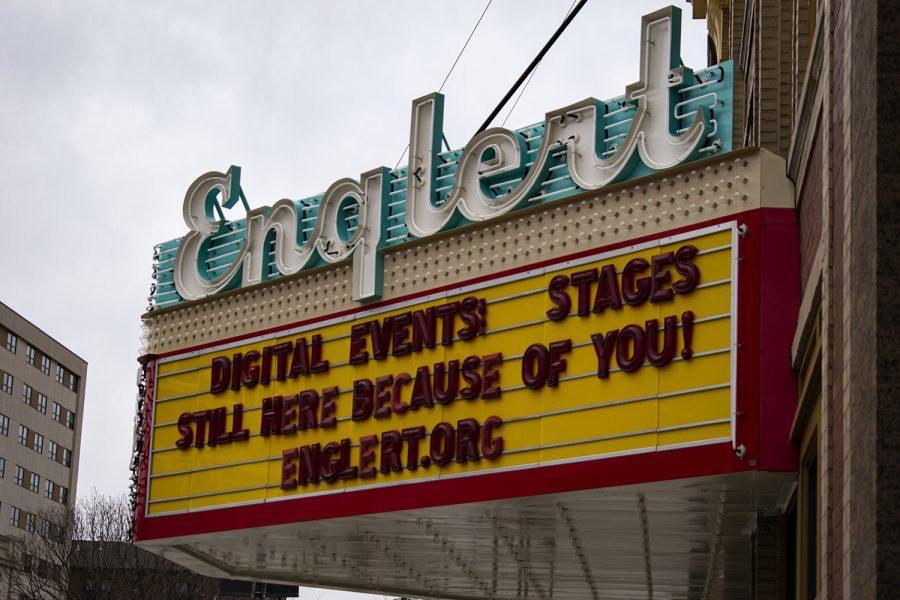 Seven-hundred and thirty seats sit empty in the Englert Theatre, as they have since last March. While seats remain vacant as the coronavirus pandemic continues to prevent audiences from gathering safely, however, the Englert’s stage is full of life, putting on virtual shows for a camera rather than a live audience.

Theaters in Iowa City may not be able to welcome patrons in-person, but they continue to utilize the space they occupy in a variety of different ways. While some are working with virtual programming until they can welcome audiences back into their spaces again, others have also used their stages to serve the Iowa City community and support local artists.

Englert Theatre has turned its stage into a fully operational production studio. The setup is complete with two to three cameras recording at any given time, in addition to soundboards, amplifiers, monitors, and stand lights. Englert Marketing Director John Schickedanz said the theater had to shift the way it viewed production when a live audience was no longer a factor.

“With this recorded production, it really is putting a lot more emphasis just on the stage itself, so we had to do some things to dress up the lighting and really make sure it was visually appealing,” Schickedanz said. “There’s a lot of equipment on the stage that the audience doesn’t necessarily get to see as we’re filming these digital productions.”

Schickedanz pointed out the unique opportunities presented to theater companies when the coronavirus pandemic closed physical spaces across the U.S. They took on new challenges, such as streaming, which would normally be too time-consuming to tackle during a regular season.

“There’s a lot of things that we had an interest in, but in a normal year, we’re not able to implement as many new programs as we have in the last year and a half, simply because we’re having to put on in-person events,” Schickendanz said. “So once those types of events were kind of shut off for us, it made it really conducive to be able to move into that territory in a much faster way.”

City Circle Theatre Company has also moved to filming performances for virtual audiences. The company continues to perform on its stage and use cameras to record for later access on a virtual platform.

Riverside Theatre has made some new changes to its physical presence, given a unique situation. The company used to occupy a theater on Gilbert Street but made a strategic decision to leave the space when its lease ended. The theater will eventually move into a new space in the Ped Mall.

Adam Knight, producing artistic director at Riverside, said the theater doesn’t need a physical space to function for now, as other, more important aspects of the organization’s mission needed to be preserved.

“A theater is more than a space. A theater is a mission, it’s the people who make that mission, and it’s the art that is created,” he said. “That doesn’t require a dedicated space to do.”

The lack of a physical space provided Riverside with a 15 to 20 percent reduction in overhead cost, allowing it to keep full-time staff employed, produce seven full productions, and provide paid positions for over 100 artists during the pandemic.

The University of Iowa Theatre Department has primarily moved to recorded Zoom productions. Some performances are recorded in-person on stage, but all are available for virtual viewing only.

Hancher Auditorium has helped the UI during the pandemic by turning its stages into classrooms for the Department of Dance and the School of Music. The building has hosted up to 12 classes per day, five days a week during the fall and spring semesters.

In addition to the classes being hosted on weekdays, Hancher has also partnered with the Department of Dance to help MFA students produce their thesis projects in the evenings and on the weekends. Executive Director of Hancher Chuck Swanson said Hancher enjoys the opportunity to help UI students.

“We’ve always been kind of proud of what one of the past university presidents, President Sandy Boyd, said a long time ago that Hancher was the largest classroom on campus,” Swanson said. “So, we’re actually living up to his quote, which I have been really proud of the fact that we’re making an opportunity for dance students and music students to really get a feel for that big stage.”