The Hawkeyes are the runners-up of the Big Ten Tournament, as Maryland won, 104-84. 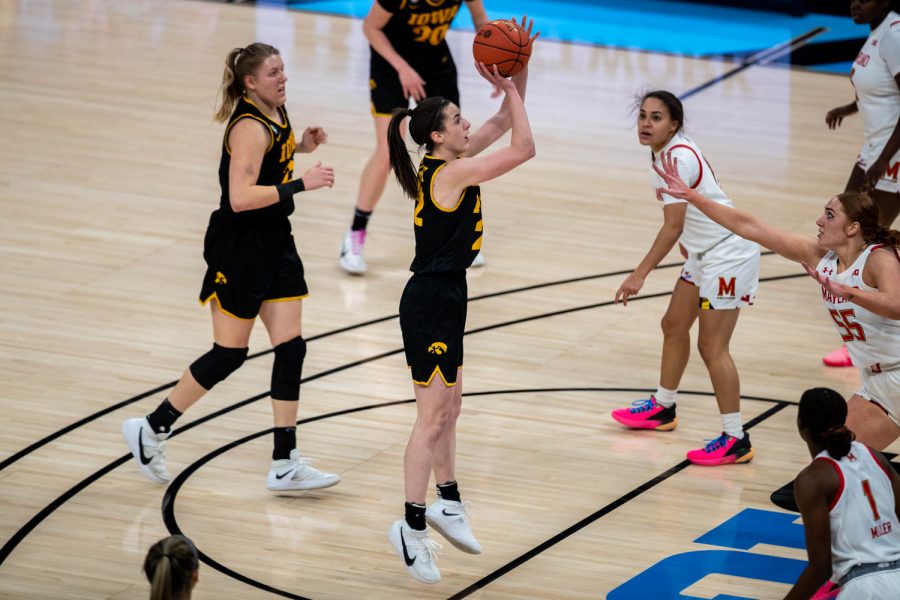 Iowa Guard Caitlin Clark (22) shoots the ball during the first half of the championship game of the Big Ten women’s basketball tournament. Iowa, ranked No. 6, took on No. 1 seeded Maryland in Indianapolis at the Bankers Life Fieldhouse Saturday afternoon.

Maryland struck first with a 3-point shot. and followed it up with a layup to take an early 5-0 lead. While junior center Monika Czinano converted a layup to make the score 5-2, the Terrapins scored another five straight points to take a 10-2 lead early in the first quarter.

The Terrapins continued their dominance through the quarter, and at the 4:18 timeout in the first quarter, Maryland led, 19-12.

After the timeout, the Hawkeyes made four consecutive points, but the Terrapins went on an 10-0 run to make the score 29-18 at the 1:08 timeout in the first quarter. Freshman Caitlin Clark made a layup after the timeout, but the points were voided as she was called for an offensive foul.

Sophomore guard Kate Martin attempted a buzzer-beater 3-point shot, but it bounced off the rim as Iowa went into the second quarter with an 11-point deficit, 18-29.

After sophomore Gabbie Marshall got a defensive foul at the 7:18 mark in the third quarter, she drew an offensive foul to give the ball back to Iowa, which McKenna Warnock converted into a layup. Iowa turned that into a 7-0 run, and at the 6:48 timeout in the second quarter, Iowa was down by eight, 30-38.

Freshman center Sharon Goodman quickly picked up two fouls within 30 seconds, which Maryland turned into four free-throw points to go back up by 12.

A shot clock violation by Iowa at the 3:27 mark in the second quarter turned the ball over to Maryland, but the Terrapins were not able to convert on a layup. On the Hawkeyes next possession, Czinano drew the foul on a layup, and completed the 3-point play to cut Iowa’s deficit to 46-33.

Senior Alexis Sevillian checked in for the first time all tournament with 2:06 left in the half, but got a foul before checking out again after 55 seconds on the court.

Iowa went 2:45 without a field goal at the end of the second quarter, but Czinano made a jumper at the buzzer to keep Iowa within 20 points.

At halftime, Maryland led, 55-37. The Terrapins heavily out rebounded Iowa in the first 20 minutes, grabbing 21 rebounds compared to Iowa’s 15. Maryland also totaled a staggering 13 offensive boards for 19 second-chance points in the first half.

Maryland went on another 10-o run at the end of the quarter, extending its lead to 24 points, 79-55, at the timeout with 29.4 seconds left in the quarter.

Clark drew a foul with seven seconds left in the third, tacking two more points for Iowa before the buzzer sounded. With 10 minutes left to play, Maryland led, 79-57.

At the beginning of the fourth quarter, Maryland intercepted a Warnock pass meant for Clark, and was able to turn convert the steal into a layup. Maryland’s smooth actions didn’t stop there, as it saved a ball from going out to lob a half-court pass for another layup in transition.

Alexis Sevillian made a 3-point shot at the buzzer, making Iowa’s deficit 20 points to end the tournament title game.

Maryland won the title, 104-84, to become the Big Ten champions for the second year in a row.

Junior forward Logan Cook checked in to the game at the 1:46 mark in the fourth quarter, marking the first time she has seen the court since she tested positive for COVID-19 on Feb. 25.

Per Big Ten protocols, Cook needed to be out for at least 17 days and complete health screenings before returning to the court. She missed Iowa’s final four games and the first three games of the Big Ten Tournament, and only became available for Saturday’s Big Ten championship game.

At the end of the game, Iowa started putting in their backups, with freshman center Sharon Goodman recording the first three bench points for the Hawkeyes with 1:32 left in the game.

Senior Zion Sanders, who has only seen 15 minutes of action all season, also recorded three points with 1:11 remaining, as she drew the foul on a layup.

Senior Alexis Sevillian made a buzzer-beater 3-point shot to end the game for her only points of the tournament.

Freshmen Lauren Jensen and Shateah Wetering also saw time on the court at the end of the game, but did not score.

With an 89 percent shooting percentage on Wednesday against Purdue, Czinano moved into second place in single-game field goal percentage at the Big Ten Tournament. On Saturday, Czinano tacked on another tournament record.

With 107 points through four games, Czinano broke the record for most points scored in a single tournament. The previous record was set by Northwestern’s Nia Coffey, who had 100 points in 2016.

The Terrapins grabbed a staggering 18 offensive rebounds compared to Iowa’s 9, and Maryland capitalized for 26 second-chance points through 40 minutes.

The Hawkeyes out rebounded Maryland defensively, 25-18, but overall, Maryland grabbed 36 rebounds to Iowa’s 34.