The Hawkeyes lost to the No. 7 team in the nation. 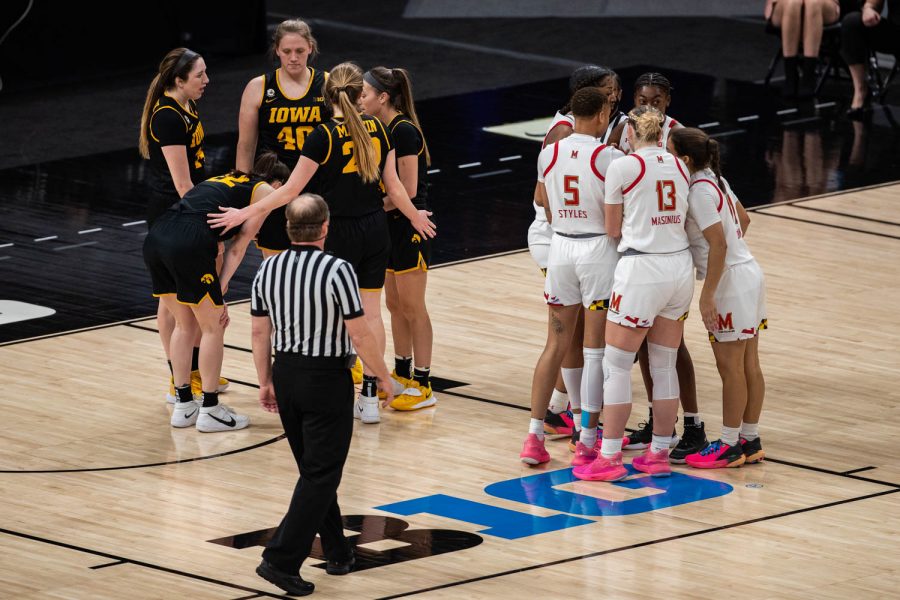 Both Iowa and Maryland's womens basketball teams are seen during the championship game of the Big Ten women’s basketball tournament. Iowa, ranked No. 6, took on No. 1 seeded Maryland in Indianapolis at the Bankers Life Fieldhouse Saturday afternoon. Maryland beat Iowa, 104-84, securing their spot as the 2021 Big Ten Champions. (Kate Heston/The Daily Iowan)

INDIANAPOLIS – Against all odds, the sixth-seeded Hawkeyes made it to the championship game of the Big Ten Tournament against top-seeded Maryland at Bankers Life Fieldhouse

The Hawkeyes started the tournament journey on Wednesday night, defeating 11th seeded Purdue to make it to the quarterfinals of the Big Ten Tournament. On Thursday, Iowa was one of three upsets in the quarterfinal round, taking down No. 3 seed Rutgers.

The semifinals were easy for the Hawkeyes, as they defeated seventh-seeded Michigan State — who took down No. 2 seed Indiana in the quarterfinals –– to make it to the championship game.

Just like that, for the second time in three years, Iowa was in the finals.

But Iowa couldn’t win it all against the Terrapins, settling for runners-up as the defending champion Terrapins took the title, 104-84.

Postgame, head coach Lisa Bluder had nothing but praise for the dominating Terrapins.

“Maryland is ranked seventh nationally and five in the NET [NCAA Evaluation Tool],” Bluder said. “They’re a terrific basketball team, and I can really see them getting to the Final Four. I hope they do, because I think it really bodes well for our conference.”

While Iowa had to play four games in four days, Maryland got the coveted tournament double-bye, and only had to play three games to get the championship.

Iowa was plagued by Maryland’s offensive rebounding, as the Terrapins grabbed 18 o-boards compared to Iowa’s nine. Off those, Maryland was able to score 26 second-chance points.

But it’s not all bad for Hawkeyes, who broke two tournament records throughout the week.

Although freshman point guard Caitlin Clark said she had a “lid on the rim” throughout the tournament, she found other ways to contribute — the Big Ten Freshman of the Year set the tournament record with 37 assists.

“I don’t think I can credit myself for that,” Czinano said. “I think our guards do a great job of finding me in positions that they know I’m good at scoring at. All those post slides that I was doing, we had some great assists — Caitlin broke the assist record, she has such good court vision, just finding me. And a lot of my buckets are layups, which are quote-on-quote the easiest shots.”

The Hawkeyes are projected to be a No. 5 seed at the NCAA Tournament, per ESPN bracketology analyst Charlie Creme. Iowa will officially find out its seed for the NCAAs on Monday at 6 p.m. on ESPN.