At halftime, the Spartans have a one-point lead over the Hawkeyes, 41-40. 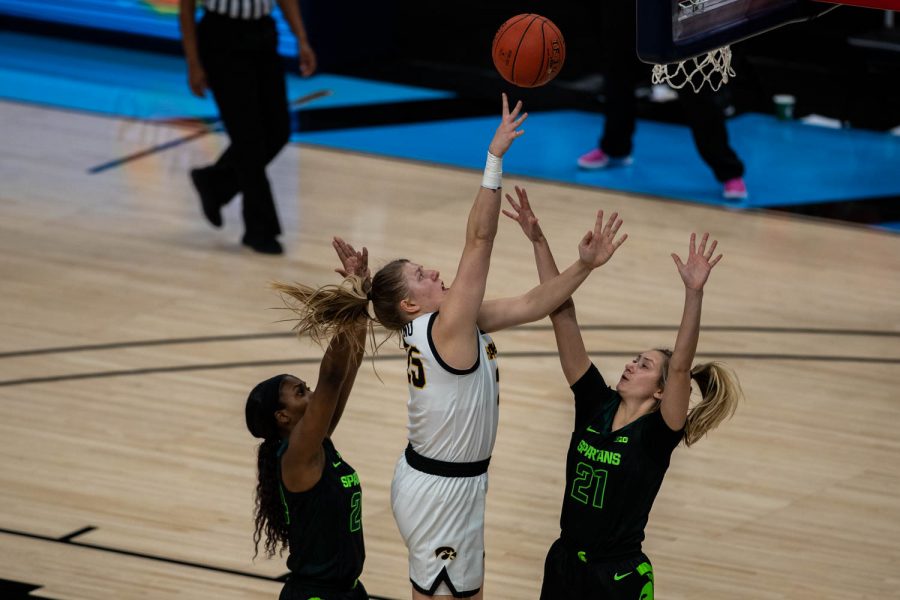 Iowa’s Monkia Czinano (25) takes a shot during a semifinal game of the Big Ten women’s basketball tournament. Iowa, ranked No. 6, took on No. 7 seeded Michigan State in Indianapolis at the Bankers Life Fieldhouse Friday afternoon.

INDIANAPOLIS – Iowa women’s basketball went into halftime of the Big Ten semifinals with a one point deficit to Michigan State, 41-40.

The Hawkeyes and Spartans have been exchanging the lead throughout the half, in a game that has featured 13 lead changes throughout just the first 20 minutes. The teams ended the first quarter tied at 24, but Michigan State edged out the Hawkeyes at the end of the second quarter to take the one-point lead.

Junior center Monika Czinano is the leading scorer for the Hawkeyes and the only player in double-digit scoring so far, tallying 13 points on 6-of-7 shooting from the field.

Michigan State’s Nia Clouden is the only player in double-digits in scoring for the Spartans, with 14 points and five rebounds.

The winner of this game will advance to the Big Ten championship game against No. 1 seeded Maryland tomorrow at 1 p.m. CST.

The game is being aired on FS2.