On Thursday, sixth-seeded Iowa upset third-seeded Rutgers, 73-62, to advance to the semifinals of the Big Ten Tournament. 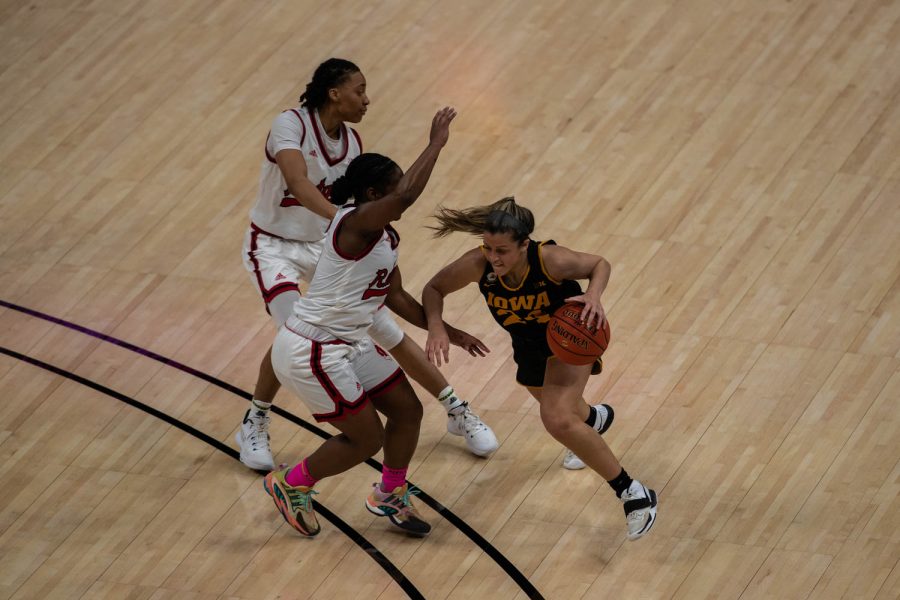 Iowa Guard Gabbie Marshall (24) charges towards the basket during a quarterfinal game of the Big 10 women’s basketball tournament. Iowa, ranked No. 6, took on No. 3 seeded Rutgers in Indianapolis at the Bankers Life Fieldhouse Thursday night. (Kate Heston/The Daily iowan

INDIANAPOLIS — No team was safe in Bankers Life Fieldhouse on Thursday.

The only top-four seed that made it to Friday’s semifinals is No. 1 seed Maryland.

“This conference is so amazing,” Iowa head coach Lisa Bluder said. “This is such a difficult conference, and we’ve been beating up on each other all year long.”

The troubles and tribulations of a difficult regular season are now firmly behind the Hawkeyes, and they believe their 15-8 overall record no longer matters.

“Especially in March, anything can happen,” sophomore guard Gabbie Marshall said. “We just go into this Big Ten tourney with a clean slate. Like, the records in the regular season don’t really matter now. So, we’re just going to give them our all. And every team is thinking the same way, so we know that we have to have confidence and be mentally mission-focused.”

The Hawkeyes thoroughly accomplished their mission Thursday night. After Iowa jumped out to a 20-point lead over Rutgers during the second quarter, the Hawkeyes never relented.

The narrowest Iowa’s lead was between the end of the second quarter and the final buzzer was eight.

Iowa was almost perfectly in sync against Rutgers, as the Hawkeyes even lobbed some half-court passes with ease:

The Hawkeyes’ starting lineup consists of only one upperclassman — junior center Monika Czinano. At the beginning of the season, Iowa had issues getting its inexperienced team synchronized. Now, with a full season under their belts, the Hawkeyes have found their rhythm.

According to Bluder, the chaotic third day of Big Ten Tournament action that Iowa was part of Thursday speaks to the conference’s depth and quality — which could give foes from other leagues fits in the NCAA Tournament.

“I just think it’s going to be really fun to watch the NCAA Tournament,” Bluder said. “I mean, I’m hoping we have eight teams in, for sure we have seven, but I hope we have eight. And how far and how well we’re going to do in the postseason tournament, I think the Big Ten is going to make a lot of noise in postseason play.”

The first semifinal game of the Big Ten Tournament, featuring No. 1 seed Maryland and No. 5 seed Northwestern, tips off at 1 p.m. The Hawkeyes and Spartans are slated to play 25 minutes after the conclusion of that game — approximately 3:30 p.m.

Iowa now has less than 24 hours to prepare for Michigan State, but the Hawkeyes came to Indianapolis ready for any team they needed to take on in the tournament.

“We were ready for both [Indiana and Michigan State],” Bluder said. “We have a great scout team. My coaches have them broken up, they do an amazing job. We will get back to the hotel tonight and have the Michigan [State] scout printed off and ready to go.”