Meeting your best friends in college is one thing, but working together, years after graduation, is another. 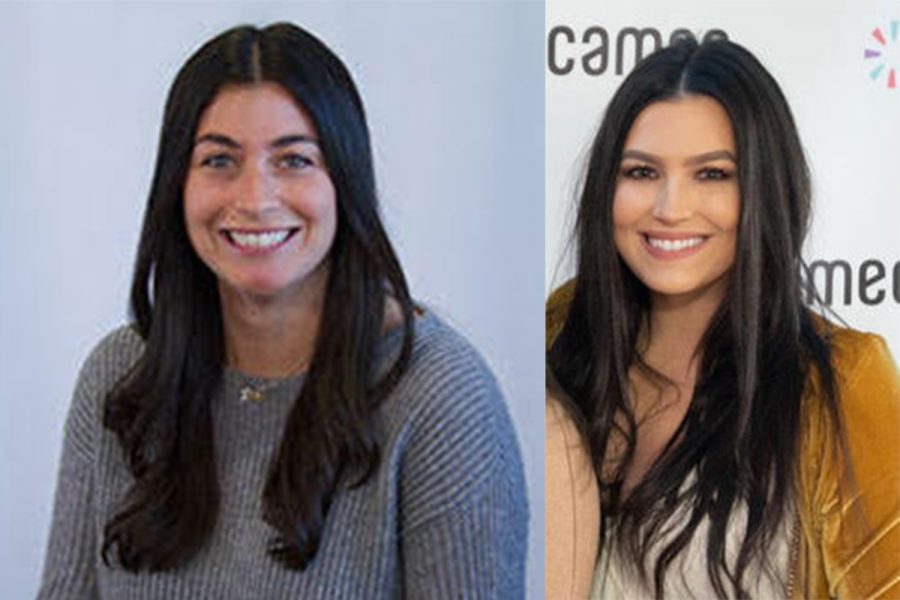 Two University of Iowa alum who were best friends in undergraduate are now coworkers at the same entertainment company, Cameo, and attest their success to connections made through the university.

Kayla Duffy and Lindsey Cook said they met on one of the first move-in days of their freshman year at the UI. Both living in Mayflower residence hall and going through sorority recruitment together, they have continued to be the best of friends since graduating in 2013.

“I got my first job out of college at NBC Universal because a girl in my sorority’s sister worked there,” Duffy said. “I ended up getting a girl a job there who was on my club volleyball team with me.”

Cook was also part of the Greek life community as a member of the Delta Delta Delta Sorority on campus. Cook said she tried to start her own club on entertainment in sports with one of her friends to have a space for people who were interested in entertainment, but it did not take off.

“College was a great experience for me,” Cook said. “I felt I tried to really get as much out of it as I could.”

As someone who took advantage of office hours and extra opportunities, Cook said she was always trying to do the best she could and make connections, just like Duffy.

“This is something that has always been a part of me, but I really just started to network during college,” Cook said. “As soon as I realized what I wanted to do and go that entertainment route, I would ask anyone and everyone to help and to put me in touch with people.”

After graduating college, Cook said she got the opportunity to move to Los Angeles without knowing anyone and with no current job. But Cook and Duffy still stayed in touch.

“We were both doing some of the similar things working with talent,” Duffy said. “I was at NBC Universal and she was always looking for the next step.”

When Cook returned from Los Angeles back to Chicago, she said she became tired of her job as a recruiter for a firm in Chicago. She saw this opportunity pop up at Cameo, she said, and thought it was too good to be true.

Cameo’s company mission is to create the most personalized and authentic fan experiences on earth. On the Cameo app, people can pay for a personalized message from hundreds of their favorite celebrities, athletes and more.

Cook said she then encouraged Duffy to interview for Cameo.

“Something we always say at Cameo is that this is a great place to work,” Cook said. “If you really love your job, why would you not want your best friends to come work here?”

At the time, Duffy said she was nervous to leave NBC, but Cameo and the members of the company sold her.

“I went into the interview and I just fell in love with the people and the company,” Duffy said. “I just really thought this was going to be something one day and if I am not a part of it I’m going to regret it.”

When Cook found out that Duffy also got a job, she said she was beyond excited and knew how much fun it would be working with Duffy.

“It was just so fun to be able to sit next to her every single day and do what we love,” Cook said.

Currently, both women are working remotely through Cameo as Talent Relation Managers for celebrities that are working with the app to provide messages.

As soon as new celebrities or “talents” come onto the platform, Cook said both her and Duffy work together to make sure the talents are set up for success and are getting what they want out of Cameo.

“I wake up every day for work and my main job is to text celebrities,” Duffy said. “It is pretty cool.”

Some notable names Duffy said she has worked with are Jim O’Hare from “Parks and Recreation,” Bethany Frankel from “Real Housewives,” Steve Harvey, and even JoJo Siwa.

She said every person has been a joy to work with.

“One of the most powerful things I feel like is when we get reaction videos from fans,” Duffy said. “People laugh, people cry, people fall to the ground. The impact I do not think people realize this one-minute video makes is incredible … all around it is spreading joy.”

Director of Alumni Relations for the UI Tippie College of Business Ashley Durham said it is amazing that both women are working together now at Cameo and it speaks to the bond they have created over the years.

“I am sure they are using the skills they learned at Tippie to be successful employees together now,” Durham said.

She added that it is important for people to expand their network of people throughout college, just like both Duffy and Cook did throughout their college years.

“The opportunities Tippie provides to our students to let them work on their networking skills and build those connections proves to be invaluable time and time again,” Durham said. “The Tippie Alumni community is strong and always willing to help a fellow Hawkeye graduate.”

Duffy said because she had one of her best friends and fellow Hawkeye to support her, it made the difficult transition from NBC to Cameo much easier.

“It was just an easier transition from job to job, it was nice having someone that I knew going into my new job,” Duffy said. “Just having her there when I first joined was amazing. I still talk to Lindsey, we will call each other when we have a meeting with another girl we work with once a week, just to chat and catch up.”