Last March 12, the conference tournament was canceled before the Hawkeyes even took the court. The team is hoping for a calmer March Madness this time around. 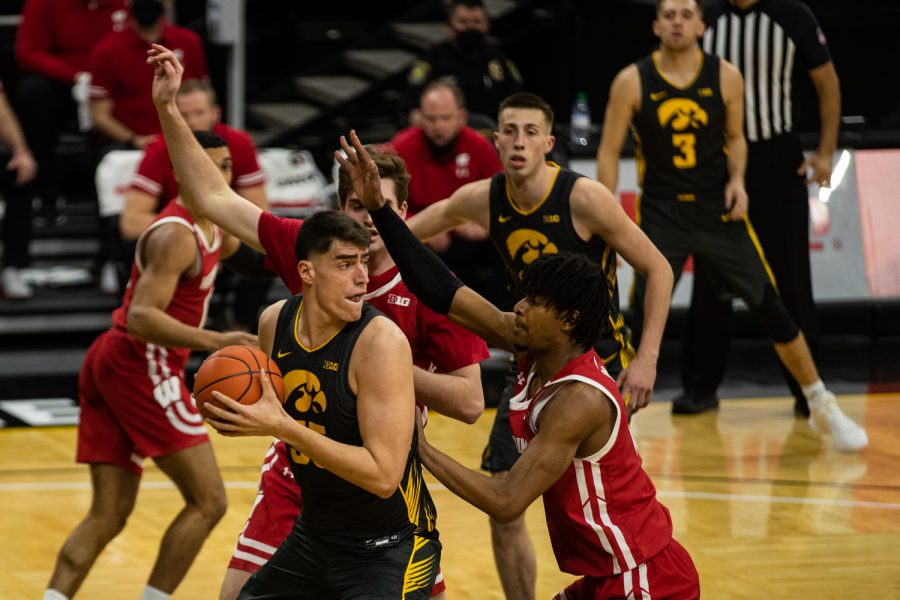 Iowa center Luka Garza looks to pass during a men's basketball game between Iowa and Wisconsin at Carver-Hawkeye Arena on Sunday, March 7, 2021. The Hawkeyes, celebrating senior day, defeated the Badgers, 77-73.

The Iowa men’s basketball team was scheduled to play Minnesota in the second round of the 2020 Big Ten Men’s Basketball Tournament in Indianapolis on March 12 a year ago.

“When we got there, it was all systems go,” Iowa coach Fran McCaffery said. “We checked into our hotel like we’ve always done. We had meetings, meal, then we all went over to see the game, the winner of which we were going to play.”

But as of March 11, the tournament was in doubt.

That night, the NBA suspended its season after Utah Jazz center Rudy Gobert tested positive for COVID-19. In Indianapolis, Nebraska coach Fred Hoiberg was visibly ill on the sideline during the first day of the Big Ten Tournament (although it was later determined he did not contract COVID-19).

Iowa’s season was over. The college careers of the team’s seniors were over. The path ahead was uncertain as the pandemic began to dominate everyday life.

“It was a crazy experience,” center Luka Garza said. “I felt bad for all our seniors. We were going to be in the [NCAA] tournament, and they missed out on that opportunity. I think it just provided our whole team with a lot of motivation going into this year, to make sure that once we get back to Indy, we’re going to make it count.”

Now, one year after sports shut down across the U.S., the Hawkeyes are back in Indianapolis.

And back in the postseason.

The game is scheduled to tip off at 8 p.m. (CT) and will air on the Big Ten Network.

For the first time this season, the Hawkeyes will play in front of fans. The Big Ten is allowing 8,000 spectators to attend the Big Ten Tournament. Lucas Oil’s capacity is 70,000 seats.

The Badgers defeated Penn State Thursday night to set up a third meeting with the Hawkeyes this season. Iowa won both the previous two meetings, including Sunday’s regular-season finale at Carver-Hawkeye Arena.

Whether Wieskamp can go or not, an Iowa win would likely set up a rematch with rival Illinois in the semifinals on Saturday.

The NCAA Tournament is also taking place entirely in Indiana this year in an effort to limit travel during the still-present pandemic.

So, the Hawkeyes, projected as a two-seed in the NCAA Tournament by ESPN bracketology guru Joe Lunardi, will remain in Indiana until their season is over. The team will attend classes virtually while away and practice wherever available, including a local YMCA.

A potential month-long trip meant there was a lot of packing for Iowa players to do. The national championship isn’t until April 5, so a successful postseason run would mean Hawkeye players, who arrived in Indianapolis on Thursday, would be away from Iowa City for just under a month.

Which would be fine by them.