The Hawkeyes will play each opponent twice this weekend at U.S. Bank Stadium in Minneapolis. 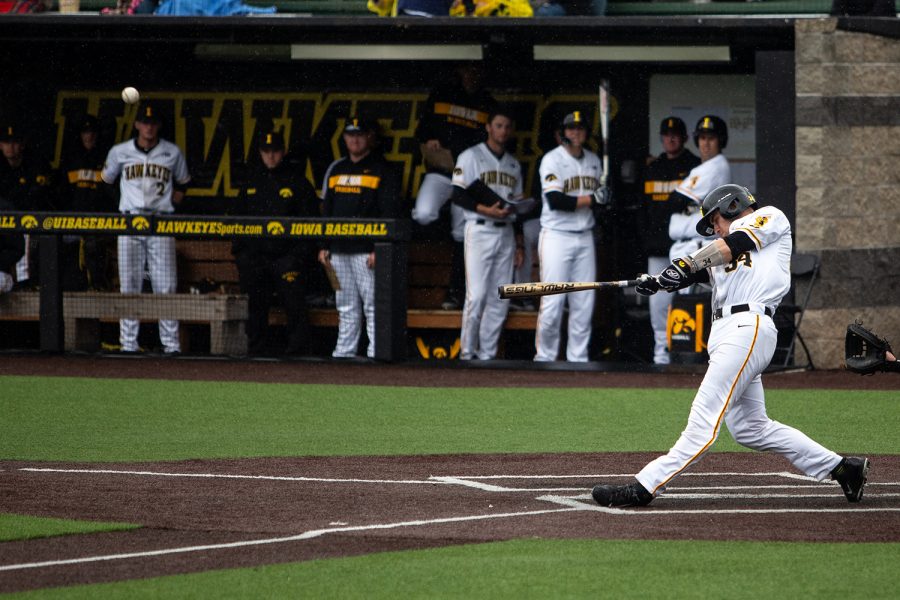 Iowa catcher Austin Martin hits the ball during the baseball game against the Spartans at Duane Banks Field on Sunday, May 12, 2019. The Hawkeyes were defeated by the Spartans 5-7.

Senior Austin Martin was one of two Iowa baseball players to bat over .300 across 10 or more plate appearances in the Hawkeye’s season-opening, four-game series against Michigan in Round Rock, Texas, last weekend.

The catcher from Altoona, Iowa, went 5-of-14 at the plate against the Wolverines’ pitching staff, and the college baseball world was watching.

Martin was named to the Buster Posey National Collegiate Catcher of the Year Watch List Tuesday by the Greater Wichita Area Sports Commission. The award is given annually to the nation’s top collegiate catcher.

Matin is one of four Big Ten catchers and one of 69 nationally named to the initial watch list.

He was named to the same list a year ago after hitting .445 in 2019 and recording just three errors and eight passed balls as a sophomore.

Martin has been a regular behind the dish defensively for Iowa since he was a sophomore, as he played in every game in 2019 and 13 of the Hawkeyes’ 15 contests in 2020.

In his only full season of action, Martin collected 10 doubles, drove in 30 runs, and hit two home runs.

Against Michigan last week, two of his hits were doubles.

Trenton Wallace, who will be getting signals from Martin as he makes his second start of the year on the mound this afternoon, will be looking to build on his first game as the ace of the Hawkeye staff.

On opening day, Wallace gave up just three hits and two runs over five innings pitched. He also walked four batters. When Wallace was pulled, Iowa was down 2-1, and although the Hawkeyes would rally to tie it at two in the seventh inning, Wolverine runs in both the eighth and ninth innings sealed a 4-2 defeat for Iowa.

Against Ohio State today, Wallace will have his work cut out for him, as the Buckeyes’ starting lineup will likely feature four hitters that posted averages above .300 in Ohio State’s first series of the season.

Buckeye freshman outfielder Kade Kern has burst onto the scene this season, hitting .471 across four starts versus Illinois. Kern tallied five RBIs against the Fighting Illini.

In his first college game — a 13-inning, 6-3 win for Ohio State — Kern went 5-of-6 with a triple, three singles, and a 13th-inning RBI double that helped the Buckeyes score their last three runs of the game.

Kern is the first Buckeye to record five hits in a single game since 2018.

In 2019, Iowa took two of three games against Ohio State in Columbus.

Following today’s matchup, Iowa will face Nebraska and Ohio State in a double-header tomorrow, and then close out the road trip with another clash with the Cornhuskers on Sunday.

Nebraska, like Ohio State, began the season 3-1, outscoring the Purdue Boilermakers 21-2 across its three victories.