Hawkeye tennis teams look to bounce back this weekend

After posting a combined 1-3 record last weekend, the Hawkeye men’s and women’s tennis teams will play four matches this week. 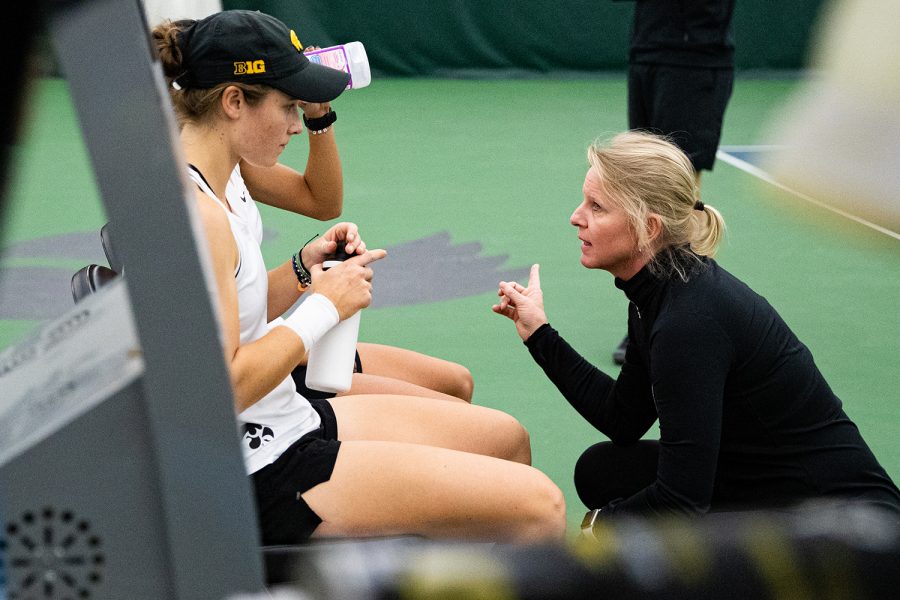 Iowa head coach Sasha Schmid talks to her team during a women's tennis match between Iowa and Colorado at the HTRC on Sunday, Feb. 16, 2020.

Iowa men’s and women’s tennis are both looking to bounce back this weekend after four difficult outings last week.

The No. 38 men’s team will return home to take on Wisconsin and No. 48 Minnesota, while the Hawkeye women hit the road to compete against Illinois and No. 7 Northwestern.

The Wisconsin men are 1-4 in Big Ten Conference play this year, with their only win coming against a 2-4 Michigan State team. The Badgers have struggled across the board since the beginning of league play with senior Jesper Freimuth sporting the only winning record on the team.

Like his team, Iowa’s Kareem Allaf will look to mend some of his wounds this weekend at the Hawkeye Tennis and Recreation Complex. The nation’s 39th-ranked player suffered his first two losses of the year against Illinois and Northwestern last week.

Allaf — a sixth-year student— is currently five wins shy of tying the program record for combined singles and doubles wins.

As it has been all season, Iowa’s performance in doubles will likely determine the level of success it has. So far, Iowa has won every single match that’s seen them pick up the doubles point.

The No. 17 pair of Will Davies and Oliver Okonkwo is still undefeated for Iowa, and now has a win against a ranked pair duo following their victory over Northwestern’s No. 57 Simen Bratholm-Nick Brookes dyad.

If the Hawkeyes can pick up the doubles point and down No. 48 Minnesota, Iowa would officially add its first win over a ranked team to its résumé

The Gophers have struggled so far this season, winning just two matches. Three of their first five opponents, however, are ranked in the ITA top 30.

Sebastian Vile leads Minnesota in singles wins this year. Vile anchors the lower half of the lineup and will be tough for the Hawkeyes to compete with, as head coach Ross Wilson has struggled to find consistency at the No. 5 spot in his lineup this season.

Iowa won its last meeting with Minnesota in March 2019.

After a tough loss against No. 10 Ohio State last weekend, the Iowa women’s tennis team is hoping to replicate its performance in its first matchup against Illinois this season.

“The loss to Northwestern and the loss to Ohio State, that’s definitely the next place to grow,” head coach Sasha Schmid said. “You hope that the more chances you get at these opportunities that you learn, and you grow.”

The Hawkeyes blew by Illinois in their season-opener this season, 4-2.

After a four-match losing streak to start the season, Illinois has won two of its last three.

Iowa and Illinois are contrasting teams as the Hawkeyes’ lineup has been very top-heavy while the Fighting Illini’s top players have struggled this season.

No. 97 Alexa Noel and senior Elise van Heuvelen Treadwell have combined for a 15-1 singles record in conference.

Iowa will have another shot at a top ten opponent when they travel to Evanston, Illinois, to take on No. 7 Northwestern Sunday.

The Hawkeyes were unsuccessful earlier this season against the Wildcats with Noel grabbing the only point of the match for Iowa.

Northwestern is led by No. 57 Julie Byrne, and the No. 47 Byrne-Hannah McColgan doubles pair.

“The [players] have to have a comfort level out there too,” Schmid said. “They have got to understand that they can play their way into these and some of that comes just with more and more experience.”