The state of Iowa could lose millions of dollars without its first-in-the-nation caucuses, according to FEC campaign spending data

January 2020 alone brought in $7 million for the state leading up to caucus night on Feb. 3. Though Iowa politicos say overall benefit of the quadrennial caucuses to the state is questionable at best. 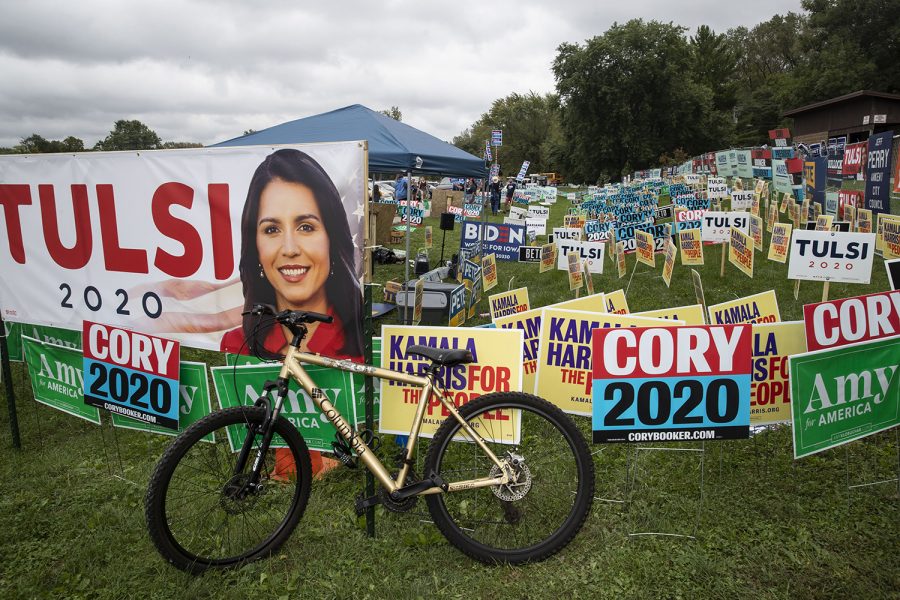 Iowa businesses and media outlets could miss out on a significant amount of money in the months leading up to caucus night if the state were to lose its first-in-the-nation status, with the Federal Election Commission reporting that campaign spending reached $7,210,242 in the state over the month of January 2020 alone.

That number is about 14.7 percent of the state’s entire gross domestic product in that same month, according to the U.S. Bureau of Economic Analysis.

Jessica Dunker, President and CEO of the Iowa Restaurant Association said for Iowa’s restaurants, especially those in large urban parts of the state like Des Moines, the Iowa caucuses are an important opportunity for restaurants to make up for slow business over the winter months.

She said people may not realize that restaurants sometimes rely heavily on increased income on specific dates like holidays, big sporting events, and in this case, the weeks or days leading up to caucus night to financially sustain the business during periods where the restaurant is less profitable.

“From the standpoint of the restaurant industry, the caucuses are a tourism drawl that bring volunteers from all over the country,” Dunker said. “They all stayed somewhere and they all ate and drank somewhere and we were happy to take care of them.”

Dunker said though it’s unlikely the economic impact would be so negative as to put any restaurants out of business, Iowa losing its first-in-the-nation status would eat into significant income for the industry.

Advertising analytics firm Ad Impact released its Political Cycle in Review at the end of last year detailing the total amount of money spent over the course of 2019 and 2020 on political advertisements as well as a geographic breakdown of which American cities campaigns spent the most on for TV and broadcasting ads.

The Des Moines-Ames area received $105 million from campaigns for broadcast and cable advertisements, according to the report, which surpassed the amount Chicago received by $1 million.

That puts Iowa in a similar ballpark as Dallas, Boston, and Orlando, which all have spending in the low $100 millions. Broadcasting stations in Phoenix and Los Angeles are among the highest paid, according to the report, at $282 million and $265 million respectively.

The report also breaks down campaign spending on ads between political parties in some of the more contested states. In Iowa, Democratic candidates and Democratically-aligned interest groups spent a total of $9 million on TV ads, while their Republican counterparts spent a total of $19 million.

Iowa’s first-in-the-nation status has been questioned before, especially following last year’s execution which left caucus results hanging in the balance for days following the event. Other critics say that Iowa’s lack of diversity should disqualify it from starting the presidential-nominating process.

Resulting in part from the transition to a new phone application to count caucus results, the Iowa Democratic Party had issues announcing a winner until several days following the caucuses, according to NPR.

The Iowa Republican Party didn’t run into the same issue with its caucuses.

David Swenson, a research scientist in the Department of Economics at Iowa State University, published a study in April 2008 following that year’s caucuses, in which he argued that the event is more important in terms of exposure on the national level than it is for long-lasting economic stimulation in Iowa.

Candidates make it a priority early in their campaigns to make frequent stops across Iowa hoping to perform well in the nation’s first round of presidential-nominating caucuses, bringing with them campaign and media staffers from across the country. As previously reported by The Daily Iowan, Democrat John Delaney made a total of 269 stops in the state, with Democrats Amy Klobuchar and Pete Buttigieg slightly behind at 182 stops.

Swenson referred to data from the FEC for his report, looking at campaign spending in Iowa on items such as lodging, rental cars, and food within the state in the second half of 2007 leading up to the caucuses in 2008.

RELATED: By the numbers: The figures that defined the Iowa caucuses

He states in the report that a gap existed then between perceived spending in Iowa compared to actual spending, and that Iowa received only 4.4 percent of all campaign spending in the latter half of 2007 from leading candidate campaigns.

“There is a discernible, although only modest boost to the state’s overall economic activity for a time,” Swenson said in the report. “Nearly $7.34 million in labor incomes to 229 jobs are substantial by any measure, but one must remember that this is a quadrennial event [presidential caucuses]: the annualized values would be much lower when divided by four.”

Swenson said in an interview this month with the DI that most of the spending around the time of the caucuses occurs in the Des Moines metro area, and although Iowa’s capital city most likely gets a short-term economic boost, the activity replaces spending that would have been happening regardless – just not to the same extent.

Doug Nuemann, the executive director of the Cedar Rapids Economic Alliance, said the economic impact on local TV stations, radio stations, and newspapers is significant, and that the Iowa caucuses give more exposure to industries specific to Midwest states such as ethanol, wind energy and pork exports.

“All these things that are important to Iowa’s economy have a better chance at being a part of the national discussion because politicians come to Iowa to hear our story, ” Neumann said. “They make promises during the Iowa caucuses that they follow through with when they are in higher elected offices. It’s more indirect than just the spending perhaps an economist is looking at, but it is a huge economic impact in terms of our ability to shape public policy.”

Neumann referenced the Cedar Rapids flood of 2008 specifically and said he thought the Iowa caucuses and the exposure the state received was likely a significant part of why the city was able to get the federal assistance in city clean-up.

Barack Obama later declared following a similar flood in 2016 that 19 counties in Iowa would be eligible for federal relief to help with damages caused by the disaster.

In that same year, Donald Trump campaigned in Iowa promising to implement policies advocating for farmers, such as including an exemption to the federal estate tax within 2017’s Tax Cuts and Jobs Act.

David Yepsen, host of Iowa Press and former Des Moines Register politics columnist, said the financial benefits of the Iowa caucuses are overstated and don’t contribute as much to the state’s economic health compared with its annual GDP.

“There are a few winners in restaurants and hotels,” Yepsen said. “You look at the total gross state product, and I don’t know how many billion dollars it is now, but the amount of money spent on additional hotels and restaurants in the months of January and February is pretty insignificant.”

The total gross state product for 2020 was $677,303 million according to the Bureau of Economic Analysis.

Yepsen said some of the attention Iowa gets in the caucuses is not beneficial.

“Does it do Iowa any good to have network reporters coming out and finding people who have no teeth and asking them to talk about American politics, I don’t think so,” Yepsen said. “I think there’s a lot of stereotyping that goes on in Iowa – the hayseed, bib overalls, seedcord cap, and Midwestern drawl. That’s not the modern day Republican Party. So yeah, we get a lot of publicity but not all that is good.”

Greg Edwards, the president of marketing organization Catch Des Moines, said the Iowa caucuses are huge for the state in both exposure and economic impact, citing an estimate he gave to the DI last year in which the organization anticipated the caucuses would bring in $11.3 million during the week leading up to caucus day.

He said the organization used an internal economic impact calculator to reach its estimate, but didn’t provide exact numbers.

Edwards said keeping the first-in-the-nation caucuses in Iowa is important.

“You know, when you look at the Iowa caucuses it’s not just that one day in February when it occurs,” Edwards said. “You look at the overall impact…there are times when there were other big events going on at least in Des Moines and the candidates would show up and obviously whenever they showed up they bring an entourage of their own staff and supporters and of course news media as well, so the thing really goes on for a couple of years.”