As the youngest team in the conference, Iowa has turned to its juniors and underclassmen for leadership. 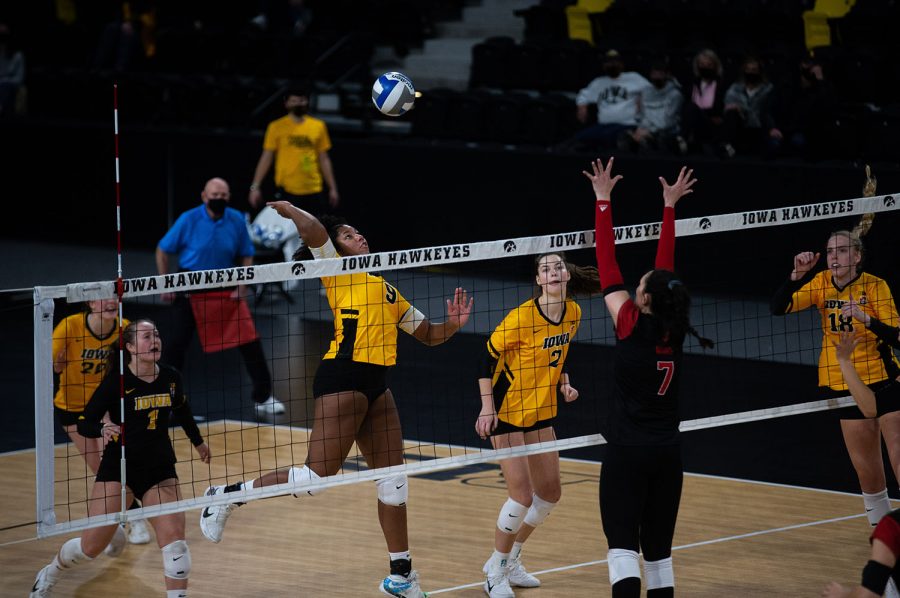 Iowa Middle Blocker Amiya Jones prepares to spike the ball during a women's volleyball match between Iowa and Rutgers at Xtream Arena on Saturday, Feb. 20, 2021. The Scarlet Knights defeated the Hawkeyes 3 sets to 2.

Iowa volleyball is the only team in the Big Ten Conference with no seniors on its roster this season. Uncoincidentally, Iowa is also the youngest squad in the league — boasting the fewest upperclassmen of any team.

So, the Hawkeyes have had to turn to their juniors and underclassmen for leadership.

For the last three seasons, now-senior Brie Orr has been Iowa volleyball’s primary leader. Orr, however, opted out of the 2021 season, leaving a leadership gap for the Hawkeyes to fill.

“[The seniors’] experience says enough for itself, especially with Brie being a three-year starting setter,” junior outside hitter Courtney Buzzerio said. “That was probably the biggest shift of leadership that more people had to take on than just her.”

Orr’s fellow seniors that also didn’t return this season, Halle Johnston and Griere Hughes, led more with their play on the court, rather than with their voices off it.

Hughes led the Hawkeyes in kills last season and Johnston finished with 300 more digs than any other player on the team.

So far, sophomore Joslyn Boyer has done a good job masking the void Johnston’s absence left the Hawkeyes, registering the seventh-most digs in the Big Ten.

Iowa has replaced Hughes’ production by-committee, as Buzzerio, freshman Audrey Black, and sophomore Edina Schmidt have all surpassed the 100-kill threshold this season.

“[The seniors’] roles have been evenly distributed between multiple players,” Buzzerio said. “I don’t think it’s solely on three new people. I think we have taken their spots and kind of split it between people, and I think we have handled it well and found a nice groove with who we have right now.”

Distributing leadership was in the cards for the Hawkeyes before the 2020-21 season even began, as the team decided to split up the roster into three leadership groups, rather than choosing team captains.

The three groups — The Rangers, Seal Team, and Delta Force — were filled based on each player’s personality traits and leadership characteristics.

“[The new leadership structure] has been beneficial in that way of people are not on an island of being one of two captains,” Buzzerio said. “Having multiple groups of five or six people allows us to communicate between each other better because more people know what happened in a coaches’ meeting or between multiple players.”

While juniors like Buzzerio and middle Blocker Hannah Clayton are looked up to as leaders on the team, younger players like Boyer have stepped up as well.

Freshman setter Bailey Ortega has been praised by her teammates for the energy she brings to the court and the confidence boost she provides when the team is in tough spots.

“Joslyn Boyer, as just someone who has taken control of our first contact, has been so much more aggressive and is learning her team and just taking the game into her hands a little bit more,” head coach Vicki Brown said. “It’s just great to have Bailey’s vocal leadership and Courtney’s get-it-done leadership as well.”

While the Hawkeyes are inexperienced on paper, they say they feel like they’re beginning to build the rapport of an experienced group.

“[The new leadership structure] created space for people who usually don’t step up to step up,” Jones said. “Building new leadership roles can be tough, but I think that we have worked through it very well and have developed new leaders within the team.”