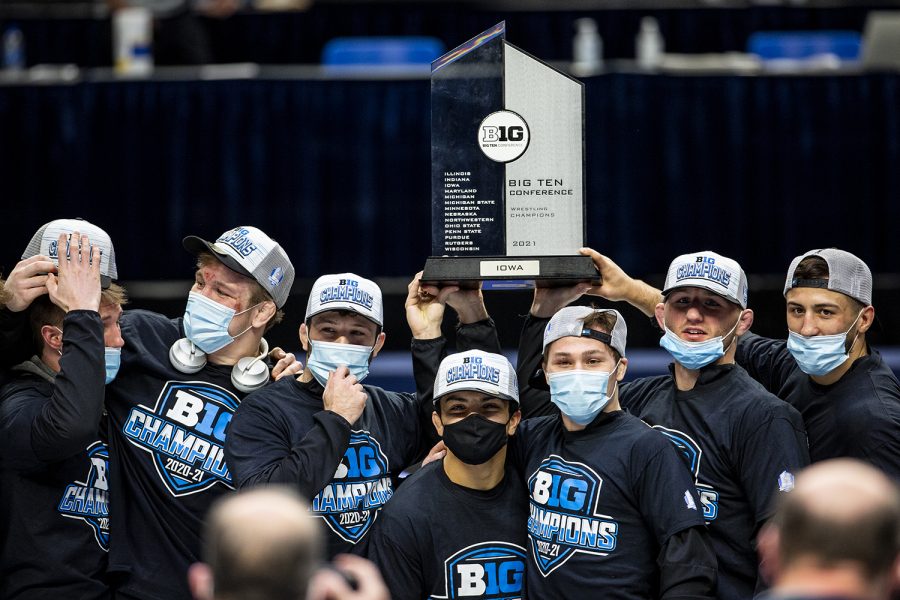 The Iowa Hawkeye Wrestling team poses with the Big Ten title trophy after winning the Big Ten Wrestling Tournament at the Bryce Jordan Center in State College, PA on Sunday, March 8, 2021. The Hawkeyes won the Big Ten Title with a team score of 159.5. This is the 37 Big Ten Title in Iowa school history. (Ryan Adams/The Daily Iowan)

STATE COLLEGE, Pa. — The Iowa wrestling program’s 37th Big Ten Championship was preceded by circumstances not present for the first 36.

For months, the Hawkeyes did not know when their season would start because of the COVID-19 pandemic, which shut down the 2020 season just ahead of the national tournament. Heading into the 2021 Big Ten Championships at the fan-less Bryce Jordan Center, Iowa had not competed since Feb. 7 after positive COVID-19 tests led the program to pause activities.

But there’s no disputing the Big Ten’s true champion.

“Everything was uncertain [this year], and that uncertainty was part of the conversation,” Iowa head coach Tom Brands said. “ We had to be ready for everything this season.”

The Hawkeyes were ready over the weekend in State College.

Or, as Brands likes to say, they were “ready, ready.”

Austin DeSanto (133) and Kaleb Young (157) lost their finals matches on Sunday to finish in second place. Jacob Warner (197) and Tony Cassioppi (285) ended the tournament in third place, while Nelson Brands (184) came in fourth.

The Hawkeyes used six pins, two technical falls, and two major decisions on their way to 159.5 points, a total that surpassed the 157.5 that won Iowa the tournament a year ago.

Max Murin (141) is the only Hawkeye to not place at Big Tens, but will likely receive an at-large bid to the NCAA Championships, which start March 18 in St. Louis.

“A lot of us are happy with how we competed,” Lee said. “But we wanted everyone to be in the finals. We wanted 10 finalists. We’ve got things to improve on. We’re going to have 10 at nationals and we have to be ready to go.”

Lee and Brands were named the Big Ten Wrestler and Coach of the Year for the second season in a row after the tournament ended. This is the second and fifth times those two have earned those honors, respectively.

Lee defended his first Big Ten title last year by defeating Purdue’s Devin Schroder in the finals via 21-3 technical fall. Over the two-day tournament, Lee outscored his three opponents 44-7 on his way to becoming the third Hawkeye to win Big Ten Wrestler of the Year multiple times.

Uncharacteristically, Lee surrendered a takedown to Schroder and trailed 2-0 at the start of his championship match. But a 21-1 run full of plenty of takedowns and nearfall points put Lee on top and ended the match in the second round.

Was there ever a doubt?

Minnesota’s heavyweight Gable Steveson, who has won the past two Big Ten titles at 285 pounds and was named the outstanding wrestler of the 2021 championships, said Lee is “no-question” the best pound-for-pound wrestler in college wrestling.

Two finals matches after Lee took the mat, Eierman’s 6-5 decision over Penn State’s Nick Lee earned him fourth career conference championship, but first in the Big Ten as a Hawkeye.

Eierman won three MAC championships at 141 pounds in his time at Missouri. He closed out his first Big Ten Tournament in his first year as a Hawkeye just the way he imagined he would.

“This is an unreal feeling. Last year I was on the outside looking in. It’s a lot more fun being on the inside. I’m getting a better feel every match. This is a great tournament, a great opponent every match. It is a great preview for nationals.”

Emotional moment for @JEierman141 after winning a Big Ten title in his first season with @[email protected] | @trackwrestling pic.twitter.com/JjHK2khS8Y

Eierman’s victory clinched Iowa the team title. But there was never much doubt the heavily favored Hawkeyes were going to come out on top.

Iowa went 28-8 overall on the weekend. The Hawkeyes led by as many as 49 points and entered Sunday with a 23-point advantage. But Iowa certainly didn’t let up after securing the team’s honor.

At 165 and 174, Marinelli and Kemerer hit milestones in back-to-back finals matches.

Coming into this year’s tournament, Marinelli had only competed two times this season. He tested positive for COVID-19 after Iowa’s Jan. 22 dual with Minnesota and had not wrestled since.

“It’s just as sweet [as the other two],” Marinelli said. “The only thing I can say is that I am thankful to be wrestling with my guys. We have waited a whole year and come full circle. I am thankful to be on the board with the three-time champs and feel very blessed. I have the best teammates and coaches in the world.”

How does this Big Ten title compare to the other two for @alexmarinelli65?

A two-time Big Ten runner up, Kemerer finally won his title in finals attempt No. 3.

The Murrysville, Pennsylvania, native defeated Penn State’s No. 3 Carter Starocci by 7-2 decision for the victory. Kemerer had previously lost in the 157-pound finals in 2017 and the 174-pound finals last year.

“Knowing how it feels to not be on top makes it feel better,” Kemerer said. “I watched some of my teammates win it last year, so I felt like I was missing out. I wanted to finally get that title.”

This is the first time since 2001 that Iowa has four individual conference champions. And all of this year’s champs figure to be back on the team next season. All four of Iowa’s one seeds won titles and nine of the team’s wrestlers wrestled at or above their seed.

Iowa did everything it was supposed to do coming into championship weekend. But the expectations don’t stop there.

And a national champion will be named on March 20.