While the Hawkeyes finished in eighth place, Iowa also came out of its final Big Tens with several record-breaking performances. 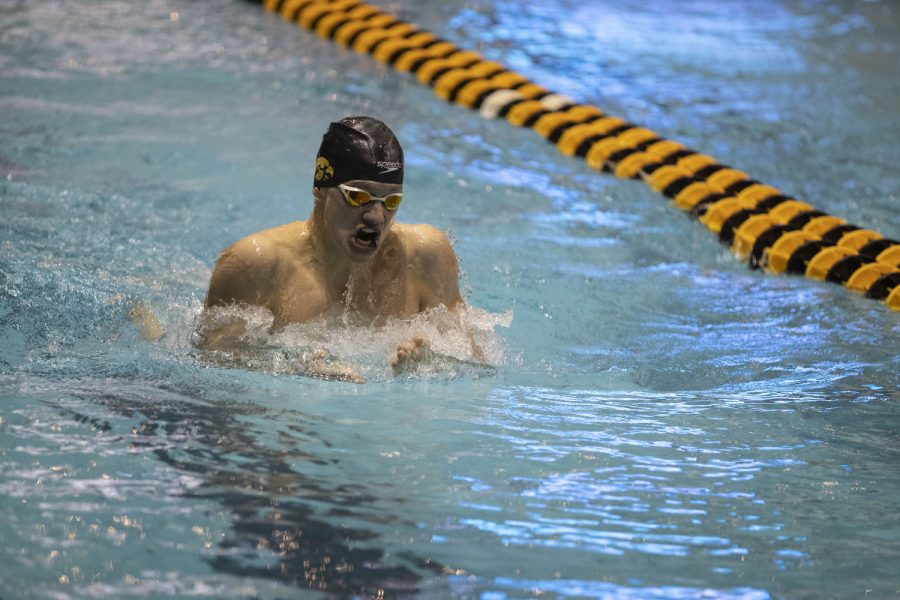 Anze Fers Erzen competes in the Men's 200 Individual Medley bonus final during the second day of the 2019 Big Ten Men's Swimming and Diving Championships at the CRWC on Thursday, February 28, 2019. Fers Erzen placed sixth in the bonus final with a time of 1:46:92.

The Iowa men’s swimming and diving team came out of Columbus, Ohio, with an eighth-place finish in the program’s final Big Ten Championships.

After the men’s diving team competed in its conference championships last week, the swimming portion of the Big Ten Championships took place from Tuesday to Saturday.

The Hawkeyes were led by Anze Fers Erzen. The 2020 College Swimming & Diving Coaches Association of America All-American scored points for the team in several events and placed in the top 10 in both the 200 and 400 IM.

Fers Erzen was also a part of the record-breaking 400-medley relay team which featured Will Myhre, Sergey Kuznetsov, and Aleksey Tarasenko as well. The four combined for a time of 1:25.53. The time secured seventh place and ranks in the top 15 nationally this season.

Another record broken at the meet came from Will Myhre in the 100 breast. Myhre broke the school record in the prelims with a 51.81, and then again in the finals with a 51.70 time and a sixth-place finish.

Tarasenko has been the Hawkeyes’ best short distance swimmer in freestyle, and that trend continued into the conference meet. Tarasenko finished 14th in the 50 and 11th in the 100; both were team bests.

The Hawkeyes saw big performances in the 500 free, with three swimmers finishing in the top 15 for the event. The team’s top placer was Mateusz Arndt, who delivered a 10th-place finish. He was followed by Evan Holt in 13th, and Andrew Fierke in 14th.

Ardnt was the team’s top finisher in the 200 free. He recorded a time of 1:35.77, which was another 10th-place finish. Once again, he was followed by Fierke, who finished in 12th. Other notables from the event include Tarasenko in 16th place.

In the final event of the meet, the Hawkeyes 400 free relay team consisting of Tarasenko, Kuznetsov, Purdy, and Arndt finished sixth overall with a time of 2:53.98

As a team, the Hawkeyes finished eighth place overall with 465.5 points. Michigan claimed the team title with 1,196 points.

A handful of Hawkeyes are hoping to qualify for the NCAA Championships. But for the rest of the team, the week marked the final time they will compete for Iowa because of the school’s decision to cut the program after the 2020-21 academic year.

The team will now have to wait to see which swimmers receive bids to compete in the NCAA Championships held March 24-27 in Greensboro, North Carolina.