Gov. Kim Reynolds received the Johnson and Johnson vaccine at a press conference on Wednesday to encourage others to trust the new vaccine. 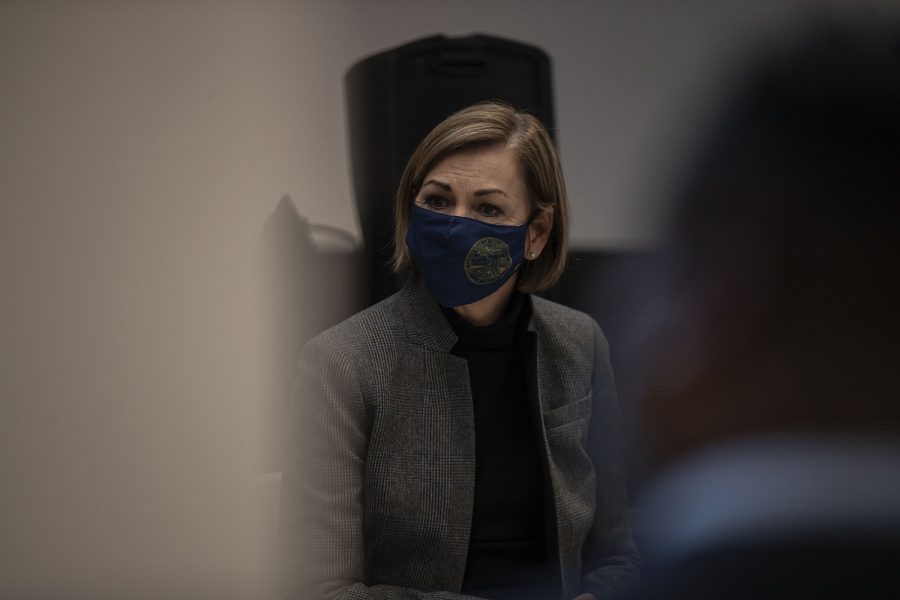 Gov. Kim Reynolds received a dose of the Johnson and Johnson vaccine at a press conference on Wednesday and encouraged Iowans to get whichever vaccine is available to them.

Executive Dean of the University of Iowa Carver College of Medicine Pat Winokur joined Reynolds at the press conference to vouch for the effectiveness of the Johnson and Johnson vaccine. Winokur said a 70 percent efficacy rate is outstanding, and that the vaccine is nearly 100 percent effective in preventing COVID-19 hospitalizations.

“People have gotten caught up with 70 vs 90,” said Winokur, UI Hospital and Clinics’ lead vaccine researcher. “When you look carefully at the data, it is exceptionally good in preventing severe illness.”

Reynolds said Iowa will receive 25,600 doses of the Johnson and Johnson vaccine on Wednesday and Thursday as the state plans to vaccinate the next eligible population. Reynolds said they’re projecting to have 160,000 people who work in food distribution and manufacturing to be vaccinated in the next five weeks.

Johnson and Johnson being a single-shot vaccine is also a game-changer for Iowa’s vaccine rollout as the state has fallen behind in administering second doses.

Reynolds said as of Feb. 27, 344,500 COVID-19 vaccine series have been administered and 12 percent of those people are still waiting for second doses. She said 77 percent of overdue boosters are among pharmacy providers, and that the federal long-term care pharmacy partner failed to transfer and register reported doses.

Reynolds said that 23 percent of eligible Iowans 18 and older have received their first dose, and 121,000 doses have been administered in the last seven days.