For three years, Iowa Writers’ Workshop alum Kiley Reid worked in an office as a receptionist. Now, she’s the New York Times bestselling author of, “Such a Fun Age,” a novel that satirizes the white pursuit of wokeness. 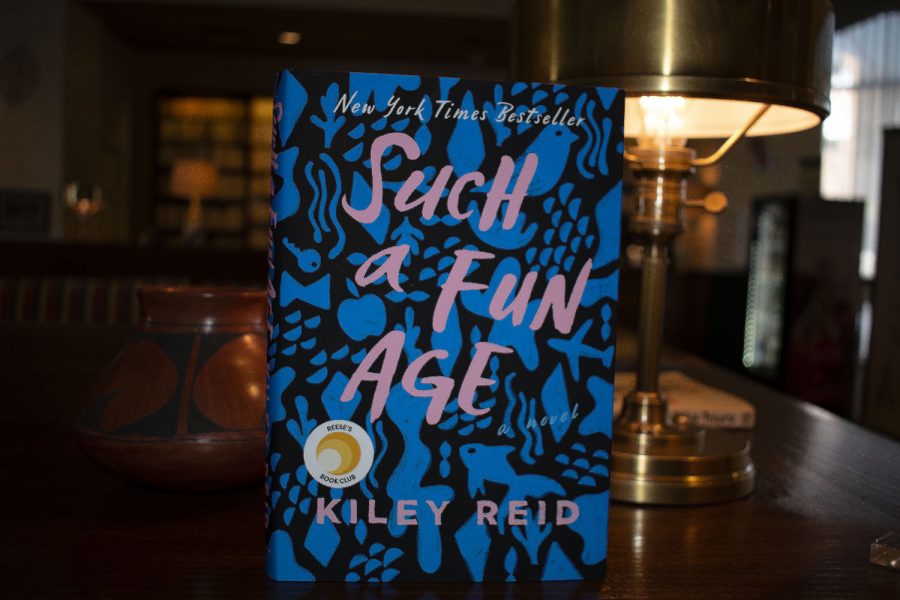 Awkward situations, racist remarks, and class in America; these are all aspects of modern culture that author Kiley Reid wanted to explore when she began writing her 2019 debut novel, Such a Fun Age, a fiction novel which both effectively and subtly scrutinizes the current forms of racism in America.

Now a graduate from the Iowa Writers’ Workshop, Reid has become a New York Times Bestselling author whose novel has been named a Best Book of the Year by NPR, Vogue, The Washington Post, The Chicago Tribune, and multiple others. The novel’s rights have been acquired by both Lena Waithe’s Hillman Grad Productions and Sight Unseen for a film adaptation, though the film’s release date remains unannounced.

Such a Fun Age follows a 25-year-old Black woman named Emira, who takes on a nannying position for a white family prior to her commitment to “a real job.” Not far into the novel, Emira is accused of kidnapping the child she nannies while the two are out at an upscale Philadelphia grocery store. The story escalates as the characters navigate the situation and continue to be faced with countless other uncomfortable situations.

Reid planned to become an actress after earning her bachelor’s from Marymount Manhattan University. Reid said she had always liked writing but thought of it more as a hobby. It wasn’t until after graduation, amid one of the biggest breaks of her acting career — a $500 paying commercial — where Reid said she felt like Kris Jenner in that moment, she realized acting wasn’t the most authentic mode of storytelling for her. She wanted to be the one writing the stories.

With her newfound understanding, Reid ventured into her freshly chosen career path as a writer. For three years, she worked as a receptionist, coming home to submit her stories to literary journals and write unremittingly. She then applied to graduate school two years in a row. The first year, she received nine rejection letters. But by the second year, she got nine acceptances.

Nestled among this new pile of acceptance letters was one from the Iowa Writers’ Workshop, which Reid ultimately decided to accept because of its potential for scholarships and stipends, its second-year teaching program, and the quietness a place like Iowa City offers writers.

“The quiet; the in-expense to living,” Reid said. “I lived near the graveyard, and I would write, and I would go for walks, and there’s something about being able to be in nature and find a lot of quiet that really helps me get my thoughts in order in my head. So, I would say that Iowa was a huge help and that it’s just a really nice place to write and really foster creativity.”

Now an alum of the program with an impressive amassment of short stories and a novel that has attained nationwide acclaim, Reid has continued to write and teach students at Temple University. Reid said taking a red pen to others’ work helps her do the same with her own. With years of experience under her belt, she offered some advice to young writers.

“I think something I wish I had learned a little bit early on is that part of writing is being very comfortable with your writing,” she said. “When it’s not good, getting it out on the page is the thing that helps you make it better. So many times, you have this great idea. You go home to write it, and you write it and you’re like, ‘Oh god, this is trash,’ and that’s, that’s what it is, at that moment. That doesn’t mean that it will forever be that.”

Reid also emphasized that, in order for a novel to be sustainable, the content a writer deals with should be endlessly exciting and interesting to them. Reid calls this, “following your obsessions,” a mantra which propelled her to success with Such a Fun Age and continues to be a driving force in her present endeavors. Reid said there’s an aspect of heart in writing that is always clear to her — an energy that distinguishes good writing from bad. When one is reading a story and can tell the author needed to tell it, there is a palpable feeling of fire and spirit beneath the words on the page.

Some of Reid’s “obsessions” throughout her time writing Such a Fun Age were issues of class and race, working with women characters, and “making things as awkward as possible.” Her upcoming novel will retain many of these same ideas, but she said her interests grow and take on new forms every day.

Reid’s process of writing her new work of fiction has also evolved. In an effort to produce a truly page-turning novel, Reid has employed a new method of writing that involves writing everything out by hand, with each paragraph or line on a different index card which she then lays out and structures as she sees fit.

“All of my fiction is fairly plot driven, and so, there is a lot of structuring and list-making and orders of events,” Reid said. “… So, there is some structure to it, but sometimes when I go into writing a scene, I just write everything that I think could potentially happen in that scene. It’s very messy. It looks like I’ve had a breakdown a little bit.”

Along with writing and teaching, Reid also works as the executive producer for the film adaptation of Such A Fun Age. Filming of the movie takes place in the location of the book, Philadelphia, the charming and exciting city that Reid said she hopes will make several on-screen appearances.

The author also added that she hopes Emira’s relaxed personality and effortless way with children remains evident in the film.

“I’m very excited to let the experts do what they do best, and also weigh in to keep the spirit of the novel alive,” she said. “Both teams are wonderful to work with and I can’t wait to see how this story is told on screen.”

According to the Harvard Review, one of the most alluring aspects of Reid’s storytelling in Such a Fun Age is her ability to speak on racial issues without creating overtly racist situations. Although the plot is centered around a more blatantly racist event, racism in the book also manifests in more nuanced ways, like through an educated white character’s off-putting pursuits of “wokeness,” and the ill-defined moments of microaggression and ignorance.

“There is a really thin line of balance between depicting something that is nuanced, yet familiar. And that’s what I really look for in writing,” Reid said. “When you’re reading something and you say, ‘Oh my God I never thought about it that way,’ but that’s exactly how it is, like it’s so accurate that it seems new, Those are the moments that I really, really love.”