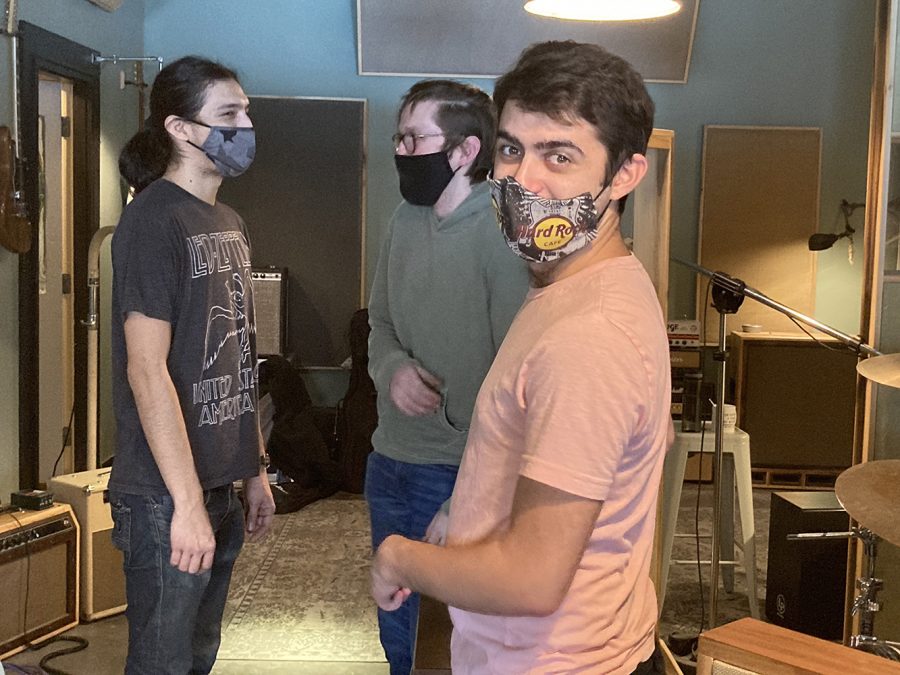 Citrus Sunday lead singer Travis Siegel once told The Daily Iowan that an album for the band would rise “from the ashes.” The pandemic-born LP, entitled First Light, will release on March 5 with 12 original tracks surrounding blues, psychedelic, and hard rock genres.

The rock band is composed of Siegel, drummer Ben Yusen, bassist Mitch Wisniewski, rhythm guitarist Ethan Adato, and guitarist and background vocalist Kameron Morrie Peck-Valdivia. All five members will graduate from the University of Iowa this spring.  The band formed three years ago after meeting through Iowa Hillel.

When the COVID-19 pandemic hit, the band lost its rehearsal space at Iowa Hillel, so they moved to Wisniweski’s basement. But, that didn’t stop the band from working harder on new material and continuing to collaborate, even if it was in a different format then they were used to.

After months of working in all different locations, the band came back together in the same location in early January. While many of the songs were penned throughout the pandemic, the band quickly wrote some of the songs right before recording.

“We have known we wanted to record an album for over a year,” drummer Yusen said. “COVID sort of threw us for a loop, but we’ve come back stronger.”

Because it’s the band’s final year with all its members based in the Iowa City area, the album signifies their journey of working together over the past four years. The band released an EP, a shorter album, titled “Terry’s Revenge” last fall, but this LP, which stands for long-playing vinyl record, is its first lengthy project. After spending thousands of hours together not only playing music but also hanging out, the band members agreed that it is no surprise they all have an extremely close bond with one another.

“This started just as something fun that we’ve been able to do for so long and grow because of it,” guitarist Adato said. “I self-taught myself how to play and have seen my own growth as a musician through playing with these guys.”

Leading up to the release of the album, Citrus Sunday has released three singles in anticipation for the big release. Beginning on Valentine’s Day, the band released “Fade,” followed by “Run Little Boy, run” and “Doctor’s Note” each Sunday after.

Recording the LP at Flat Black Studios in Lone Tree, Iowa, had its ups and downs. With only a week in mid-January to record all 12 tracks, and one of the only times they had been able to meet together in person because the COVID-19 pandemic, it wasn’t smooth sailing at first, said bassist Wisniewski.

“There was tons of arguing between us as a band, especially because some of the songs we had only written a couple weeks before we started recording,” Wisniewski said. “We just wanted to produce our best work and not waste the time of our wonderful engineers.”

After completing the album’s music, the final step was to create a title that would capture the audience’s attention.

At the end of 2020, Little Village magazine named Citrus Sunday’s EP as one of the best albums to have been recorded at Flat Black Studios.

Before the official release of the LP on March 4, the Iowa City community can catch a professionally recorded show of Citrus Sunday through the UI Campus Activity Board’s website or through the Facebook event. The performance will be filmed at the Iowa Memorial Union and available for UI students to watch. When the LP is released, listeners can find it on all streaming platforms including Apple Music and Spotify.

“For us, the album and the opportunity to have a professionally filmed show is just the icing on the cake,” lead vocalist Siegel said. “We don’t know where the road will take us after this, but it has sure been a great ride.”