University of Iowa's Dance Marathon participants did some digital boogying to recreate fundraising festivities on Friday and Saturday. 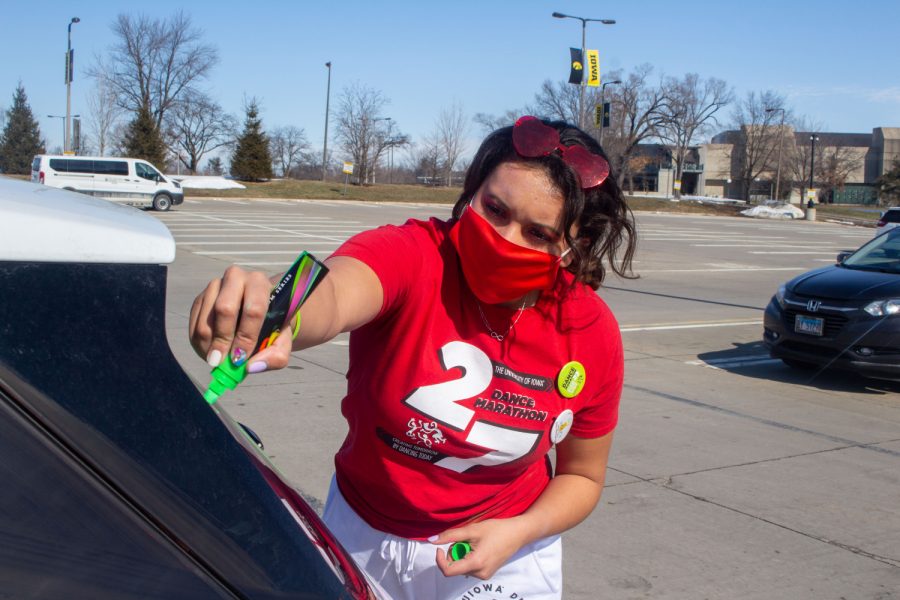 Katherine Yacopucci, a University of Iowa freshman and Dance Marathon 27 morale captain, said she participated in this year’s virtual “Big Event” with the same motivation she would during an in-person event.

“‘I took over one of the lounges in Catlett, met up with my lime captain while socially distancing, and had so much fun,” Yacopucci said. “The DJ was on the live stream, and how can you not jam to his music? There was lots of dancing like there normally would be, it just happened to look a little different.”

Like Yacopucci, all Dance Marathon 27 student fundraisers and families participated in the annual Big Event online after the organization’s leaders decided to host it virtually because of COVID-19 concerns.

In previous years, the university’s Dance Marathon has held its annual Big Event in the Iowa Memorial Union, featuring dancing in the main lounge and other ongoing activities throughout the building.

Dance Marathon 27 Executive Director Elizabeth Jackson said that, in years past, Dance Marathon has hosted a live stream event for the public to watch online. To virtually incorporate the event’s typical dancing and entertainment, she said scheduled events held in Zoom rooms were available for students who reached a $250 fundraising minimum, as well as Dance Marathon families.

“Anything external involving families, the hospital, and sponsors, was all pre-recorded,” Jackson said. “Morale captains were always bringing that hype and brought it virtually this year. We pre-recorded the morale dance to play at the top of every hour, and family speakers with pre-recorded presentations were aired too.”

UI sophomore Sydney Fuller, a Dance Marathon 27 morale captain, said that — although the Big Event’s online program was a unique experience compared to the previous year — the cyber-activities remained engaging.

“The [Zoom activities] were awesome. I got the opportunity to attend a yoga class with Benders Studio. We also had an Among Us Zoom where we all went into breakout rooms and played the app on our phones online together,” Fuller said. “I really think Dance Marathon went above and beyond this Big Event by coming up with new ways to keep everyone involved and driven during the 24 hours.”

“It would have been tough to have everyone up on their feet for 24 hours while participating from a computer only a few feet from the bed they sleep in,” Mougin said. “Even with the event being virtual, everyone gets to reconnect, and we still get to do this for the kids.”

Keeping with its dancing tradition, all Dance Marathon fundraisers and families came together on one Zoom call to dance through Power Hour, Mougin said.

As previously reported by The Daily Iowan, “Power Hour” takes place during the final hour of Dance Marathon’s Big Event. Dance Marathon participants crowd together and dance for the 24-hour event’s final juncture.

UI junior Maddie Weber, a Dance Marathon 27 morale captain, said this year’s Power Hour was unlike any other she’d experienced before.

“When dancing over Zoom, you had to create your own energy. Usually, you feed off everyone else and there’s a lot of excitement. This time, you kind of created it yourself,” Weber said. “The executive team did a great job with the virtual setting. Even if you were dancing alone, it was really cool that there was the Zoom and also the livestream of the Zoom so that people could see all of the dancers.”

Although Dance Marathon 27 was a success, Jackson said the process of restructuring the Big Event online could at times be dismaying. Through the shifting plans, she said she continued to keep in mind the fundraiser’s overall purpose.

“At the end of the day, no one was too excited for a virtual event, so expectations were probably non-existent,” Jackson said. “It was more just a curiosity to start, but it’s been satisfying to see what amazing things we’ve done with it. We know that probably for the next few years of maybe needing to make this virtual, we’ve created something sustainable.”