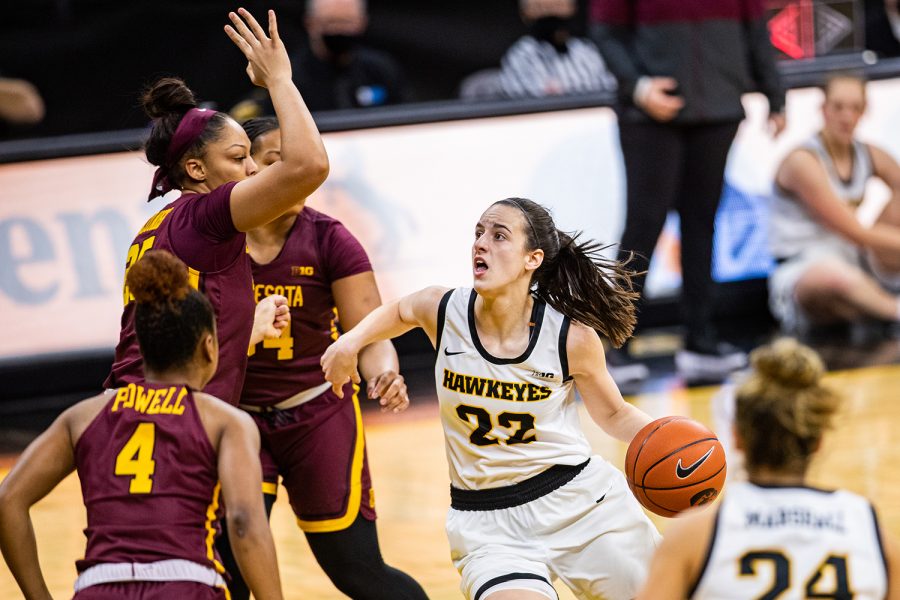 Iowa guard Caitlin Clark drives to the rim during a women's basketball game between Iowa and Minnesota at Carver-Hawkeye Arena on Wednesday, Jan. 6, 2021. The Hawkeyes defeated the Golden Gophers, 92-79.

After plenty of uncertainty following a delay about 15 minutes before tipoff, Iowa women’s basketball got its game in against Michigan. Tipping off five hours from its original tip time of 3:30, Iowa certainly made the wait worth it in a dominant 89-67 win over No. 12 Michigan at Carver-Hawkeye Arena.

After a slow start from both teams, it was Caitlin Clark who struck first in the game, making two 3-pointers in a row to help Iowa out to an 8-2 lead. Iowa started the game strong defensively and kept the same energy throughout the game, holding Michigan to just 35.6 percent from the floor and 21.1 percent from the 3-point line in the contest.

After the incredible start from Iowa, Michigan clawed its way back into the game with a 14-3 run of their own to get them back into the game. Iowa dominated after the Michigan run, managing to get consistent stops on defense while lighting it up on offense.

At one point in the third quarter, Iowa was shooting an astounding 71.4 percent from the floor and 70 percent on 3-pointers.

After Michigan managed to pull it within 20 in the third quarter, 3-pointers from Clark and Tomi Taiwo assured Iowa would stay in control. From then on, it was a stroll for the Hawkeyes, who managed to get everyone on the floor late on.

It was Goodman’s second highest scoring night of the season and her highest in Big Ten play as she filled in admirably for Monika Czinano.

Iowa’s next game is against the Wisconsin Badgers on Sunday in Madison, Wisconsin.