Nunge, McCaffery injured in Iowa’s 79-57 loss to No. 3 Wolverines 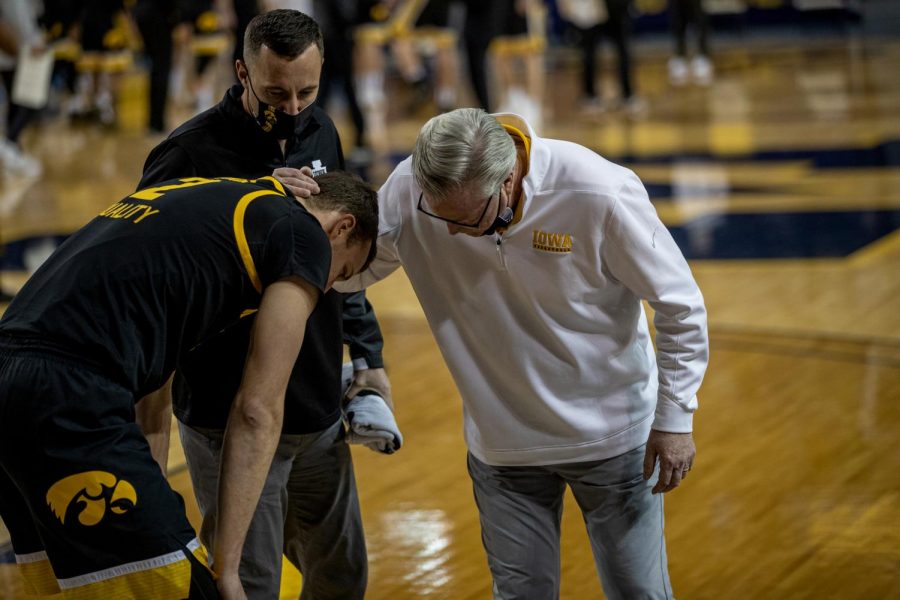 Iowa head coach Fran McCaffrey and Athletic Trainer Brad Floy check on forward Jack Nunge (2) after an apparent injury during the first half of a men’s basketball game at the Crisler Center in Ann Arbor, Michigan on Thursday, February 25, 2021. Nunge was helped off the floor and to the locker room before later returning on crutches. McCaffrey said after the game that Nunge will undergo an MRI the following day. The Michigan Wolverines beat the Iowa Hawkeyes by a score of 79-57. (Jake Maish/The Daily Iowan)

ANN ARBOR, Mich. — No. 9 Iowa men’s basketball’s trip to Ann Arbor, Michigan, Thursday night proved to be incredibly costly for the Hawkeyes, as juniors Jack Nunge and Connor McCaffery were both injured in a 79-57 loss to No. 3 Michigan.

Nunge, a forward from Newburgh, Indiana, went down near the baseline with just under 12 minutes remaining first half as a result of what appeared to be a non-contact injury.

Nunge was jockeying for post position with Wolverine forward Brandon Johns Jr. when he suddenly and gingerly limped toward the baseline boundary while the ball was still live.

With some help from his teammate, junior forward Michael Baer, and a few of the Hawkeyes’ athletic trainers, Nunge made his way back to the locker room.

Shortly after, Iowa men’s basketball announced that Nunge was doubtful to return to Thursday’s contest with a right leg injury.

Before the second half began, Nunge returned to Iowa’s bench sporting a pair of crutches.

“We’re going to do an MRI on Jack tomorrow, so we’ll know more then,” head coach Fran McCaffery said postgame.

Nunge has previously suffered a right leg injury. In 2019-20, Nunge’s season was prematurely terminated after her tore his anterior cruciate ligament (ACL) against Cal Poly on Nov. 24, 2019.

“I don’t even know what [the status] is on Jack,” senior point guard Jordan Bohannon said postgame. “Knowing the road he’s gone through, beginning the season with [his father’s death] and, hopefully, I’m praying it’s not the same thing as his ACL as last recovery he had to go through because that kid’s been through hell. He’s one of my best friends, and I can’t even think about what he’s going through mentally. We just have to be there for him and try to keep him positive through these tough times he’s going through because we all need him out there. He’s a big part of this team … We just have to be there and just love the kid and hopefully the best will show up at the end.”

The Hawkeyes missed Nunge’s presence on multiple fronts for the remainder of the game. Without Nunge, Iowa’s bench only scraped together eight points. The Hawkeyes were also outrebounded, 41-32.

“He’s an incredibly valuable member of our team in so many different ways,” Fran McCaffery said. “He gives us versatility, especially when you’re playing a team that’s really big, like Michigan, you need that other big guy in there. He’s a high-level rebounder. He’s a shot blocker. But he’s also a scorer. He gives you another offensive weapon.”

Nunge’s offensive production wasn’t just missed by the Hawkeyes Thursday, it was sorely needed as senior center Luka Garza clawed his way to just 16 points at the Crisler Center. Garza only converted on eight of his 19 shot attempts, good for an abysmal 31.6 shooting percentage.

“I think there were a couple good possessions where [Michigan] played good defense and changed my shot,” Garza said. “For the most part, when you look back at it, just some missed wide-open layups. Obviously there’s always a contest when I catch the ball. Those are shots I normally make. They’re easy shots for me, shots I practice all the time.”

“There’s no shot out there I felt like I couldn’t make,” Garza said. “So it was just, you know, it was tough. I want to be good for my team in games like this and tonight just wasn’t my night. I tried to keep battling, and just keep working, keep getting position, but it just wasn’t bouncing my way. I couldn’t finish, and that’s something that rarely happens to me every once and awhile. Tonight was just one of those nights where I couldn’t make a shot.”

Garza’s offensive woes – coupled with Connor McCaffery’s injury – may also be the root cause of the season-low, four-assist total Iowa posted in Ann Arbor.

This season, Connor McCaffery’s 85 assists are second-best on the Hawkeyes’ roster behind only Bohannon, who is just three assists away from passing Jeff Horner and becoming Iowa’s all-time leading assist man.

“With regard to [Connor’s injury], it looked really bad at first,” Fran McCaffery said. “He went in [the locker room] and he did a little bit of stuff, said he could’ve played. I don’t think so. So, our hope is to get him ready for Sunday.”

With a 27-point loss to Michigan now on its ledger, Iowa will head to Columbus, Ohio, Sunday for a matchup with No. 4 Ohio State. Both the Buckeyes and Hawkeyes will enter the clash at Value City Arena fresh off a loss, as Michigan State downed Ohio State, 71-67, Thursday evening.

Tipoff between Iowa and Ohio State is scheduled for 3:05 p.m. The game will air on CBS.