Iowa soccer lost 3-0 in its second game of the season. 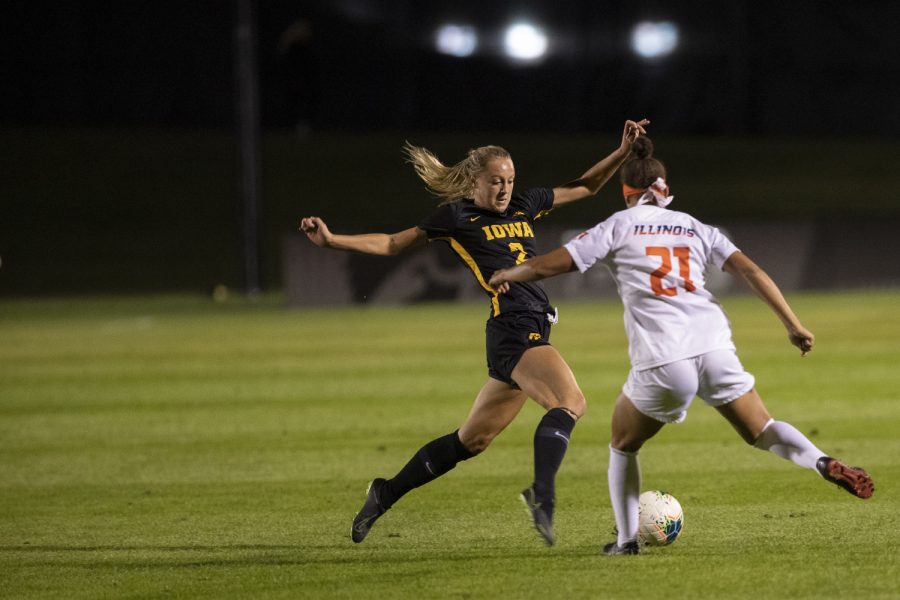 Iowa midfielder Hailey Rydberg tries to block a pass during a soccer game between Iowa and Illinois on Sept. 26, 2019 at the Iowa Soccer Complex. The Hawkeyes defeated the Fighting Illini, 3-1.

The Iowa soccer team lost to Illinois, 3-0 in Champaign, Illinois, Thursday afternoon in its second game of the season.

The loss is the second in a row for the Hawkeyes in 2021.

Pasquale didn’t waste any time after halftime, scoring once again 10 minutes into the second half to give the Illini a 3-0 advantage.

The Hawkeyes created plenty of chances in the contest. Junior midfielder Hailey Rydberg led the way for the Hawkeyes with a team-high four shots, three being on goal. Iowa led Illinois in shots (13-9), shots on goal (8-7), and corner kicks (7-3), but Illinois goalkeeper Sami Sample saved eight of 13 shots in the contest.

Redshirt sophomore Monica Wilhelm stared in goal for the Hawkeyes. Wilhelm played all 90 minutes. Junior defender Sara Wheaton was the only other player to accompany Wilhelm with that total.

Iowa, who has a very young team this season, started four freshmen. Rielee Fetty, Meike Ingles, Aleisha Ganief, and Maggie Johnston. Fetty and Ingles made their first career start — after coming off the bench in the season opener against Wisconsin — playing 75 and 64 minutes, respectively. For Ganief and Johnston, it was their second start of the season. Of the 28 players on the Hawkeyes roster, eighteen of them are underclassmen.

Next up, Iowa will look to rebound as it travels to Bloomington, Indiana, on Sunday at noon to face off against Indiana.