The men’s team is looking to keep their undefeated conference record against Nebraska and the women’s team looks to make program history this weekend against Indiana and Purdue. 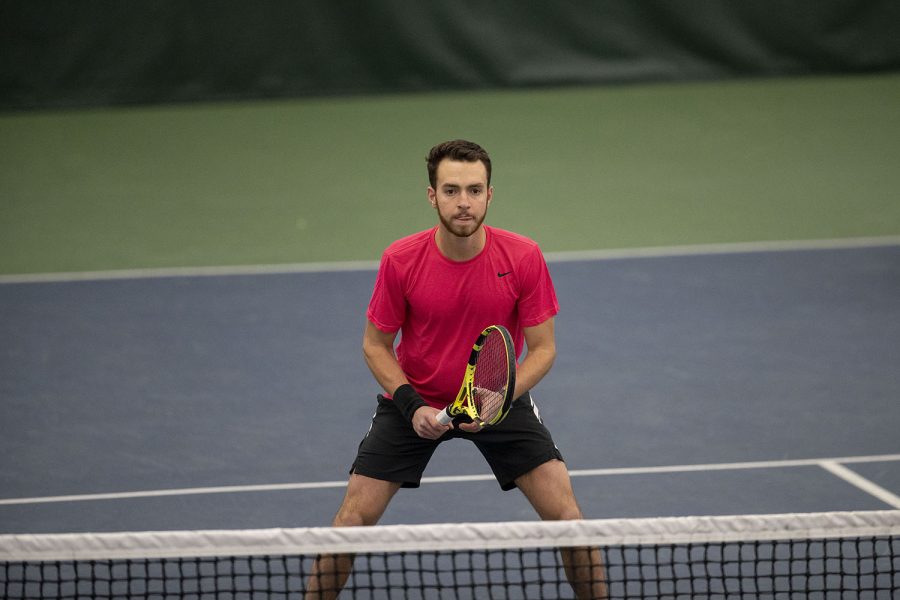 Iowa’s Kareem Allaf looks to the ball at the Iowa Men’s tennis meet v. Indiana in the Hawkeye Tennis and Recreation Complex on Friday, Feb. 19, 2021. Iowa defeated Indiana with a score of 5-2.

The Iowa men’s and women’s tennis teams are both set to compete in Iowa City this weekend as the men’s team faces a busy three-day stretch at the Hawkeye Tennis and Recreation Complex.

The men’s team faces off against Nebraska Friday at 3 p.m., and the women’s team returns home after a two-match away stretch to host Indiana and Purdue on Friday and Sunday, respectively.

The Nebraska men’s team is 0-2 to start the season after losing both matches at home on opening weekend. The Cornhuskers’ losses to Indiana and Purdue should give the Hawkeyes confidence, as Iowa blew past both of those teams without much difficulty.

“We stick to a lot of simple tasks out there, whether it is making first serves, putting returns over the net at the net strap, and taking care of volleys on our chest,” Iowa men’s tennis head coach Ross Wilson said. “If we can do those things in doubles, then we are going to be very successful and in singles, if guys can play their game and play it effectively, and they are hitting out and playing to win, then we are going to win a lot of matches.”

The men’s team is currently on a 12-match win streak at the Hawkeye Tennis and Recreation Complex that it is hoping to continue this weekend.

Iowa is 14-9 all-time against Nebraska, and the Hawkeyes have won their last five matches against the Cornhuskers.

Sixth-year senior Kareem Allaf is coming into the matchup ranked 37th nationally — the highest ranking ever for a Hawkeye. Iowa also sports the No. 17 doubles pair in the nation of Oliver Okonkwo and Will Davies, who have lived up to their ranking so far with a 5-0 record this season.

Nebraska does not have any ranked players in singles or doubles.

The women’s team will face off against a 1-3 Indiana team Friday at 3 p.m.

Indiana currently leads the all-time series 35-13, but Iowa won the last matchup in 2019.

No. 97 Alexa Noel has started off the season 10-0 in singles and 9-3 in doubles. She earned her first career Big Ten Player of the Week honor last week after her performances against Illinois and Northwestern.

The Hawkeye women will also take on Purdue Sunday at 11 a.m.

Iowa faced the Boilermakers at the Purdue invitational during the preseason and grabbed four wins in singles and two in doubles.

The team as a whole is hoping to have its best start to conference play since 2006 if it can move to 5-1 after this weekend.

Hawkeye Sports is live streaming all three home matches this weekend on its website.