‘I got up at four o’clock like I do six times a week and jogged two miles:’ Chuck Grassley to announce potential Senate run by this fall

Sen. Chuck Grassley said he will make up his mind in the fall, and he hopes his age doesn’t impact voter’s opinion on if he is fit to run a campaign. 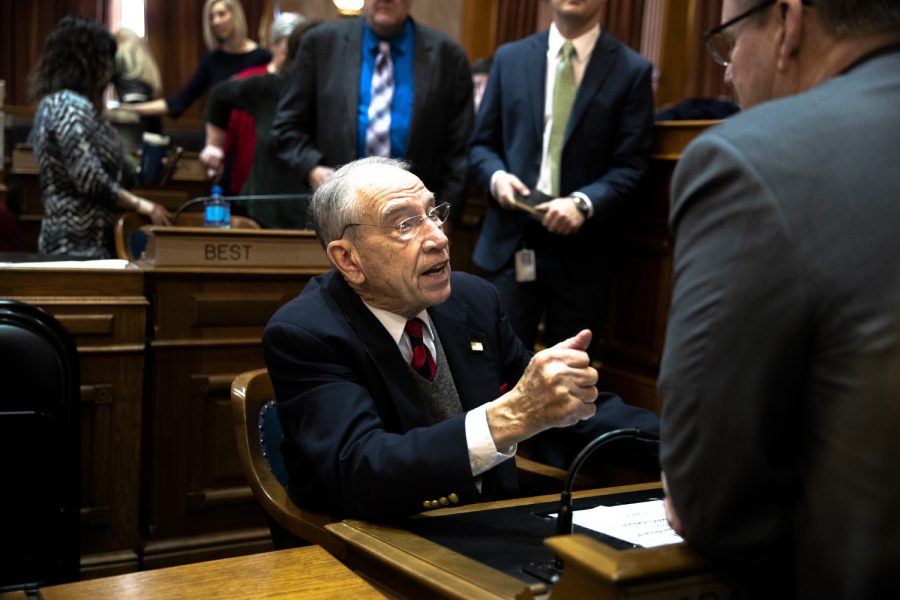 Sen. Chuck Grassley, R-Iowa., has a conversation at the Iowa State Capitol on Monday, January 13, 2020.

Sen. Chuck Grassley, R-Iowa, said he will announce his decision on whether he will pursue an eighth term in the U.S. Senate by this fall, adding that he hopes his age will not impact if people believe he is fit to run a campaign.

“My age comes up, and this morning I got up at four o’clock like I do six times a week and jogged two miles,” Grassley, 87, said during a Wednesday conference call with reporters. “If I can do that every day, I hope nobody has any questions about my ability to conduct a campaign. It’ll be up to the voters to decide whether or not I should be re-elected, but I hope they won’t say I can’t conduct a campaign.”

He said he will make up his mind about the election sometime in September, October or November. Grassley’s seventh senate term will end Jan. 3, 2023.

Of current senators, Grassley is the second longest serving. During the Trump administration, he was president pro tempore from 2019-2021. Grassley began in the Senate in 1981, after serving three terms in the U.S. House. He has represented Iowa in 24 consecutive U.S. Congresses.

Before his career in Washington began, Grassley served in the Iowa House of Representatives from 1959-1974. Now, a state senator is bidding for his seat.

Sen. Jim Carlin, R-Sioux City, announced on Feb. 15 he will be running for Grassley’s seat, which could mean challenging Grassley in a Republican primary. While announcing his candidacy, Carlin criticized the U.S. Congress for not investigating former President Donald Trump’s baseless voter fraud claims before certifying President Joe Biden’s victory.

Grassley voted to certify Biden’s electoral college win and told reporters on Wednesday that he was clear about Biden winning the election.

He was also questioned about an elections bill in the Iowa Legislature that was approved in the state Senate Tuesday night and will be up for debate in the House on Wednesday. Senate File 143 would shorten the absentee voting period from 29 days to 18 days, limit ballot collection, and penalize county auditors who don’t follow state laws regarding the voting process. It passed along party lines despite nearly 1,000 Iowans registering for a public hearing in opposition to the bill.

Grassley said he didn’t want to comment on the specific bill, but said state legislatures should be working to enhance protection of mail-in ballots.