The House State Government Committee held a public forum where nearly 1,000 Iowans registered in opposition to an elections bill that could shorten early voting. 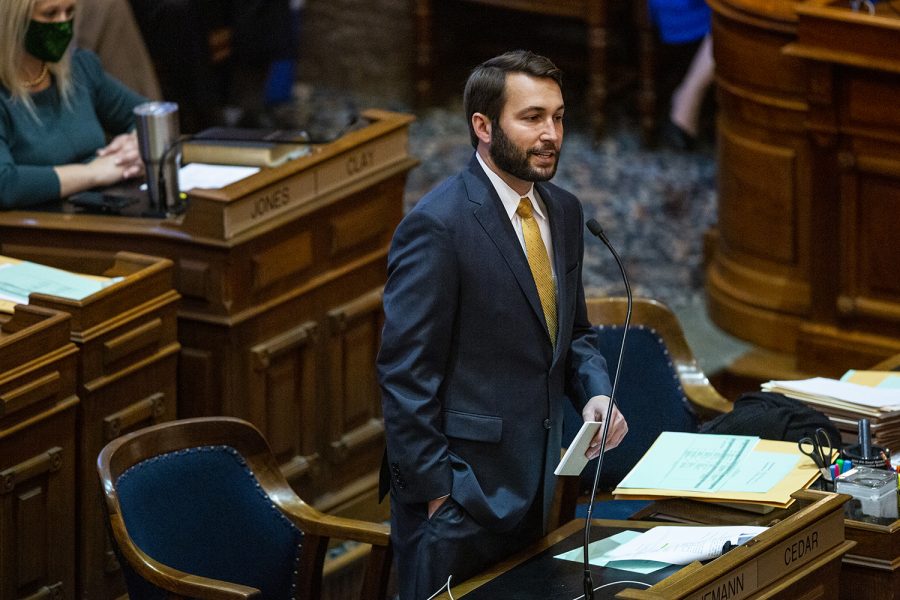 Rep. Bobby Kaufmann speaks during the opening of the 2021 legislative session on Monday, Jan. 11, 2021 at the Iowa State Capitol in Des Moines. Legislative goals for the session include further tax cuts, expanding in-person learning, and moving towards economic recovery from the COVID-19 pandemic.

Iowans shared their opinions Monday on a recently introduced elections bill that would shorten the early voting period, reduce the number of ballot drop boxes, and set criminal boundaries for auditors — and out of the nearly 1,000 people who signed up for the public hearing, only 23 people were in favor of the bill.

Rep. Bobby Kaufmann, R-Wilton, introduced House File 590 in the House State Government Committee on Feb. 18. As a proponent of the bill, he said it is designed to ensure that Iowans will have faith in Iowa’s voting process.

Kaufmann said during the Monday hearing that the Legislature intends to send the elections bill to Gov. Kim Reynolds’ desk by Wednesday night.

“This bill is about election integrity,” Kaufmann. “The biggest form of voter suppression is a very large swath of the electorate not having faith in our election system. For whatever reason, political or not, thousands of Iowans do not have faith.”

Members of the public who support the bill say the discussion surrounding the bill is important for fixing any flaws in the voting system.

This legislation aims to shorten Iowa’s early voting period to 18 days instead of the previous 29 days, limit absentee ballot collection, and set criminal boundaries for state auditors who fail to follow state rules regarding their counties voting process. At the end of the hearing on Monday, Kaufmann said he will amend the bill so that the early voting period would be 21 days.

House File 590 is in conjunction with Senate File 413 and both will be debated on the floor this week, in the Senate on Tuesday, Feb. 23, and in the House on Wednesday, Feb 24.

Janice Weiner, Iowa City City Council member, said that auditors need adequate time to react and process incoming votes. The bill would also affect individuals in assisted living communities who typically rely on ballot collection to return their ballots, because sometimes they have no other way to vote, she said.

“Shortening the absentee window will disadvantage shut-ins, snow birds, domestic violence victims, the elderly, and many in rural areas,” Weiner said at the hearing.

Opponents of the law also worry about the effect the legislation will have on disabled Iowans. Members of the forum said the bill will affect how people can be helped and where ballot drop boxes are.

“We know that people with disabilities are voting more than ever, and we think that this bill should focus on accessible ways one can exercise their vote rather than limitations,” said Bill Kallestad, the Iowa Development Disability Council Public Policy Manager.

Emily Russell, a first-year law student at Drake University, spoke in favor of the bill during the public hearing. She said that instances of election misconduct are a very serious matter, which is why this bill would be effective in preventing such issues.

Debate over a fraudulent election has occurred since Nov. 3, 2020 when a record number of votes were cast using absentee and mail-in ballots. Claims of Iowans voting twice, both in person and through absentee, sparked debates. However, no evidence of voter fraud has been found in Iowa.

As previously reported by The Daily Iowan, three counties in Iowa faced legal action for pre populating absentee request forms. The auditors of those counties then invalidated the request forms and re-sent the proper forms to Iowans who may have used the pre populated ones.

Due to the mistakes made by the Iowa auditors who sent the incorrect forms, Russell said she hopes the bill would keep things uniform across the state and prevent future similar issues. She added that the divisiveness in the state and country caused by arguments over whether or not the election can be mended by this bill.

“We have been more divided than ever before which has been fueled by these instances of potential voter fraud. I do expect to see people regaining that confidence in our elections again with this bill and it will help strengthen confidence in the state,” Russell said.

While there was no evidence of voter fraud in the state, Iowans are divided by the issue. Weiner said that no laws were broken and no fraud was present.

“The remedy for the big lie of a stolen election is not to take an axe to election laws that work exceedingly well, it’s simply to tell the truth” Weiner said.

Deidre DeJear, 2018 Democratic candidate for Iowa Secretary of State and the Iowa campaign chair for now-Vice President Kamala Harris, said that Iowa has a long, rich history of standing up on behalf of all people and that this bill would push the state back.

The 1.7 million voters all across the state, DeJear said, were paramount in showing everyone what democracy is about.

“The first election in this country was limited to male, white homeowners and look at how far we’ve come,” DeJear said. “Let us not restrict democracy but allow democracy to simply exist. This bill does not do that.”

Rep. Mary Mascher, D-Iowa City, said that no Iowans have asked for these changes to Iowa’s voting laws and that the majority of the hearing testimonials were from people who opposed the bill. Kaufmann disagreed with this statement.

“The bill has been fast tracked and usually that occurs when a majority party decides that they want to push something through quickly without people being able to fully understand what’s actually in the bill.  I don’t even think the public really knows right now what is or isn’t in the bill,” Mascher said.

Kaufmann said Republicans believe that some auditors knowingly broke the law and that in the future they would need to face repercussion. Three weeks is how much time Iowans will have to vote absentee, and he said that is plenty of time.

“This is not about voter suppression and not a single vote will be suppressed. It is easy to vote absentee now and it will be after the bill goes into effect,” Kaufmann said.