After receiving new funding from the Environmental Protection Agency, the Ashton Research Prairie will add six acres this spring. 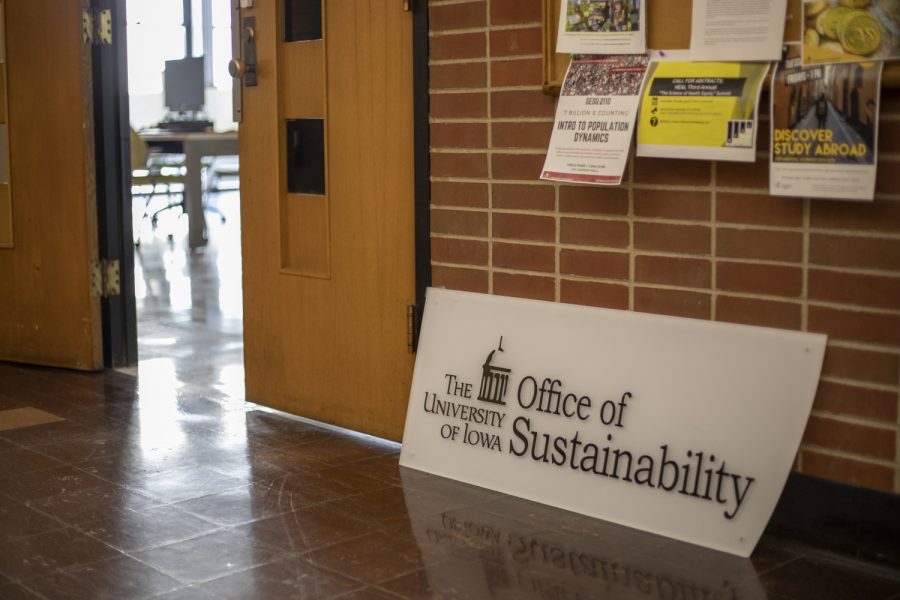 The sign for the Office of Sustainability sits outside its new location on Tuesday, Jan. 29, 2019. The office recently moved to communications building.

The Ashton Research Prairie will undergo a six-acre expansion this spring, with new funding from the Environmental Protection Agency.

Located on the Ashton Cross Country Course, the Ashton Research Prairie was originally created as a part of a larger effort to restore Iowa’s prairieland, which once thrived in the state.

Now, Iowa has less than 0.01 percent of its pre-1840 native Tallgrass Prairie.

University of Iowa Director of the Office of Sustainability and the Environment Stratis Giannakouros said the intention was always to expand the prairie after launching an initial test run planting on a smaller plot of land.

“In order for it to be a research-valuable parcel of land, it always had to be at least five acres,” Giannakouros said. “So that first little bit we started a year ago was really for us to test the physical planting.”

Giannakouros said the expansion, which will increase the size of the one-acre prairieland by five acres, will provide greater opportunity for the community to connect with the state’s native environment and for UI students to directly study wildlife.

Giannakouros said that, while the EPA is funding much of the project’s expansion, the UI Athletics Department has also played a vital role in making the plan a reality by providing additional funding and land for the prairie to be planted.

“When you have labor that’s out there mowing, or you know, putting down some weed killer, things like that cost money that athletics is just paying,” Giannakorous said. “The project wouldn’t work unless they were putting in time and effort.”

Brad Cramer, an associate professor in the UI Department of Earth and Environmental Sciences, said his department also recently got involved with the expansion, seeing the prairie as an opportunity to strengthen academic programs currently offered at the university.

“The question recently was, how can we turn the entire prairie project into a living laboratory for courses across campus?” Cramer said.

Cramer said the expansion of the prairieland will benefit many departments and programs throughout campus, including his own.

The Prairie Project Intern at the Office of Sustainability said she is excited about the academic opportunities the prairie will provide for students with less access to the rare resource.

Cramer added that he is hopeful about the new opportunities that the prairie expansion will create for students.

“Instead of talking about things in principle, we can actually have students go and do it for real, out on the prairie,” he said.

Megan Lenss, prairie projects intern, said the prairie also importantly provides the community with the chance to connect with a biologically diverse terrain that has virtually disappeared.

“It is incredible and unrecognized, and people don’t know what they’re missing because it’s been wiped out,” Lenss said. “We’re putting this in student and community spaces so that we can all interact with it, and I think that is amazing.”