The women’s swimming and diving program was reinstated on Feb. 15 after it was going to be discontinued following this season. 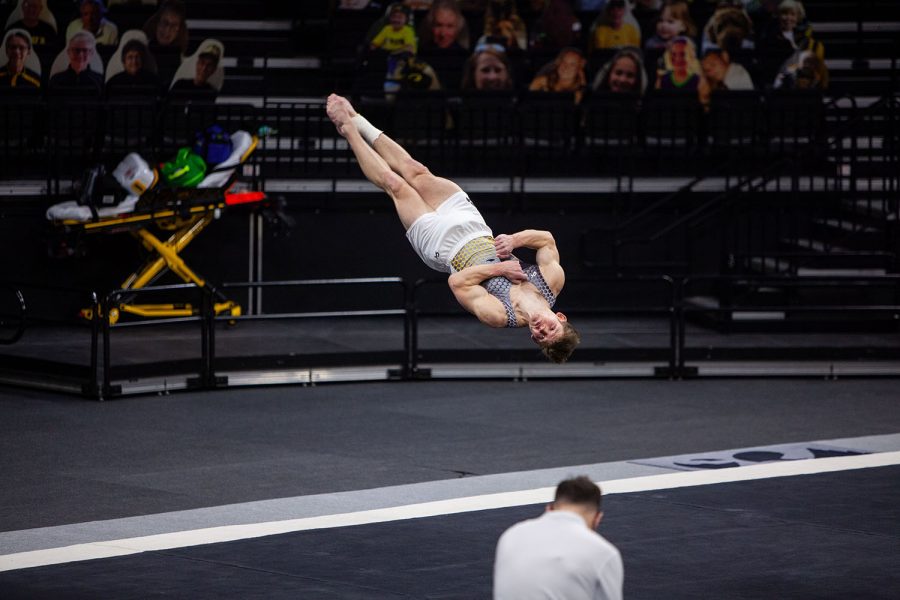 After the University of Iowa reinstated women’s swim and dive — one of four sports slated to be cut because of financial constraints — players of the other three permanently cut sports bristled at administrators for flip flopping what they’ve said was a set-in-stone plan for only one of the four sports.

UI President Bruce Harreld and Director of Athletics Gary Barta announced in an open letter on Aug. 21 the decision to discontinue four varsity sports — men’s and women’s swimming and diving, men’s tennis, and men’s gymnastics — after the 2020-21 academic year because of millions of dollars lost from COVID-19 pandemic’s pause on high-revenue sports during the spring and fall.

On Feb. 15, the university reinstated the women’s swimming and diving program following a legal battle between the UI and four members of the women’s swimming team, which alleged that cutting its team would make the UI non-compliant with Title IX. Title IX requires that opportunities be equitable relative to the student population.

The women’s swimmers’ Title IX complaint alleges that, in 2018-19, women made up 53.56 percent of the UI student body, but had only been provided with 50.77 percent of the athletic opportunities, as previously reported by The Daily Iowan.

A federal judge granted a preliminary injunction on Dec. 22, temporarily blocking the UI’s decision to cut women’s swimming and diving at the end of the 2020-21 academic year. Last week, the UI issued a statement that the department “continues to disagree with the claims made by the lawsuit” but reinstated the swim team for 2021-22 season while the lawsuit makes its way through the court system.

“In the interest of serving our student-athletes, coaches, and community, the University believes more certainty will be beneficial for the future of the program,” the UI’s statement said.

Men’s tennis player Jason Kerst wore a red shirt without the Hawkeye logo alongside the rest of his team at the first home match of the season. Players went without the black and gold to protest the UI.

Kerst added, however, that he’s happy for the women’s swimmers and divers.

While both Stewart Brown of men’s gymnastics and men’s swimmer Ryan Purdy shared Kerst’s opinion, Purdy thought the university reinstated the sport for the wrong reasons and that Barta is trying save himself.

Purdy noted that Barta’s Feb. 15 meeting with the women’s swimming and diving team at the UI pool was the first time he’d seen Barta at the pool this school year.

“A week before our women’s Big Ten [Championships], they’ve been focusing all year for this, our athletic director decides to walk into our pool, that he hasn’t shown his face to the whole entire season,” Purdy said in an interview with the DI. “He hasn’t spoken a word to us since we got cut, he just decides to walk in to reinstate our women’s team. Takes away two hours of their practice time a week in advance of the biggest meet of the season, blatant obliviousness to the situation.”

Brown, an All-American for the men’s gymnastics team, said that although he is happy for the reinstated athletes, he is unsettled by the circumstances surrounding the university’s decision.

“It’s upsetting to see that there are Title IX accusations,” Brown said in an interview with the DI. “But [the women’s swimming and diving team] is reinstated and [the athletics department] found the money, or whatever it may be, for them to stay around, but not for us.”

Barta said in a Feb. 16 teleconference that the university would be facing a deficit between $50 and $60 million next year.