Senate File 292, if passed into law, would direct the Iowa Board of Regents to survey regent university staff and submit anonymous results to state General Assembly. 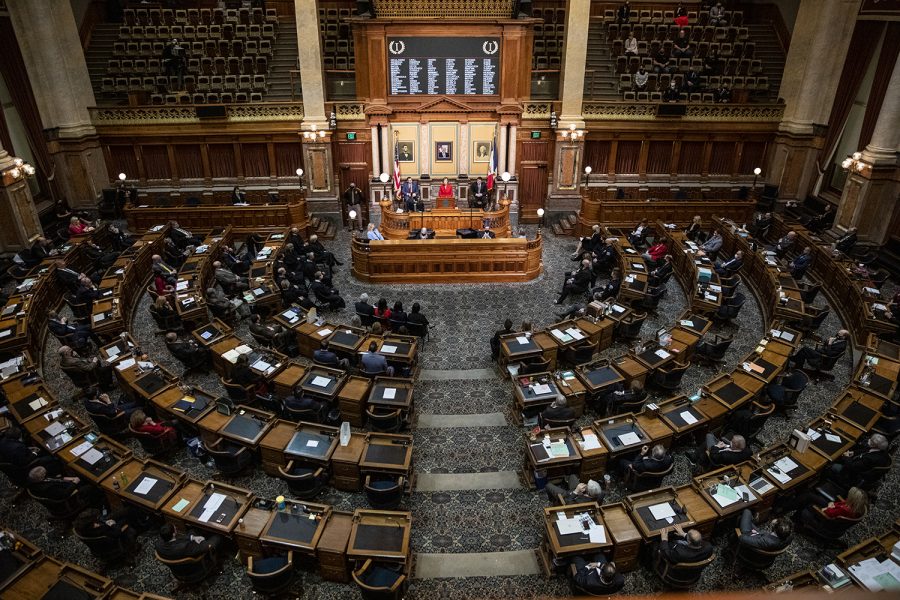 Gov. Kim Reynolds gives the State of the State address in the house chamber of the Iowa State Capitol on Tuesday, Jan. 12, 2021 in Des Moines. Gov. Reynolds highlighted in the address expansion of broadband internet, a push for in-person learning, and economic recovery from the COVID-19 pandemic.

State Sen. Jim Carlin, R-Sioux City, introduced a new bill to poll regent university employees on their political affiliations and submit the results to the General Assembly, but now says he wants to keep the bill in subcommittee until at least 2022 before continuing to advocate for it.

The bill, Senate File 292, says the survey would distinguish between job positions, but keep individual employee names private and would only be a one-time poll as opposed to an annual survey.

Currently the bill has not progressed past a Senate education subcommittee and likely won’t until Carlin promotes further action on it in upcoming years.

“The intent was to have an anonymous study to try to define the political composition or proportionality of our regents’ professors,” Carlin said. “I can’t think of a more important place to have freedom of expression than on a college campus because ideas are discussed, shared, and debated, and if you have a culture that discourages debate, or worse yet, silences it, you’re attempting to define the people that attend your university.”

Carlin said there are many college students who believe they can’t speak freely, and are concerned about making sure they behave in a way that ensures they have the opportunity to get good grades and put themselves in a good position for graduate school or employment.

He said he was holding off on advocating for the bill until the plausibility of the bill passing was less questionable and he had time to workshop the phrasing of the legislation.

“I don’t believe in wasting time,” Carlin said. “I don’t want to waste the time of the staff that works as hard as they do for me and for my entire Senate caucus. So rather than take up their time needlessly to try to make some political points, I just decided I’m going to run a subcommittee on this until I have framed it in a meaningful way that’s not going to offend people’s sensibilities still try to define in some measure what the political proportionality of regents professors are.”

State Sen. Claire Celsi, D-West Des Moines, said the bill reminded her of McCarthyism, a 1950’s campaign on behalf of U.S. Sen. Joseph McCarthy, R-Wisconsin, to root out government employees who allegedly subscribed to the ideology of communism.

She said she doesn’t think the bill has any chance of passing and that the premise of the bill’s inception, the notion that liberal university professors are indoctrinating students under their political beliefs, is “patently false.”

She said the bill is only going to encourage people to register as a no-party voter and will subsequently make the information they receive from the survey irrelevant.

“I think it’s unconstitutional to do this, and illegal,” Celsi said. “I don’t think Senator Carlin really consults the constitution, or common sense before he makes these bills.”

Celsi said there’s already diversity of thought among Iowa’s universities and that students don’t often spend much time talking with their professors about subjects aside from class topics.

“It really doesn’t matter what political affiliation their professor is,” Celsi said. “People from different backgrounds are all thrown in together at a university to learn and they actually learn from each other quite a bit, so the learning goes both ways and people meet people who are not like them and that’s really what the college experience is all about.”

In addition to SF 292, the Iowa House of Representatives is reviewing other legislation related to regulating education. Among them include House File 153 to appoint a public policy director at regent universities and House File 415 requiring all public school districts and some nonpublic school districts to give the pledge of allegiance to all K-12 students every school day. The latter bill passed the House on Feb. 17 with a 91 to 3 vote and the former was recommended to pass out of subcommittee on Feb. 16.