Iowa’s men’s team will host Penn State at Carver-Hawkeye Arena while the women’s squad travels to Nebraska for a matchup with the Cornhuskers. 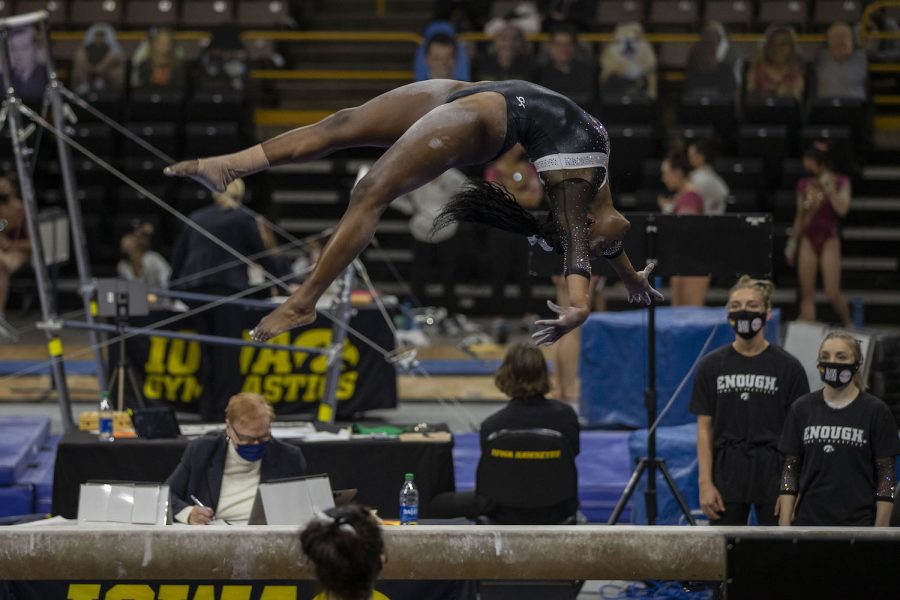 Iowa's all-around JerQuavia Henderson practices on the beam before the competition round during a women's gymnastics meet between Iowa, Minnesota, and Maryland on Saturday, Feb. 13, 2021 at Carver Hawkeye Arena. The Hawkeyes came in second with a score of 196.775 after the Gophers won with 196.975 and Maryland lost with 195.350. Henderson went on to receive a score of 9.875. (Hannah Kinson/The Daily Iowan)

The Iowa men’s and women’s gymnastics teams return to action this weekend, with the No. 6 men hosting No. 5 Penn State at Carver-Hawkeye Arena Saturday at 6 p.m. The seventh-ranked women are making the trek to Lincoln, Nebraska, to face the 39th-rated Cornhuskers on Saturday at 7 p.m.

The men — who will be participating in their third competition since learning about the end of their program — are looking to keep their momentum going after winning their first two competitions.

Senior Bennet Huang wants his team to keep the same tenacity throughout the entire competition and limit the mistakes, something he says they lost halfway through their win against Illinois.

“One of our letdowns from this past weekend was that we felt like we lost a little bit of focus and fire midway through the competition,” Huang said. “That got us into a close competition. On a more specific level, gymnastics-wise, we are trying to really limit our deductions.”

With their matchup scheduled for last year canceled because of COVID-19, the Hawkeyes enter Saturday’s matchup with Penn State having not faced the Nittany Lions head-to-head since the 2016-17 season.

Competing against the Hawkeyes isn’t the remedy Penn State needs after a loss, as Iowa will challenge the Nittany Lions in multiple phases.

The Hawkeyes are nationally ranked in six individual events. They rank third on rings and parallel bars, fourth on high bar, sixth on floor and vault, and eighth on pommel horse.

Four Hawkeye men’s gymnasts have also excelled in all-around this season. Both junior Evan Davis and Huang are ranked top 10 nationally. Huang is No. 7 with an 80.600 average, and Davis is ranked 10th with a 79.850 average. Sophomore Carter Tope has averaged a 77.700 score, ranking him 13th, and junior Stewart Brown posted 77.400 average, good enough for 15th.

According to head coach JD Reive, some of Iowa’s top gymnasts are motivated to perform at a high level by the program’s impending discontinuation.

“We’re all aware that this is the final season, and so there is a lot of weight that gets put on, but there’s also some that comes off,” Reive said. “My job with the guys has been talking about it and then drilling back down to what’s in front of us right now that we can control, and that’s practicing for the competition. We’re trying to keep them understanding, ‘Hey, if you need that motivational push, you can draw it from the fact that you’re not going to do this again. At the same time, we don’t want that to overwhelm them.”

Like their counterparts on the men’s team, the Iowa women’s gymnastics team will be facing a squad they are unfamiliar with.

The last time Iowa and Nebraska met head-to-head was at Carver-Hawkeye Arena in 2017-18.

This season, the GymHawks have established themselves as one the nation’s best teams at 4-1 overall and 4-0 in the Big Ten.

The Cornhuskers on the other hand, are an abysmal 1-5 overall and 1-4 in Big Ten competition.

Iowa has performed well in every event this season, but none more so than floor. The GymHawks floor average of 49.400 makes them the No. 1 team in the nation in that event. In their last matchup with Maryland, the Hawkeyes set a new program record with a score of 49.600.

Senior Clair Kaji boasts a 9.905 average floor score, ranking her third in the Big Ten and 13th nationally. Sophomore JerQuavia Henderson scored a career-best and tied a school record on floor with a 9.975 in Iowa’s tri-meet last weekend against Minnesota and Maryland. Junior Lauren Guerin has been consistent all season long. She posted a 9.950 for the second consecutive week and the third time this season in the matchup against Minnesota and Maryland.

On balance beam, the GymHawks are ranked first in the Big Ten and sixth nationally. The Hawkeyes are also rated 16th in the country on vault and 17th on bars.

Henderson is the only Hawkeye that’s competed in all-around this year. She currently has a 39.275 average, which places her seventh in the Big Ten and No. 23 nationally.

The accolades have continued to pile up for the GymHawks this season. Iowa has earned six Big Ten weekly honors throughout the first four weeks of competition. Guerin, Kaji, and freshman Adeline Kenlin have all won multiple awards.  The program record for Big Ten weekly awards was set in 2004 at seven.

While the GymHawks have consistently scored over 196 this season, even when they haven’t performed their best, they don’t want to stop there.

“There’s a lot of mixed emotions, and we’re striving for that 197 score, and we know we can do it this year,” senior Clair Kaji said. “To know we can score that high and not put up our best performance makes us feel like we have more to give. To know that we have so much more potential is pretty amazing.”