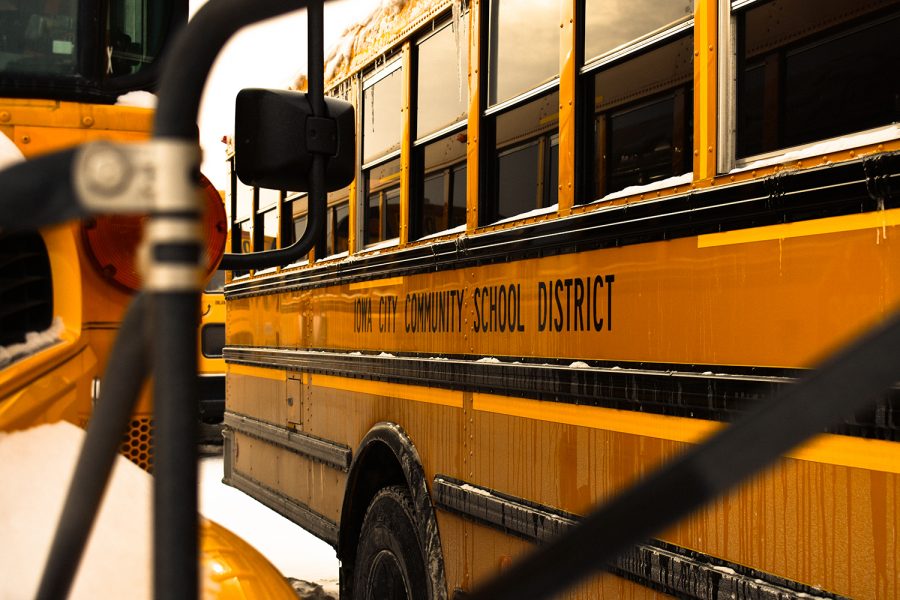 Teamsters 238, a union representing bus drivers in the Iowa City Community School District, is asking parents with the option to drive their children to school to eliminate bus crowding.

The press release followed the state’s requirement for schools to offer a 100 percent on-site learning option.

“The district has laid out a recommendation for a 41-person maximum on a bus,” Ramsey said. “If I were to put 41 kids in the size of an average conference room, that’d be way too many kids to have in there. Well, buses are about half the size of a conference room.”

Ramsey added that school buses are currently holding 30 to 40 percent of the students that would typically be allowed on a bus, but that number will likely increase with the introduction to 100 percent in-person schooling on Monday.

“There are parents who require school buses to take their kids to school. I get that, and that’s what we’re here for. We won’t turn anyone away,” he said. “But as a bus driver, we are primarily concerned with safety. Right now, the safest thing we can do for the kids is recommend they don’t get on the bus if their parents have another way to get them to school.”

Teamster 238 Member and Iowa City School Bus Driver Kasey Jurgensen said she doubles up on face masks and sanitizes the entire bus by herself after completing a route.

“I’m on my own little island compared to most, but I worry about my co-workers, the mothers with children, and the old drivers with all these kids on the bus,” she said.

Jurgensen and her husband both fall into an especially vulnerable age group for developing severe COVID-19 symptoms.

Secretary Treasurer of Teamsters Local 238 Jesse Case said the safety of both the passengers and drivers on school buses motivated the union’s recommendation.

“There’s a considerable amount of retirees and people who are in their 60s who are driving school buses,” Case said. “That’s one reason we’re trying to encourage parents who have access to alternative modes of transportation to use them.”

Ramsey said at least a third of school-bus drivers in the district are 65 years or older.

“The buses are going to be packed full of kids, and we are at the vulnerability of the least prepared kid or parent; it’s the one kid that doesn’t wear their mask, the one parent that sends their kid to school sick,” Ramsey said.

Although Jurgensen thinks COVID-19 has changed the passenger experience, she said bus drivers still play an important role in helping students start their days off on a good note.

“I’ve driven a school bus for a very long time,” she said. “I have taken whole families to school. Every person I’ve ever driven knows me and remembers me, and I don’t think that will change.”

Ramsey said that a bus driver can set a precedent for every passenger’s school day, even during the pandemic.

“Bus drivers are the first people that kids see in the morning, and they’re the last person from the school district that they see in the afternoon,” he said. “There are kids that live in Iowa City that don’t really have a consistent adult in their life, and we get to be one of the few consistent adults they get to see day in and day out.”