COGS frustrated after not being able to elect presidential search representative

The Campaign to Organize to Graduate Students did not elect its representative to the University of Iowa’s Presidential Search Committee – something that frustrates the union. 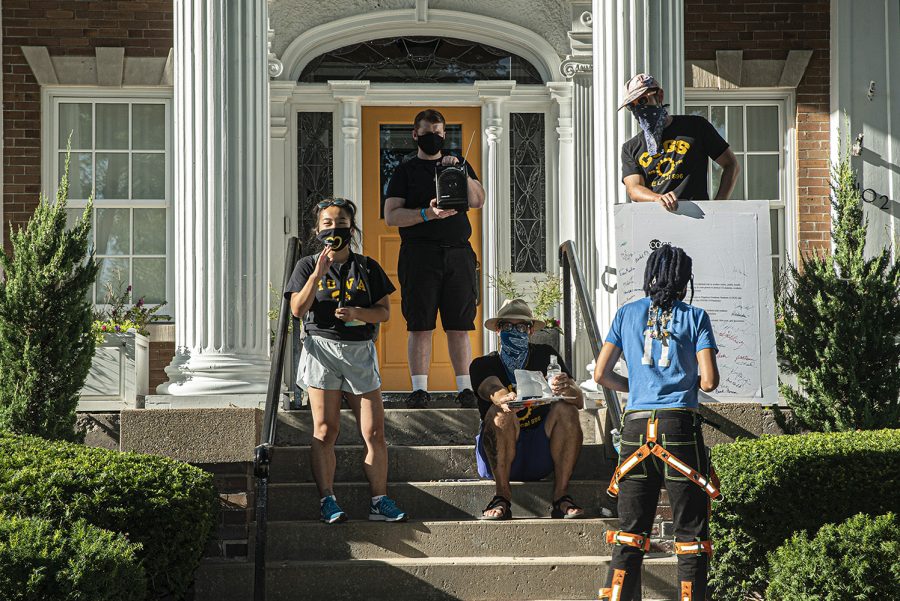 University of Iowa senior Jade Miller speaks at a demonstration held in front of University President Bruce Harreld's home on Wednesday, Aug. 19, 2020. The Campaign to Organize Graduate Students (COGS) led a march to Harreld's home in order to protest the administration's insistence that the university remain open despite the health risk posed by COVID-19.

When Michael Goldberg heard the Campaign to Organize Graduate Students did not have a democratically elected representative on the University of Iowa’s Presidential Search Committee, he said he was frustrated, but not surprised.

Goldberg, the COGS Labor Solidarity Committee Chair of the union, said this news was yet another example of the university overlooking graduate student workers.

“Graduate employees are a vital part of this community,” he said. “The university works because we work … It’s hard enough to exist in graduate school and when your employer doesn’t look at us in a way that respects our work and doesn’t value our voices, it adds to the stress.”

During the announcement of the search committee, COGS was in the middle of its recertification vote and was unaware of the process of having a representative on the committee, he said.

When Goldberg reached out to the committee to ask if there was anything the union could do to add a representative to the council, he said he was told that COGS missed the deadline.

Co-chair of the UI Presidential Search Committee and Dean of the Graduate College John Keller wrote in an email to*The Daily Iowan* that he spoke with representatives of COGS following the union’s concerns of representation and explained that many people on the committee have multiple representation positions.

“I explained that John Piegors was serving in this type of role and was doing a wonderful job representing the graduate student base at large, as well as issues from COGs,” Keller wrote. “They then reached out to John and endorsed him as their rep to the committee. From my conversations with John, he has met with them to affirm and represent their interests as the search unfolds.”

Piegors, president of the Graduate Student Senate and a member of COGS, is on the UI Presidential Search Committee and serves as the representative of the union. In an email to the *DI*, he wrote that he is meeting with graduate students from both the student senate and COGS to discuss what they want to see in the future university president.

Piegors was formally endorsed by COGS a few months after the committee was announced in November, he wrote. Since the endorsement, Piegors wrote, he has been regularly meeting with a COGS committee to discuss what the union wants to see in the next head Hawkeye alongside his meetings with other graduate students.

Though Goldberg wishes COGS could have selected its delegate to the committee democratically, he said he is thankful that Piegors is willing to meet with the union and uplift its members’ voices when it comes to finding the next UI president.

“It’s a little frustrating from our perspective that we were told who is representing us rather than being able to choose the representation for ourselves,” he said. “COGS is a democratically oriented union, and we believe that our members run our union and deserve to designate who speaks for them in important matters like this.”

While the union was quick to recognize Piegors as its representative on the council, Goldberg said it puts Piegors in the difficult position of being doubly tasked.

In an email to the *DI*, state Board of Regents’ Communications Director Josh Lehman wrote that he did not know if previous searches had a COGS representative, but that graduate students at large have been on past committees.

“The search committee co-chairs engaged with various shared governance groups, including student government leaders, as the search committee was being put together,” he wrote. “Piegors was specifically chosen to be a representative for both groups.”

When Bruce Harreld was selected as the UI president in 2015, there was one graduate student on the committee and no union representatives in any capacity.

There are representatives from the other two university unions on the 2021 UI Presidential Search Committee as well. SEIU 199, the UI Hospitals and Clinics union, and AFSCME Local 12, the union for UI merit staff, each have a representative on the committee.

SEIU 199 President Cathy Glasson said this is the union’s first time sitting on a committee that impacts the entire university.

She said she’s glad there are spots on the committee for union workers because they represent many workers at the university.

“The University of Iowa employs thousands of people, so it’s important that the voices of workers are involved in the decision-making process,” she said. “We’re a state institution with a lot of different interests and the search committee should reflect that. It’s important to have different organizations, including unions, represented at the table when you have a committee of this level, vetting candidates.”