However, the discontinuation of the Hawkeye men's swimming and diving, men's tennis, and men's gymnastics programs remain final. 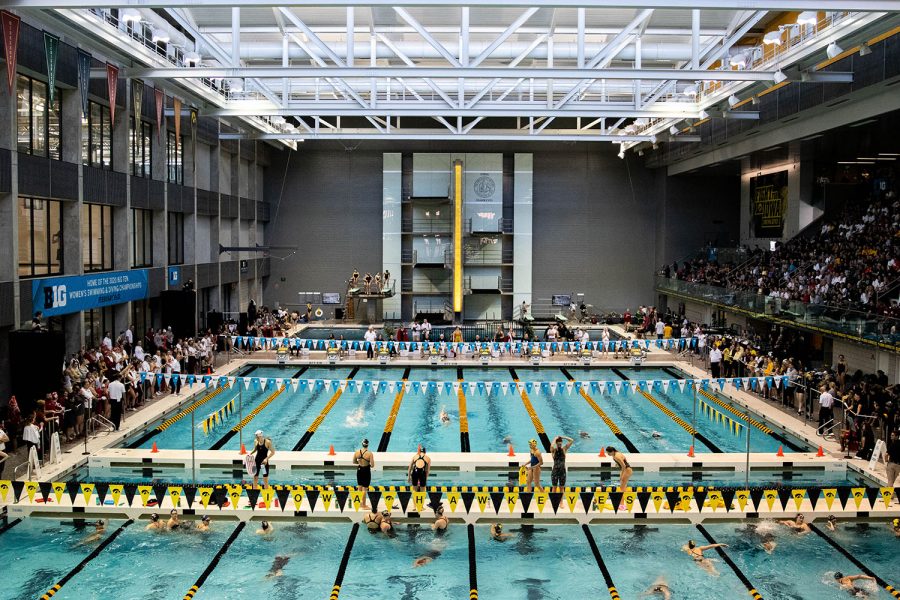 The University of Iowa announced Monday that it is fully reinstating its women’s swimming and diving program as an NCAA and Big Ten Conference program.

Members of the Iowa women’s swimming and diving program had previously filed a Title IX complaint against the UI after its decision to cut the program.

“The University continues to disagree with claims made by the lawsuit, and the subsequent preliminary injunction to continue offering the sport in 2021-22 while the lawsuit makes its way through the court system,” the UI said in a prepared statement Wednesday. “In the interest of serving our student-athletes, coaches, and community, the University believes more certainty will be beneficial for the future of the program.

“Accordingly, the University has decided it is in the best interests of the student-athletes, coaches, and the athletics department to voluntarily reinstate the program, regardless of any outcome related to the lawsuit.”

!!!! The University of Iowa announced today that it is fully reinstating women’s swimming and diving as an NCAA and Big Ten Conference program. We are still working hard for our other sports. But excited for women’s @IowaSwimDive 🖤💛🖤 #reinstated

Marc Long, who is in his 16th season leading both the Iowa men’s and women’s swimming and diving programs, is expected to remain head coach of the women’s team, per a report by Swimming World Magazine.

Iowa Athletics Director Gary Barta and President Bruce Harreld announced Aug. 21 that the UI was discontinuing the four mentioned programs at the end of the 2020-21 academic year. They cited financial shortfalls in the athletic department brought on by the pandemic and the Big Ten’s decision to postpone all fall sports, which at the time included football, to the spring. Barta claimed the UI was compliant with Title IX guidelines when making its sports cuts.

On Sept. 25, swimming seniors Sage Ohlensehlen and Kelsey Drake, sophomore Christina Kaufman, and freshman Alex Puccini filed a Title IX complaint against the UI, alleging that “The University of Iowa’s actions have caused harm to the plaintiffs, and those who are similarly situated, and constitute intentional, prohibited discrimination based on sex in violation of Title IX of the education amendments of 1972. . .”

Title IX of the education amendments of 1972 does not mandate that there be an equal number of men’s and women’s sports programs. Rather, that the opportunities be equitable relative to the student population.

The women’s swimmers’ Title IX complaint alleges that, in 2018-19, women made up 53.56 percent of the UI student body, but had only been provided with 50.77 percent of the athletic opportunities.

On Dec. 22 a federal judge granted a preliminary injunction, temporarily blocking the UI’s decision to cut women’s swimming and diving at the end of the 2020-21 academic year.

Cutting these four programs would save the athletic department “north of $5 million” annually, Barta said in August after announcing the sports cuts.

Initially, Barta said that the athletic department was anticipating $96.9 million in lost revenue and an overall deficit of between $74.7 million this fiscal year. But after the Big Ten reinstated the fall football season, that deficit figure dropped to $50-60 million.

Despite the return of a football season, which was announced on Sept. 16, and the financial gains that come with it, Barta said that the sports cuts would remain final.

Alumni and supporters of the four cut sports created the Save Iowa Sports group, which to date has raised over $2.9 million in an effort to reinstate the sports.

Barta called the fundraising effort “admirable” in September, but said the department would need “20-to-30 times more” than what was raised — at the time $1.65 million — to bring back and support the four programs.

Iowa is not alone in overturning recent sports cuts.

In January, Dartmouth reinstated five varsity sports programs it cut in January after the threat of a Title IX complaint. William & Mary also reversed course in November, reversing an earlier decision to cut three men’s sports. The school said it will support the programs through at least the 2021-22 academic year while developing a financial plan to keep them sustainable.

The UI’s decision to discontinue three men’s sports remains in place, but Barta said in a release the athletic department remains committed to honoring scholarships if they choose to remain at Iowa.

Barta will hold a Zoom conference Tuesday at 1 p.m.

This is a developing story. Check back with dailyiowan.com for more information.