Iowa Republicans hope to make young people “patriotic citizens” with a bill that would restrict Iowa schools from teaching the 1619 Project. 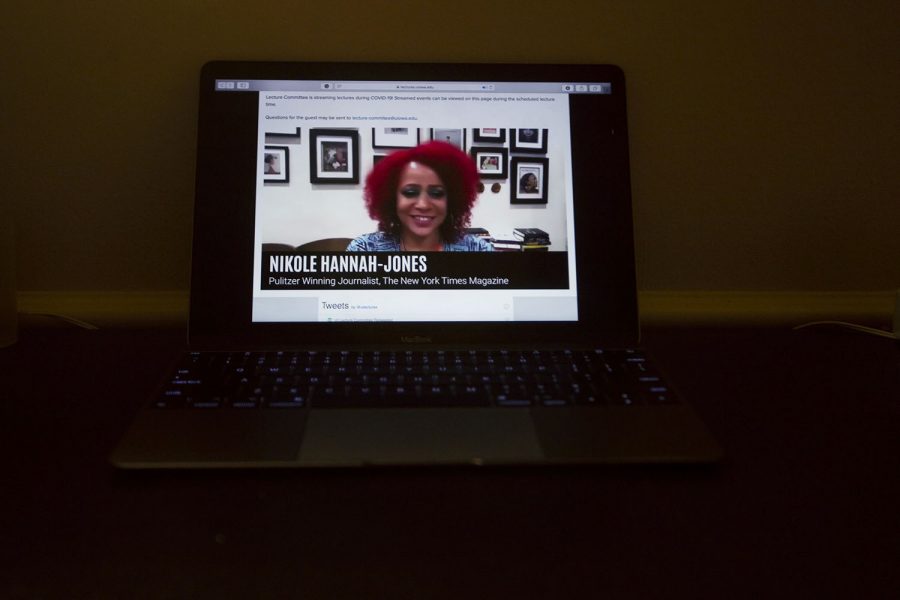 Nikole Hannah-Jones speaking with the university lecture committee in a virtual setting on Tuesday, Sept 22, 2020. Nikole spoke on her 1619 project about the continuing history of American slavery.

A bill currently in the Iowa Legislature could reduce funding to K-12 schools and colleges that use a history curriculum modeled off of Pulitzer Prize-winning journalist Nikole Hannah-Jones’ 1619 Project.

Hannah-Jones, creator of the New York Times’ 1619 Project, grew up in Waterloo and attended Waterloo West High School. This bill, House File 222, comes as Republicans in the Legislature are also maintaining that Iowa’s public universities stifle conservative voices on campus.

The 1619 Project reframes U.S. history to acknowledge the roles slavery, systemic racism, and white nationalism have played in society. The Pulitzer Center partnered with the project to create lesson plans for educators, and several state legislatures — Arkansas, Mississippi, Missouri, South Dakota, and Iowa — are considering legislation to ban the education materials.

The bill in Iowa asserts that the 1619 Project attempts to deny fundamental principles the U.S. was founded upon, stating that the Legislature’s goal is to form young people into “patriotic citizens.” The bill would ban schools from using U.S. history curriculum that in part or in whole was derived from the project.

Noncompliant school districts would be penalized with a reduction of the district’s budget for each day they use curriculum in violation of the bill. Community colleges and Iowa’s three public universities would also face financial penalties.

The 1619 Project was published in August 2019 on the 400th anniversary of when the first ship of enslaved Africans arrived in the British colonies. Jake Silverstein, the project’s editor, wrote that the arrival of chattel slavery planted the seeds of America’s economy, industrial power, electoral system, inequalities in health and education, income inequality, and the example the country set for the world, among other things. The project, according to The New York Times Magazine website, reframes the national historical narrative around the consequences of slavery and contribution of Black Americans.

During his time as president, Donald Trump criticized critical race theory and the 1619 Project, launching his own “1776 Commission” to promote “patriotic” education. Trump won Iowa in both 2016 and 2020 by comfortable margins.

The day the bill was introduced in the Iowa Legislature, Hannah-Jones voiced her disappointment in the legislative action on Twitter.

“Iowa public schools are what gave me my start in journalism in high school, where I took the Black studies course that taught me the year 1619,” she wrote. “That a bill now exists seeking to censor my 1619 work from other Iowa public school students is shocking [and] sad.”

Wheeler told The Daily Iowan that he first heard about the project from a June 2020 New York Post opinion piece that said the Black Lives Matter protests from last summer should be called the 1619 riots.

Hannah-Jones responded on Twitter saying that would be an honor. Wheeler said that prompted him to look into the project.

“After reading through the project it became clear to me that this is very political by nature,” he said. “It’s not historical. It distorts not only our history but also any ability to unify the nation.”

Wheeler said the project advocates for liberal policies like universal health care, minimum-wage increases, and those against drug testing of employees and voter-identification laws.

Some members of the public at the subcommittee meeting voiced similar concerns as Wheeler, describing the project’s ideas as “Marxist” and “socialist” because of the critiques of capitalism and policy suggestions. Others, however, defended the value of the perspectives the project presents to teaching of American history.

“We think that’s a very dangerous precedent,” Piper said. “We have locally elected school board members who are the ones that are responsible for making those decisions and we encourage those decisions to be left there.”

Rep. Ras Smith, D-Waterloo, told The Daily Iowan he was disappointed to hear some supporters of the bill share comments he felt were contradictory, such as people saying both sides of history should be heard while demanding the lens provided by the 1619 Project not be presented.

“It seemed that this is more of a political thing than actually caring about the education opportunities for students,” Smith said.

While the bill’s language says the 1619 Project denies the country’s fundamental principles, Smith says there is a difference between American ideals and how those things are put into practice. Smith said people can discuss the accomplishments of the founding fathers, while also acknowledging that some of them owned slaves.