In a 57-43 vote, the U.S. Senate found former President Donald Trump not guilty of inciting an insurrection, with Sens. Chuck Grassley and Joni Ernst, R-Iowa, joining most Republicans in a vote to acquit. 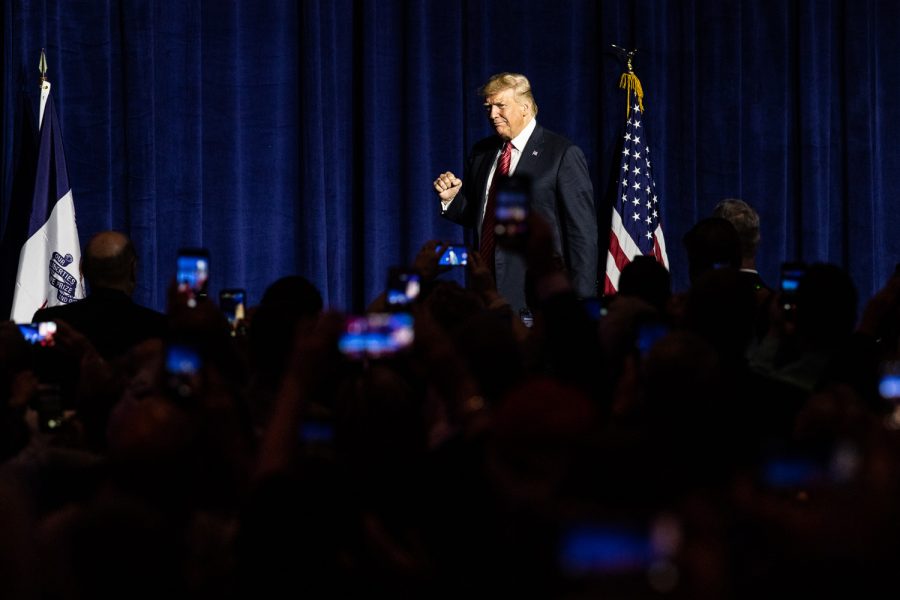 President Donald Trump walks to the podium during the Iowa GOP’s America First Dinner at the Ron Pearson Center in West Des Moines on Tuesday, June 11, 2019.

The U.S. Senate voted to acquit Donald Trump in his second impeachment trial on Saturday, with seven Republicans joining Democrats to convict.

At 57-43, the vote was the most bipartisan vote in favor of conviction in history, but fell short of the 67 votes needed for the Senate to find Trump guilty of inciting an insurrection.

Sens. Richard Burr of North Carolina, Bill Cassidy of Louisiana, Susan Collins of Maine, Lisa Murkowski of Alaska, Mitt Romney of Utah, Ben Sasse of Nebraska and Pat Toomey of Pennsylvania, were the seven Republicans that joined the Democrats in voting for conviction.

Throughout the five-day trial, House impeachment managers sought to prove that Trump had incited the insurrection on Jan. 6, in which rioters stormed the U.S. Capitol and blocked the counting of electoral votes, leaving five dead.

Democrats argued Trump had compelled his supporters to violence by waging a monthslong campaign to overturn the results of the 2020 election, which he lost. Trump claimed, without evidence, that President Joe Biden’s victory was due to massive voter fraud.

House managers also argued that Trump’s years of violent rhetoric and failure to condemn violence had laid the groundwork for the insurrection on Jan. 6.

Trump’s defense lawyers argued the former president’s speech on Jan. 6 was standard political rhetoric, protected by the First Amendment, and was not an incitement of violence. The lawyers played several clips of Democrats using the word “fight” in speeches, arguing Democrats use the same charged rhetoric as Trump.

Both Grassley and Ernst also voted against calling witnesses during the trial Saturday morning.

The surprise success of a vote to call witnesses Saturday morning was quickly reversed when prosecution and Trump’s lawyers reached an agreement to avoid calling witnesses, which would have prolonged the trial several days.

In a prepared statement for the Senate record, Grassley reiterated that he did not think the Constitution gives the senate the authority to try someone who is no longer the sitting president. The Senate voted 57-43 on Tuesday that the trial was constitutional.

He also said Trump’s rhetoric and his speech on Jan. 6 did not reach the level of incitement, saying the House managers failed to successfully make the case to convict Trump.

“We do not have the authority to try a private citizen like former President Trump,” he wrote in the statement. “Even if we did, he should have been accorded the protections of due process of law in his trial. And even if we assume he has been, the House Managers still did not prove that he committed incitement to insurrection, the specific crime of which he stands accused. This does not excuse President Trump’s conduct on and around January 6th of this year. It satisfies my oath as a U.S. Senator in this court of impeachment. I therefore voted to acquit.”

In a press release on Saturday, Ernst said her vote was motivated by her belief that the trial was unconstitutional. Her statement did not make reference to whether she thinks Trump was guilty of incitement.

“I’ve said throughout this process my concern is with the constitutionality of these proceedings,” Ernst wrote. “The Constitution clearly states that impeachment is for removing a president from office. The bottom line for this impeachment trial: Donald Trump is no longer in office, he is a private citizen. I strongly believe Congress should not be in the business of treating impeachment as a political tool to enact partisan revenge, and if it were to do so, Congress would set a very dangerous precedent, one that is inconsistent with the Constitution I swear an oath to.”

Editor’s Note: This article was updated to include statements from Sens. Chuck Grassley and Joni Ernst, R-Iowa.