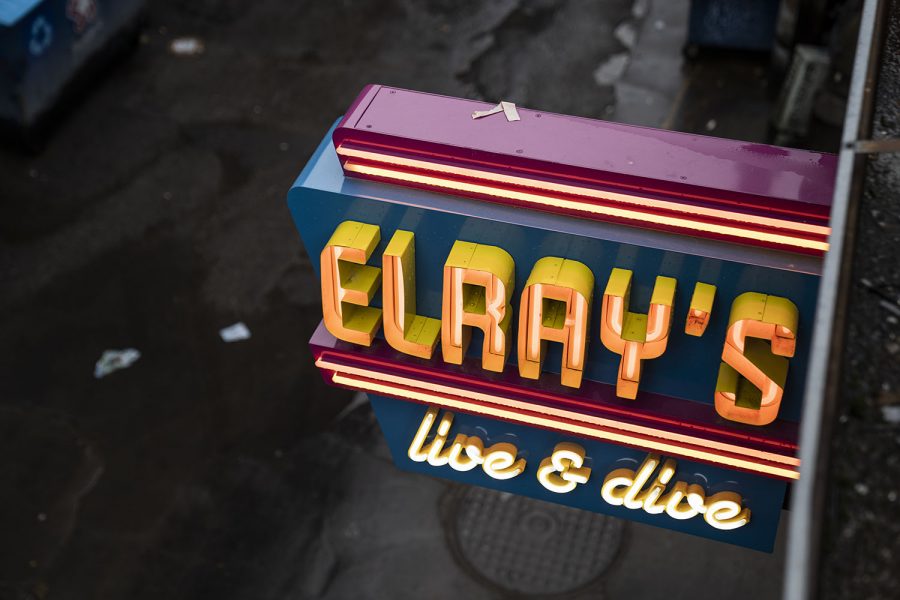 A shot of Elray's Live and Dive neon sign taken from the roof of said establishment in Iowa City on Tuesday, Nov. 10, 2020. (Matthew Hsieh/The Daily Iowan)

On Friday night at Elray’s Live and Dive, Kevin Burt took to the stage to play a collection of covers and original blues songs. Though the temperature outside had dipped into the negatives, Elray’s was filled with warmth; kindled by the rich blues melodies radiating from Burt’s guitar and the heart from which he sang them. From start to finish, Burt sang every note like it was the last time he would sing it.

The singer had placed himself on a stool at center stage a little after 7:30 p.m., opening his set with a cover of, “I Can See Clearly Now,” by Johnny Nash.

“I’m gonna play a little blues for the not so blue,” he told the audience. “Hopefully I can make you smile tonight with the music.”

With his guitar sat on his lap and harmonica strapped around his neck, audience members lounged back in their seats, took sips of their cocktails, and glued their eyes to the man on the stage.

The song, all about a bright (bright, bright) sunshine-y day, served as a compelling distraction from the biting cold outside. Burt followed the tune with “Come See About Me,” an upbeat original song about unrequited love.

Burt played and sang with a power that reverberated through the bar and seemed to penetrate the souls of those who listened, serving to uplift and replenish people who needed it.

Throughout the performance, Burt’s songs varied in tone. After playing a resentful breakup song entitled, “I Don’t Wanna See You No More,” he followed it with a sweet love song dedicated to his two daughters, now 22 and 18, that he’d written when they were just four years and 18 months old. Burt prefaced the song by talking to the crowd about his daughters.

“It’s a remarkably cool and frightening feeling when your kids become the young people that you hoped they would be,” Burt said. “They can understand being considerate of other folks, being compassionate enough to care, being honest enough with themselves to know that they’re not perfect, and laugh at themselves when they do foolish stuff ‘cause they’re kids and they do stupid things.”

The room, all the while illuminated by the whirling blue orbs of the disco ball above them, remained captivated. Burt’s easygoing and humorous nature was contagious. Between songs he cracked jokes and shared anecdotes about his wife, his family, and the nature of blues music.

Paige Levich, member of the audience and first time Kevin Burt concert attendee, said she didn’t have high expectations going into the night, but by the time it was over, she considered it the best live performance she had seen thus far.

“Kevin Burt – I noticed watching him that he was so into the music regardless of what was going on around the bar that it just kind of captured anyone who was there listening,” Levich said. “And the way that he played the guitar and the harmonica and the way that he sang just made the whole performance thing look so effortless and easy. But I mean, it was astonishing how great it sounded. I mean everything he sang sounded like it was pre-recorded, it was that good.”

Burt ended the night with a Doobie Brothers song, “Long Train Runnin,” a song in which the lyrics repeatedly ask, “Without love, where would you be now?” By this point, the Friday crowd had grown and people stood around and talked to one another while they listened to Burt. At the climactic end of “Long Train Runnin,” all attention was on Burt as he played his final instrumental and left the audience with a final word.

“I want to encourage you to love yourself and other folks, it’ll make your life easier,” he said.