Contrary to beliefs held by conservative policymakers, the evidence shows that charter schools do not close the achievement gap but rather exacerbate inequality 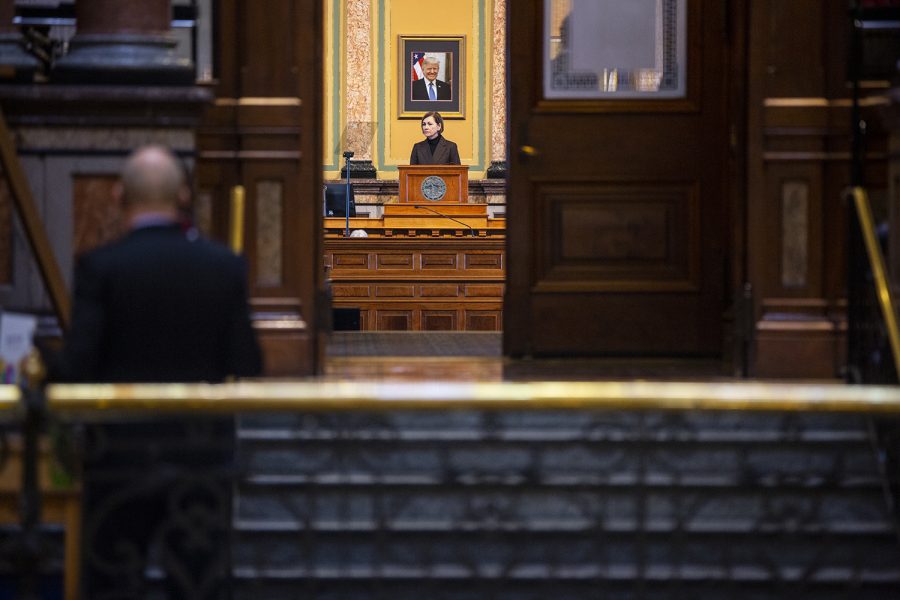 Gov. Kim Reynolds prepares for the State of the State Address within the house chambers of the Iowa State Capitol Building on Tuesday, Jan. 12, 2021 in Des Moines. Tuesday marks the second day of the 2021 Iowa legislative session, in which Gov. Reynolds will give her address in the evening.

Iowa should not endorse charter schools because they exacerbate racial inequality.

Charter-school mania has arrived in Iowa as Gov. Kim Reynolds and Iowa Republicans are pushing for a bill that would establish a charter school program and rescue “kids trapped in failing public schools.”

Well, I hate to be the bearer of bad news, but it has already been found in Michigan that charter schools lower student achievement and widen the education gap between white and Black students

Proponents of charter schools argue that they will increase education standards, leading to higher student performance across the board. However, it has been proven that this is not the case.

Michigan became one of the 10 worst performing states for education, and reading and math test scores dropped dramatically after switching from a public-to-charter-school system.

In addition, these charter schools were found to have increased the financial burden of education on low-income African American communities like Detroit, Flint, and Highland Park. This made it harder for Black children to receive an education comparable to their white peers.

What Michigan provides is a cautionary tale about how, rather than increasing access to quality education, charter schools put monetary pressure on Black communities, lower test scores, and gut school systems.

The cornerstone of conservative education and civil-rights policy has been this idea that charter schools are the answer to helping close the achievement gap between white and Black students. This simply is not the case, as rather than closing the gap, charter schools end up widening it, as shown by the failed experiment in Michigan.

Given the current state of Michigan’s schools, it would be irresponsible for Iowa to adopt a charter system.

Charter schools across the nation have high rates of discrimination against African Americans.

When it comes to punishment, charter schools have been known to use excessive disciplinary measures against Black students versus white students.

An analysis by the Center for Civil Rights Remedies found that, compared to public schools, charter schools have higher suspension rates — including rates higher than 70 percent. Black students were also four times more likely to be suspended than white students.

This ridiculously disproportionate use of suspensions proves that charter schools have become a structural barrier that Black children have to overcome in order to maintain pace with their peers.

The National Education Association finds that suspension is the number-one indicator of whether children will end up becoming unemployed, enrolled in welfare programs, or imprisoned as adults. Charter schools are reinforcing the systemic racism that leaves African Americans destitute.

In her Condition of the State speech, Reynolds made a point about committing to racial justice.

If she truly meant this, she should immediately withdraw her support for the bill as charter schools serve as another hurdle to keep Black people from advancing up the socio-economic ladder and achieving the American Dream.