In November 2020, the Iowa dance team finally got the all clear to begin practicing again, and now they are gearing up to compete at nationals in April. 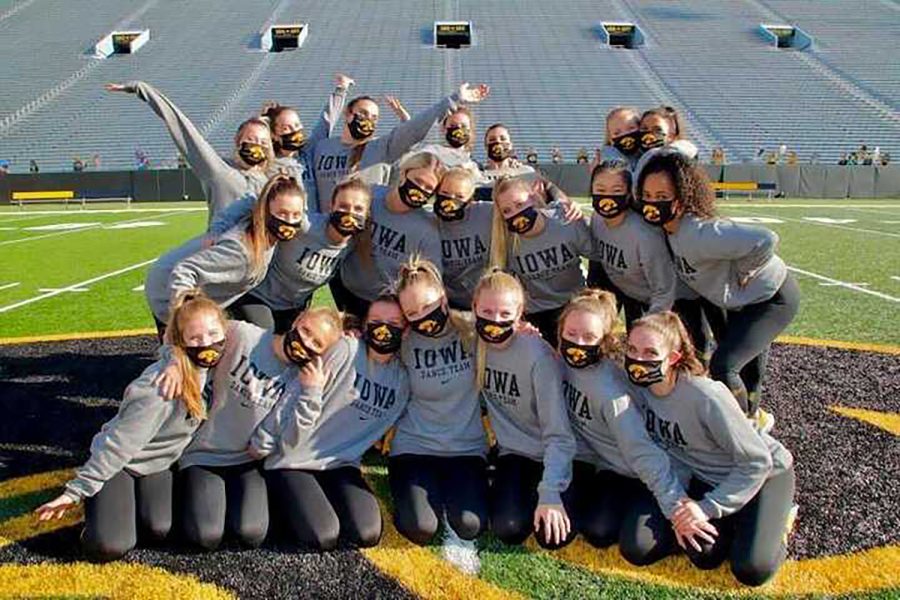 After months of virtual practices and an empty schedule void of game appearances, the University of Iowa dance team is back to work as it prepares for the Universal Dance Association College Nationals in Orlando, Florida.

The dance team usually appears at every home basketball game, football game, and even wrestling meets. Because of concerns surrounding the pandemic and rules put in place by the Big Ten, however, cheerleaders, bands, and spirit squads are not allowed to be present at the games this year.

“It has been challenging not being able to represent the Iowa dance team on the sidelines, but we are still following and supporting University of Iowa Athletics from afar,” UI Dance Team Coach Jenny Eustice said.

When the news arrived that the dancers were cleared to practice in early November, the moment marked a huge highlight of the season, Eustice said.

“We have learned both of our nationals’ jazz and pom routines, so having those opportunities were really exciting for the team,” Eustice said.

The coach said members of the team have talked about how every moment they get to be together is special, because nothing, especially not performing, is guaranteed anymore.

“We are normally going to every football game, every home basketball game, wrestling, and that is a big part of what we do besides … competing at nationals,” Verbrugge said.

Verbrugge said the team is focusing on competition this year, because it is unable to perform at athletics events.

“We are just shifting our focus to what we do and competing at nationals, so it is definitely weird and different, but it allows us more time to focus on our main competition, which is also exciting,” she said.

RELATED: Hawkeye traditions on hold as Iowa prepares to host home football game with no fans in attendance

UI first-year dancer Chloe Broshous said she is excited for the team to showcase the routines it recently learned these past two weekends at nationals.

“We already see the dance coming together as we practice,” she said. “I think it will be very powerful.”

The event will be held in person. According to documents from Varsity Spirit, the organization hosting the event, anyone planning to join must monitor themselves for symptoms of COVID-19 listed by the Centers for Disease Control and Prevention and check their own temperature seven days prior to travel.

Face coverings are required for all guests ages 2 and up — including the athletes, except when on the practice and performance floors. Physical distancing measures will be in place, the website said, and temperature screenings will be required for entry to some locations.

“We are going to have our own bus that is transporting us places so we are not getting mixed in with other [teams],” Broshous said.

Although with these protocols in place it won’t be a normal nationals competition, Eustice said she’s thankful for the opportunity for her team to compete April 27 and 28.

“We are so thankful for the athletic training staff and for their level of care during the pandemic,” she said. “We are excited to represent the University of Iowa on the nationals stage in April.”