The poet and 40-year Iowa Writers’ Workshop professor died on Dec. 14 at the age of 83, having touched the lives of many and leaving a long withstanding legacy of written work in his wake. 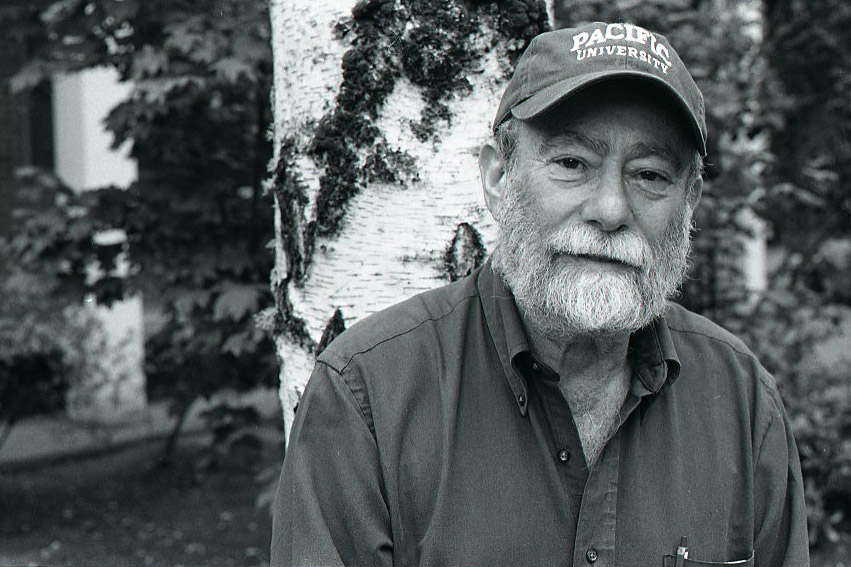 Photo of Marvin Bell at Pacific University in Oregon. Contributed by John Campbell.

In a soft navy vest over a buttoned shirt, poet Marvin Bell read his poem, “To Dorothy” on a couch in front of his MacBook. A pair of dark rimmed glasses bobbed atop his round nose as he spoke to the screen in a softened but confident voice, reciting the words as he had many times before.

The subject of Bell’s poem, his wife Dorothy Bell, stroked his arm and back just out of sight as Bell closed the reading — a three-hour Zoom his friend, International Writing Program Director Christopher Merrill, put together in his honor in November. More than 600 people from all over the world attended to share their favorite poems by Bell, so many that the host of the event, Prairie Lights Bookstore, had to upgrade its Zoom subscription to fit them all.

Bell died a little over a month later on Dec. 14, after undergoing treatment for aggressive, late-stage stomach cancer since September. The poet was surrounded by his family when he died, the stereo playing “You’d Be So Nice To Come Home To,” by jazz trumpeter and singer Chet Baker.

Bell, a staple contributing member of the Iowa City UNESCO City of Literature, touched thousands of lives in his 83 years. He loved jazz music, soccer, witty wordplay, and long discussions about ham radios. His work is not only featured on bookshelves, but in college syllabi nationwide, and one of his poems, “Writers in a Cafe,” is even etched into Iowa City’s “Story Wall” in the Pedestrian Mall. The poem commemorated the city’s designation as a City of Literature in 2008.

Marvin served two terms as Iowa’s first Poet Laureate from 2000 to 2004 and spent four decades as a professor at the Iowa Writers’ Workshop before retiring in 2005 as the Flannery O’Connor Professor of Letters. His book of poetry, A Probable Volume of Dreams, received the Lamont Poetry Selection of the Academy of American Poets, and he was a National Book Award finalist for his 1977 collection of poems, Stars Which See, Stars Which Do Not See. He is celebrated for his invention of the “Dead Man,” a character who appears in a long series of his “Dead Man” poems.

I just learned Marvin Bell passed away tonight and I am heartbroken. He taught me so much as a grad student, but more than anything, he taught me how to write a good love poem. What he wrote to his wife, Dorothy–those first two lines are absolute perfection. #RIPMarvinBell pic.twitter.com/BnvkdPbBPS

Writers around the world know Bell from reading his work in MFA programs or attending his live readings. For many others, however, Bell was a teacher, mentor, friend, father figure, and inspiration who left a vast legacy behind.