Both of Iowa’s swim and dive teams look to build momentum this weekend that can catapult them to the postseason. 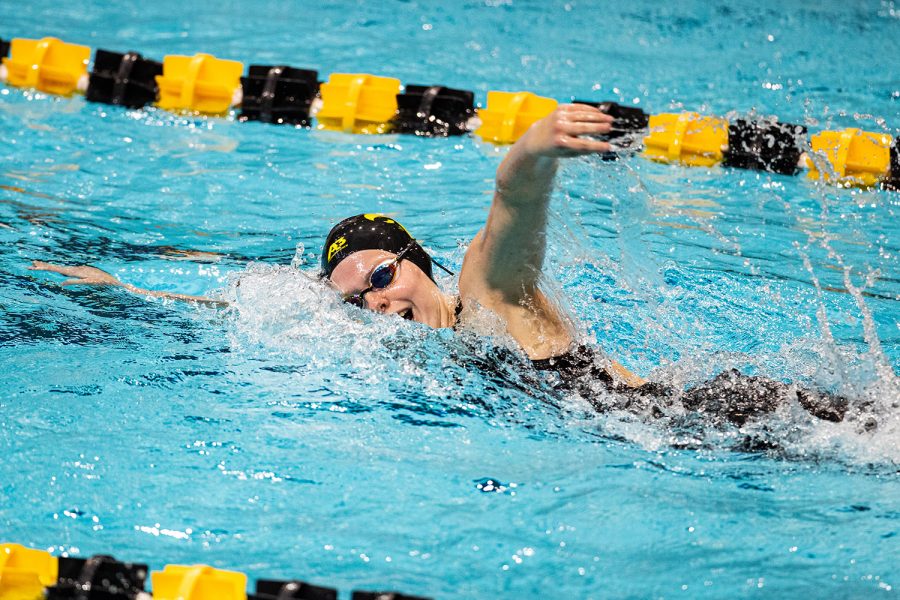 Iowa's Alyssa Graves competes in the women's 1000m freestyle during a swim meet at the Campus Recreation and Wellness Center on Saturday, Jan. 16, 2021. The women's team hosted Nebraska while the men's team had an intrasquad scrimmage.

Both Hawkeye swimming and diving teams head to Minneapolis this weekend to close out the regular season. The men’s team will be competing in a dual meet against Minnesota, and the women’s team has a triangular meet with both Minnesota and Nebraska.

After COVID-19 concerns canceled its season-opening meet against Wisconsin, the men’s team started its season two weeks ago, going 1-1 in a tri-meet with Northwestern and Penn State. The meet was highlighted by several strong individual performances by the Hawkeyes, including five men that received NCAA “B-cut” times.

Junior Mateusz Arndt took home first place finishes in both the 200 and 500 freestyle.

“These meets are really just preparation for our conference championship meet next month,” Arndt said. “We are just trying to make sure we are ready to swim our best by then.”

Arndt was one of the five Hawkeyes, along with Dani Swanepoel, Will Myhre, Aleksey Tarasenko, and Anze Fers Erzen that received NCAA “B-cut” times last meet.

Now, Iowa’s men’s team aims to build up some momentum heading toward the postseason, especially considering the lack of regular season competitions it participated in.

“Lack of competition was certainly a downside of the winter season,” Ardnt said. “But we are just so fortunate that we are able to compete and hopefully we will be able to finish the season strong.”

This weekend’s dual with Minnesota will mark the final regular season meet for the men’s swimming and diving program.

“It will be emotional for everyone,” Arndt said. “But, at the end of the day, it’s just another meet. Maybe after the meet we will have more emotions, but for right now, I’m just focused on swimming.”

The women’s team comes into Minneapolis with a record of 1-2, with a win over Nebraska and losses to both Northwestern and Penn State.

Freshman standout Alyssa Graves has already started to make a name for herself, recording the second-fastest time in program history in the 1000 freestyle last meet.

“I think it is very important to start out strong because you never know what’s going to happen out there,” Graves said. “We’ve been persevering as a team and I think we can do even better as the season goes on.”

Iowa’s women’s team won a court case back in December that temporarily blocks the University of Iowa from cutting the program as was planned due to financial concerns within the UI Athletic Department brought on by COVID-19. Graves says she believes that the uncertainty surrounding the future has helped the team grow closer.

“I think we need to make the best of this moment, which we all are doing,” Graves said. “We are being so positive throughout it all. And we’ve been coming together as a team even more now because we don’t know what the future holds for us.”

“[COVID-19] has just made this year, has made everything difficult, and you throw in having your team being cut on top of that, I think my team has shown a lot of resilience and I’m so honored to be a part of that,” Ohlensehlen said.