The Hawkeyes are looking to grab their first win of the 2021 season in their first match at Xtream Arena. 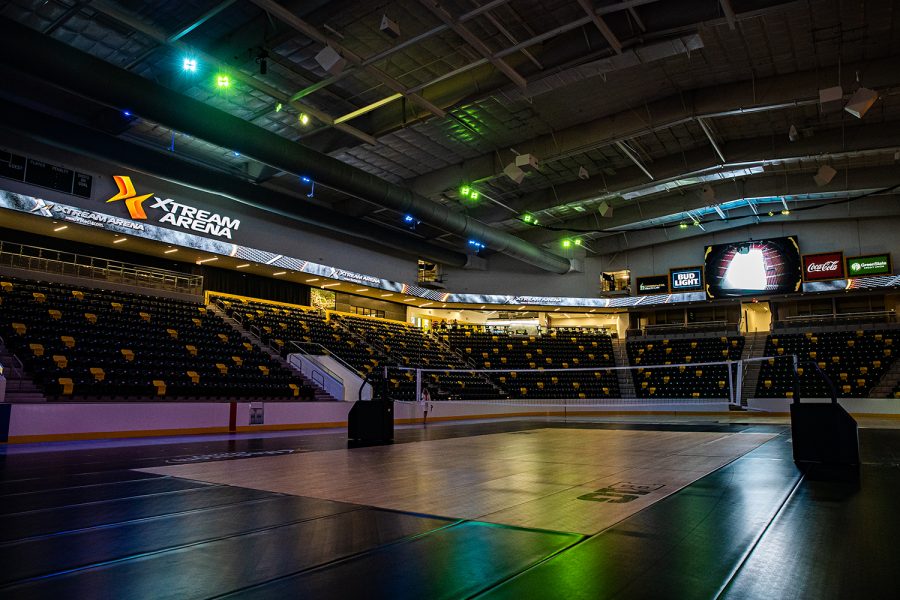 The main floor is seen during Xtream Arena's opening media tour in Coralville on Wednesday, Sept. 9, 2020.

The Iowa volleyball team will begin writing a new chapter of its history this Friday, as it looks to get its first win of the 2021 season in its first game at its new home, Xtream Arena.

The Hawkeyes will host a 1-3 Indiana Hoosier team that is coming off of its first win of the season at Rutgers.

“It was nice to finish the season in Carver in 2019 with a win, so we are pushing to do the same type of thing in Xtream Arena,” head coach Vicki Brown said.

The Hoosiers are currently ranked 13 spots lower than Iowa in the Division I Women’s Volleyball RPI. Indiana is ranked 116 and the Hawkeys check in at 103.

“We are always just out to get wins, we’re always out to win every single point, and ranking high or low, whatever the case may be, a win in the Big Ten is a good win overall,” Brown said. “We had our own personal goals of where we wanted the team to be at this point, so now we will just be executing it with a spin to put our defensive focus toward Indiana.”

Youth figures to rule the weekend for Iowa and Indiana, as both squads started three or more freshmen in their most recent games.

With Kyndra Hansen out due to an undisclosed injury, the Hawkeyes gave Audrey Black the start last Saturday at Purdue alongside fellow freshmen Bailey Ortega and Leanne Lowry.

RELATED: Black, Lowry, and Ortega set to lead a talented group of freshmen for Iowa volleyball

Outside hitter Tommi Stockham is leading Indiana’s group of freshmen starters with a team-high six blocks and four service aces on the season. She is also Hoosiers’ second-leading attacker with 45 kills in 2020-21.

Second-team All-Big Ten outside hitter Breonna Edwards is a nice compliment to Stockham on the floor. Edwards leads the team with 3.29 kills per set, which is good for 10th in the Big Ten.

The Hawkeyes have faced tough competition in Illinois and No. 13 Purdue so far this season. Unfortunately for Brown, her group ranks at the bottom of the Big Ten in kills per set, hitting percentage, assists, digs per set, and service aces per set.

Indiana, however, is not doing much better under third-year coach Steve Aird. The Hoosiers also rank in the bottom half of the league in kills per set, hitting percentage, assists, digs per set, and service aces per set.

“We knew Purdue was going to bring a lot of heat, that has been their M.O. for decades,” Brown said. “The interesting thing about the Big Ten is you are always finding that everyone has their uniqueness in things that they tend to rely on when pressure comes up.”

The first Hawkeye volleyball match in Xtream Arena will have empty stands, but the artificial crowd noise will not take away from the moment.

“There’s not nerves, it’s just excitement,” Brown said. “Anytime you get a new pair of shoes it’s like, ‘OK, hopefully these fit’ but then you put them on, and you walk around and you’re excited to show them off, and that is where we are.”

Iowa’s weekend doubleheader will feature two 4 p.m. starts, and both games will be streamed on BTN+.