Artist Anne Rogers' gallery show, 'Leaving pants on the floor,' is the first show in the Queer Iowan Artist Series, presented by LGBTQ Iowa Archives and Library. The gallery, which is on display until Feb. 15, is located at the Wesley Center. 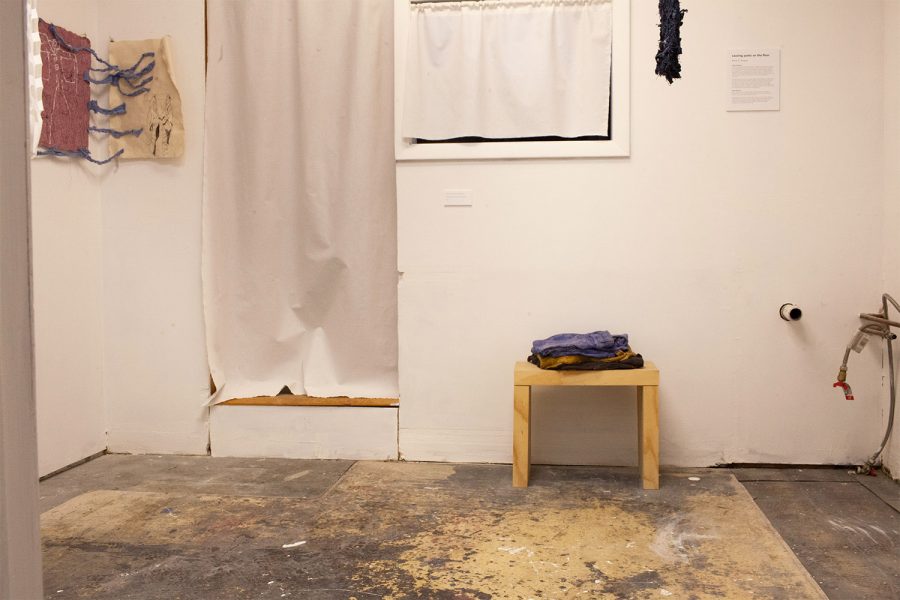 Anne S. Rogers gallery show “pants on the floor” is the first show in the Queer Iowan Artist series. The Art Gallery at the Wesley Center is seen on January 28 2021.

The LGBTQ Iowa Archives and Library is hosting its first gallery show this month in its Queer Iowan Artist Series, a collection by artist Anne S. Rogers, titled, “Leaving pants on the floor.” The series is the Library’s first venture into launching the visual component of the space, said volunteer curator India Johnson.

Housed in the basement of the Wesley Community Center in Iowa City, is the quaint home of the Library, accompanied by the one-room gallery space that holds Rogers’ collection.

Walking into the space, viewers see a cotton cloth laundry hamper hanging from the ceiling, ceramic pants folded in the corner, and various pieces of paper illustrated with ink and gesso drawings of clothing draped on the walls. A closer look will reveal that the paper itself is made of clothing.

Rogers developed an interest in art at an early age. They pursued Art and Sexuality Studies throughout college and went on to get certified in Papermaking at the University of Iowa. Rogers then interned for a paper-making mill in Minneapolis and later, a fiber art center in Española Valley, New Mexico, where they expanded their knowledge and appreciation for the interconnectedness between cloth and paper.

“I think that what draws me to the specific processes I use to make my art, like paper making and weaving and sewing, even drawing to some extent, is the fact that they can become kind of a ritual and I feel like in some ways they mirror domestic work that I’m trying to represent,” Rogers said. “So, the process of doing laundry and the process of doing paper have some similarities in terms of what you put in, the way that you have to kind of move through steps, how thick you’re always needing [it] to be done, and it’s never really finished.”

Rogers’ collection brings an air of levity into the otherwise formal space it occupies. The artist takes what is usually considered a simplistic part of daily routine and considers how it can be repurposed in their art.

If a piece of clothing is too small or fragile, they make it into paper, sew it onto edges, or weave it into rectangles. Their art carries with it the memories they have when wearing those pieces of clothing.

Rogers also maintains that it’s important they keep a sense of humor in their creative process.

“For a while I was doing these durational performances and they were really intense,” they said. “Like, I did this piece where I just only wore six articles of clothing for two months. And then I did a couple of other things that involved walking and clothing, and they just took a lot out of me, and I think that since then I really realized that I need to find humor in my own work for it to be sustainable. I think pants are kind of funny just in general.”

The Queer Iowan Artist series will hold a solo show each month that features the work of an LGBTQ Iowa City artist until July 15. Johnson said audiences can expect to see upcoming themes of familial relations, race struggles, sexuality, and more use of paper and upcycled materials.

“I do think it’s important for queer artists to have spaces to exhibit, especially since that hasn’t always been possible, and I think just like in the really long history of art, women and queer people have been excluded,” Rogers said. “And so, it’s important always for people who like — basically aren’t like, cis men, straight men — to have spaces to exhibit art, no matter what that is and no matter whether or not that’s related to their own experience as queer people.”